If you've ever spent time swimming in the ocean, then you know just how difficult it can be to propel yourself through water, which is why it's even more incredible that certain sea creatures can get up to such impressive speeds.

Today, we're going to take a look at the fastest sea animal in the world.

Let's dive in, shall we?

What Is The Fastest Water Animal?

Move over, Tesla. We have a new speed demon in town.

The black marlin is the fastest animal in the water, reaching speeds of up to 82 miles per hour. You can find the black marlin jetting through the waters of the Pacific and Indian oceans.

The black marlin is just slightly bigger than its sailfish cousin, topping out around 15 feet in length. Yes, this fish is a true torpedo.

Beyond that, they can easily reach up to 1,650 pounds, which not only makes them a serious feat to catch, but has landed them top positions 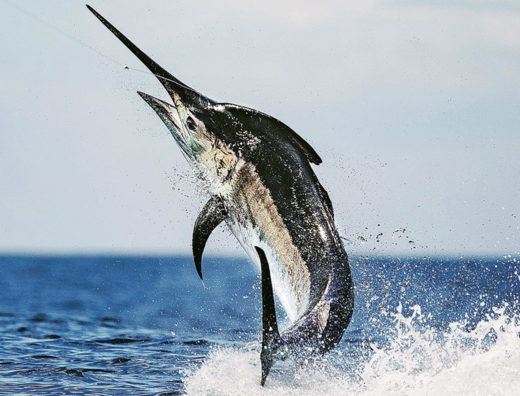 as the biggest fish ever caught. To tell black marlin apart from their sailfish cousins, you can look at the dorsal fin, which is relatively short, low, and round in comparison.

FUN FACT - Not only is the black marlin the fastest fish in the ocean, but it is also the fastest animal in the world, swimming at speeds faster than cheetahs run. 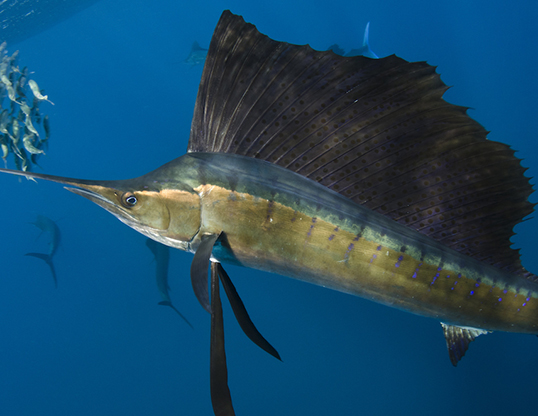 The sailfish is a type of billfish that can reach recorded speeds of up to 68 miles per hour, leaping out of the water and plunging hard into schools of fish for tasty snacks.

While sailfish might look like swordfish, they are a bit smaller, often growing to around 11 feet long with an average weight of 182 pounds. However, similar to their swordfish cousins, sailfish have long, tapered bodies compressed for a higher top speed.

Their tops are dark blue, while their bellies are silver with golden spots.

Sailfish get their name from their spectacular dorsal fins, which run almost the entire length of their backs. When trying to reach higher speeds, sailfish have the ability to fold their dorsal fin into a small groove on their back to become more hydrodynamic. In fact, sailfish really only put their dorsal fin upright while hunting.

To catch fish, the sailfish uses its long beak like a sword, slashing at its prey.

FUN FACT - Sailfish often work together in groups to disrupt large schools of fish, and they enjoy eating anchovies and sardines.

The swordfish is one of the most popular marine animals in the sport of fishing, though it is also one of the most elusive. These billfish have round, elongated bodies and are some of the fastest in the ocean.

The reason we refer to them as "billfish" is because of the large, sword-like beak on the tip of their face.

Similar to its close cousins, the swordfish is shaped like a torpedo with a long, compressed body, which allows it to maintain a high average speed. 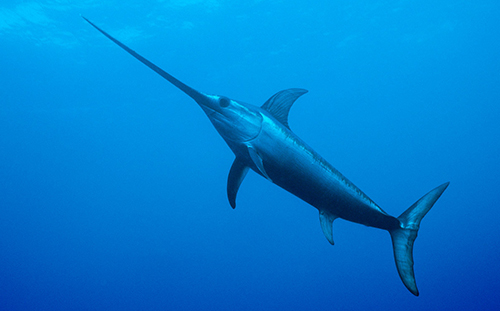 Swordfish are pretty large fish, often growing to 15 feet long and weighing around 1,180 pounds on average. You can find these fish in open seas and near shorelines, though many dive as deep as 200 feet.

In terms of fishing for swordfish, your best bet is to stick to the Atlantic from Argentina to Newfoundland or the Pacific from Chile to Oregon.

FUN FACT - The swordfish will lose all of its scales and teeth by the time it reaches adulthood.

The yellowfin tuna is the fastest tuna species, swimming at speeds of up to 50 miles per hour. It is one of the strongest fish in the ocean relative to its size and one of the most crucial species for fisheries all over the world.

This warm-blooded fish is found in warmer waters throughout the world's oceans, often growing up to 400 pounds.

One thing that is truly awesome about this fish is that it is a long-distance swimmer. Yellowfin tuna will often swim across oceans, forming new schools and traveling with other fish and sea animals like dolphins and porpoises.

Because this particular fish is so strong, fishermen see it as a true challenge and testament to one's fishing skills. Unfortunately, this tuna species is threatened by commercial fishing due to its tasty flesh.

Pilot whales are typically black, dark grey, or dark brown, and some have small grey patches behind their dorsal fins. 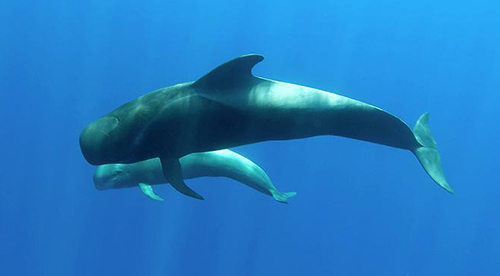 They also have massive, melon-shaped heads and can grow up to 24 feet long.

Considering how large they are, it makes their speed that much more impressive.

FUN FACT - The pilot whale got its name as it was thought that other whales in the pod would follow a single whale in the group as the "pilot." 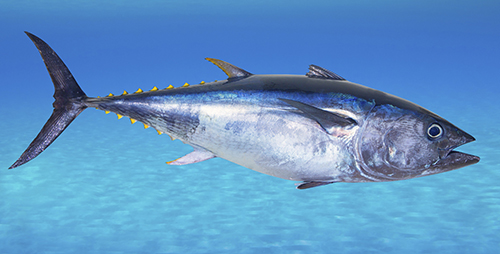 Experts have clocked in a bluefin tuna recorded speed of 43 mph.

Adult bluefin tuna can grow anywhere from 6 to 8.5 feet long, weighing between 500 and 550 pounds.

Similar to the yellowfish, the Atlantic bluefin tuna is an endangered species due to overfishing.

FUN FACT - The longest bluefin tuna ever caught was around 12 feet in length and weighed about 1,500 pounds. This powerful fish can live for up to 50 years, and females can produce up to 30 million eggs at once!

While the bonito, otherwise known as the skipjack tuna, may be a small fish, you can't underestimate it with such impressive speeds.

The bonito is part of the mackerel family and can be found in the Atlantic and Pacific oceans.

This fish, which typically averages out at about three feet long with a blue and silver body, can reach speeds of up to 40 mph!

You'll often find the Bonito fish traveling throughout temperate and tropical waters, spending its time near the shoreline.

The bonito is what we call a "migratory" fish, meaning it'll make its way to different parts of the ocean throughout its lifetime. 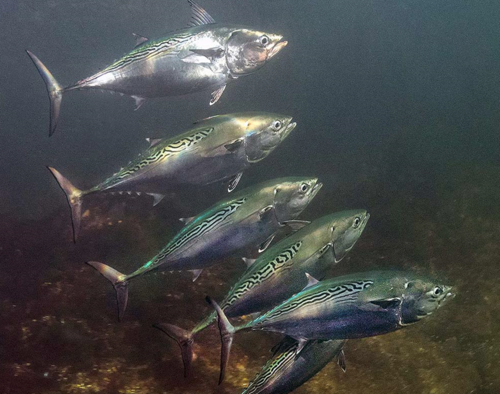 For this reason, many bonito fish end up in places like Florida, Nova Scotia, and Chile! The bonito is not to be confused with the Pacific Bonito, which makes its way from the Gulf of Alaska to Chile! 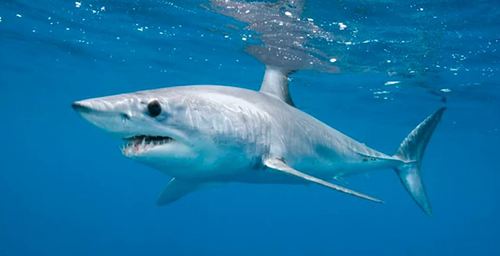 If you thought the billfish was scary, just wait until you hear about the mako shark!

Not only is the mako the fastest shark in the water, but it is also one of the fastest animals in the world.

These powerful, warm-blooded marine animals are related to great whites, though they are a bit smaller, ranging from around 8.5 to 15 feet in length and weighing about 1,400 pounds.

Similar to most of the other sea creatures we've already discussed, the Mako shark has a torpedo-like shape, which gives it its speed. You can tell a Mako apart from other sharks thanks to its metallic blue top and white belly. However, it is worth noting that there are two species of Mako, including the longfin and shortfin mako shark. The longfin mako gets its name from its long pectoral fins. It also has much smaller eyes than its shortfin cousin.

Both of these sharks have large mouths with wild-looking teeth.

The longfin mako enjoys temperate and tropical waters, while the shortfin mako shark prefers warm waters found in the Gulf. With that said, you can find both of these sharks swimming directly offshore, though some will dive down to depths of around 500 feet.

FUN FACT - Makos hold the record for the fastest long-distance travel at up to 1,300 miles in 37 days.

Despite the name, flying fish don't actually fly. However, when they leap high out of the water at speeds of up to 35 mph, it certainly looks like they're flying!

As of today, there are around 23 flying fish species in the world, some of which jump so high that they accidentally land on decks of high boats. 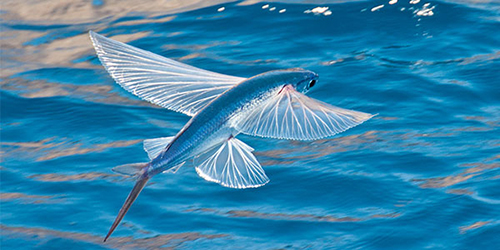 provide them with a more hydrodynamic shape for moving fast through the water.

You can find flying fish in many places throughout the world. They are found in the Atlantic ocean, moving from Argentina up to the Caribbean, and even further to the Gulf of Mexico and Maine. However, you can also find them in the Pacific Ocean, all the way from Peru to Southern California.

Unfortunately, they are pretty tasty fish, which is why they are often the prey of billfish, such as marlin fish and dolphins. 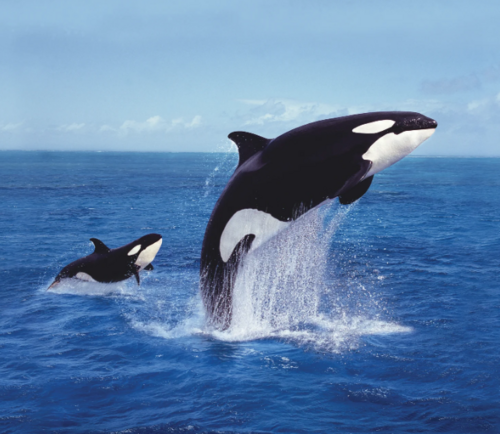 The killer whale, also known as the orca, is oene of the most intelligent and beautiful creatures in the animal kingdom.

They also happen to be some of the fastest sea animals in the ocean. Experts have clocked killer whales at around 32 mph when leaping out of the water.

Not only are they fast, but they are also MASSIVE.

Adult orcas can grow up to 31 feet in length, and males are often much bigger than their female counterparts.

dorsal fins. Of course, it's even easier to tell this species apart from the other fastest animals on this list, thanks to its unmistakable black and white body colors.

The killer whale has a wide, rounded head with pointed teeth that fill its very large mouth. Its flippers are shaped like paddles and are relatively large compared to the rest of its body.

When living in the wild, killer whales like to hang out in cooler water near coastlines. However, some of them will make their way into rivers if they're deep enough. You can find killer whales in the Atlantic, Arctic, and Pacific oceans. Some of them even live near the Gulf of Mexico and the Caribbean.

If you want to see killer whales up close, you can visit Seaworld Orlando, the Port of Nagoya Public Aquarium, and the Miami Seaquarium.

Head over to our Are Orcas Dolphins Or Whales, and Do Orcas Attack Humans articles to learn more about this incredible species!