While many anglers see fishing as a source of food and fun, other fishermen see it as a glorious endeavor. So today, we're going to dive in and explore these massive, world-record fish caught by some of the bravest, badass fishermen of all time.

Each world record title below was recorded and approved by the IGFA All-Tackle World Record Association. Of course, throughout the past few decades, there were cases of fishermen catching much larger fish, though because they didn't meet the requirements of the IGFA, or were caught by multiple people, the records didn't count.

The 17 Biggest Fish Ever Caught In The World

This 2,664-pound white shark is the biggest fish ever caught.

When Alfred Dean reeled in this massive white shark in Ceduna, Australia, back on April 21, 1959, it blew the fishing community out of the water.

Alfred Dean caught the white shark using a porpoise for bait. As of today, it holds the IGFA record for the biggest fish ever caught. 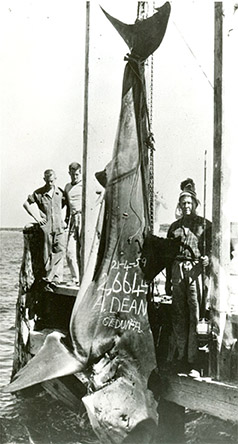 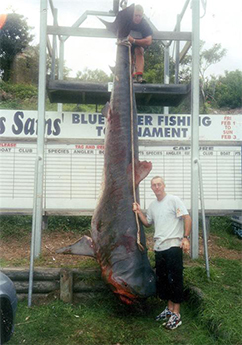 While many people refer to this world record as "controversial," Kevin J.

Clapson caught this massive tiger shark back in 2004, breaking a world record that has been around for 40 years.

But, unfortunately, because this tiger shark was only 11 ounces heavier than the Walter Maxwell tiger shark caught in the early 1960s, they made it a tie.

On October 18, 1987, fisherman Terje Nordvedt reeled in the biggest Greenland shark that had ever been caught.

Hooked off the coast of Trondheimsfjord, Norway, using herring for bait, this Greenland shark weighed in at 1,708 pounds. 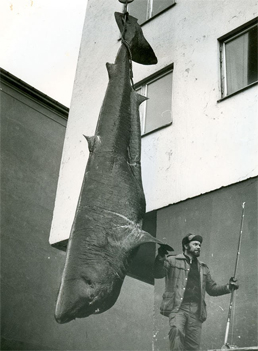 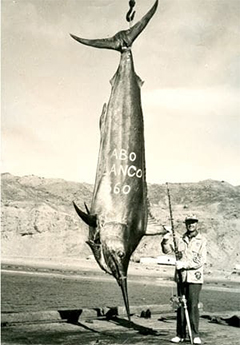 While Alfred Glassell, Jr. originally set this world record back in 1952, it was in 1953 that he set the world for the biggest black marlin catch.

Within days after his first world record, someone else topped it. However, a year later, Glassell caught this 1,560-pound black marlin, which, to this day, is the largest black marlin ever caught. The massive fish reportedly leaped from the water 49 times during the battle.

Glassell also made his name onto our list of the Biggest Marlin Ever Caught.

There is no doubt that Nova Scotia is famous for Atlantic Bluefin tuna fishing.

However, Ken Fraser got quite lucky that he was out fishing back in 1979 instead of today, as the sport of fishing bluefin tuna is far more regulated than it is now. But he was able to reel in and bring home the biggest tuna ever caught and to this day, his record has not been broken.

The Atlantic Bluefin Tuna is also one of the fastest fish in the ocean, reaching speeds of 44 mph! 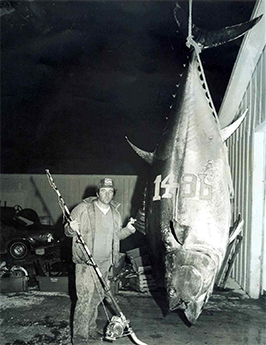 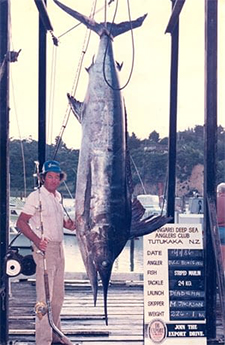 Amorium used a Molecraft lure to reel in this big Atlantic Blue Marlin.

Back on May 31, 1982, fisherman Jay de Beaubien reeled in a 1,376-pound Pacific Blue marlin that caught the all-tackle world record.

Using a Kita Lure, Beaubien was able to catch this marlin off the coast of Kona, Hawaii. 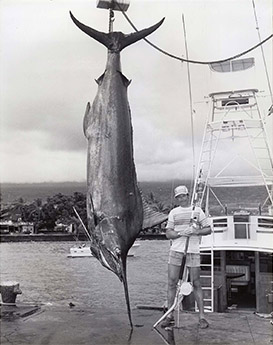 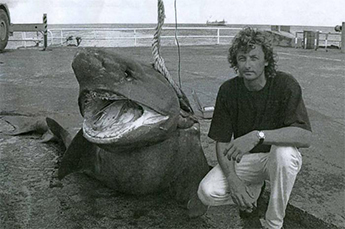 Back on November 21, 2002, Clemens Rump reeled in this elusive sixgill shark off the coast of the Ascension Islands in one of the Atlantic Ocean's most remote locations. Clemens was able to catch this giant fish using live bait.

The Great Hammerhead Shark is one of the most identifiable sharks in the ocean.

Using a stingray for bait, Bucky Dennis was able to reel in this 14'5" shark off the coast of Boca Grande back in 2006. The hammerhead hauled Dennis' 23' boat into the Gulf for more than 12 miles before it gave up. 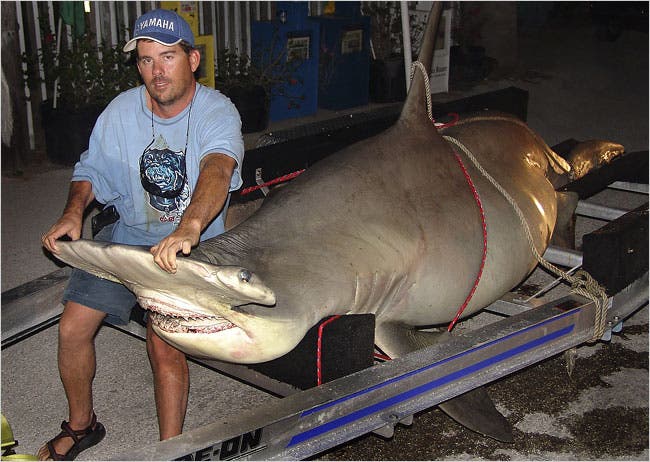 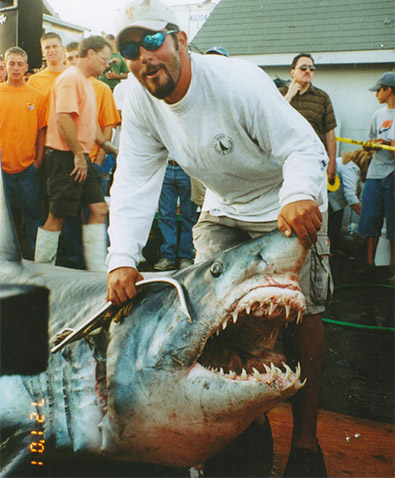 Out of all the sharks in the ocean, the shortfin Mako shark is one of the fastest.

This shortfin mako shark was certainly no exception to the game.

After three hours of wrangling, Luke Sweeney caught this massive shark back in 2001 at the Oak Bluffs Master Shark Tournament.

After a long four hours and 11 minutes, Donna Pascoe (56) of Three Kings, New Zealand, caught this massive Pacific Bluefin Tuna with a traditional rod and reel.

This was such an enormous fish that the four men on the boat could not retrieve it from the water. 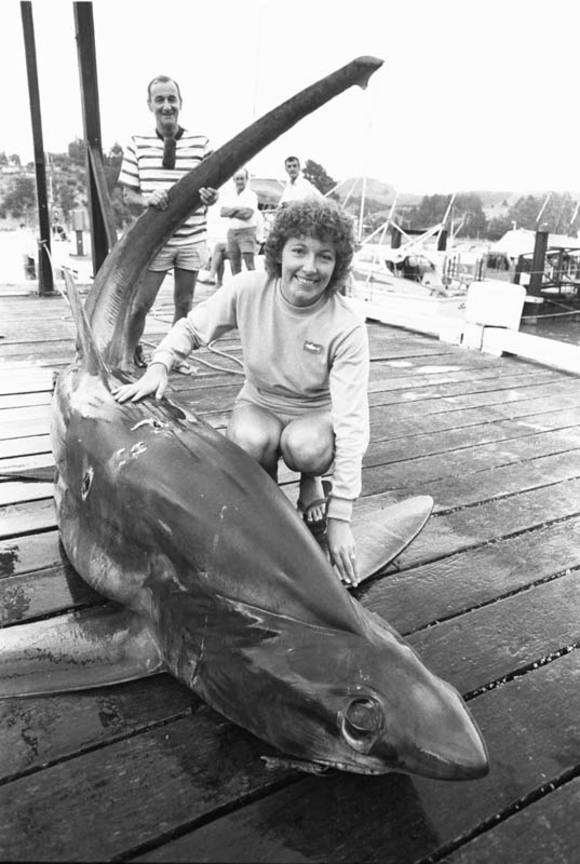 On February 8th, 1981, Dianne North caught this Bigeye Thresher Shark off the coast of New Zealand. To hook this huge fish, she used Kahawi salmon as the bait, battling it for more than four hours before she was able to reel it in. The interesting part was that David Hannah reeled in a 767-pound thresher shark just a few years later using the same bait.

In 1982, Warren Girle caught this massive dusky shark off the coast of the Longboat Key in Florida.

To this day, Girle holds the world record for the largest dusky shark ever caught.

The bull shark is one of the ocean's most dangerous & aggressive sharks. So it's no surprise that this 697-pound muscular bull shark landed on this list when Ronald de Jager reeled it in off the coast of Malindi, Kenya, back in March of 2001. For bait, Jager used live yellowfin tuna. 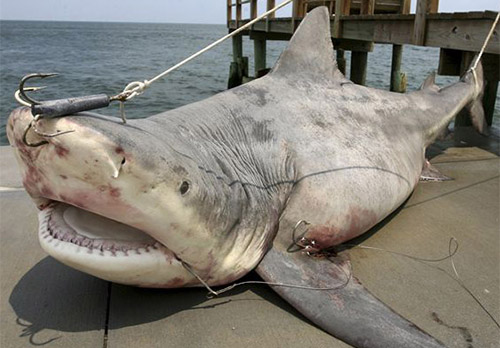 Out of all the large fish on this list, the goliath grouper certainly lives up to its name as one of the largest fish in the ocean.

Lynn Joyner caught this monster fish back in 1961 in Fernandina Beach, Florida, with a live Spanish Mackerel. This spot in Fernandina Beach remained an ultra-popular spot up until the 1990s, when the grouper population started declining. 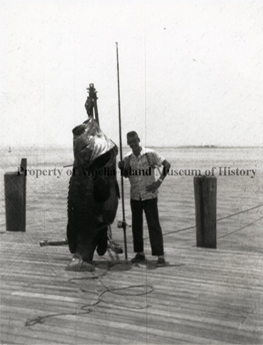 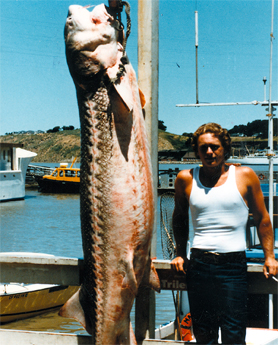 For nearly seven hours, Joey Pallotta battled this white sturgeon after having to jump on his friend's boat, which was much larger.

They estimated that this 9'6" fish had lived for more than 100 years.

To this day, this white sturgeon is the largest freshwater fish ever caught in North America with a rod and reel.

After hiking up a long way to the river, Bill Valverde and his buddies realized that they had left their bait back at home.

Luckily, they were able to dig up a couple of earthworms to use for bait.

That day, they caught this 279-pound world record alligator gar, the biggest fish ever caught in freshwater with a rod and reel in Texas. 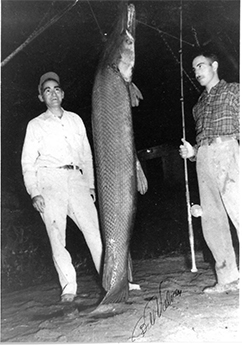