Manta rays are some of the most awe-inspiring creatures in the ocean. Beyond being the most graceful swimmers, their breathtaking wings and unique, diamond-shaped bodies differentiate them from any other animal on Earth.

Even your average manta ray has a wingspan of around 23 feet.

Of course, you're here because you want to know more about the world's largest manta ray.

Dive in with us and learn all about the largest manta ray ever recorded!

The Biggest Manta Ray Ever Recorded

The largest manta ray ever caught and recorded was a gargantuan 30 feet long!

This manta ray got its place in the Guinness World Records when it was found back n 1920.

Unfortunately, no one was able to record the weight of this large manta ray.

However, the heaviest manta ray ever recorded was a 5,000-pound female ray found in 1933. 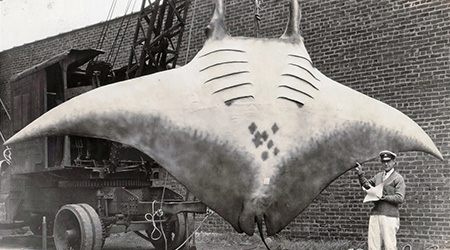 Though she was an extremely bulky ray, her wingspan was only around 20 feet, which is relatively small in the world of oceanic manta rays. She was captured by a New York silk merchant by the name of Captain Khan as he was sailing off the coast of New Jersey.

This huge ray got tangled up in his boat's anchor line during a fishing trip, towing him for around five miles over the course of three hours. Because he thought she would capsize his boat, he had to catch her.

The question you might be wondering to yourself is,

Were ancient manta rays larger than those we know today?

Unfortunately, we do not have any evidence of giant manta rays ever existing millions of years ago. The only remains that we've found, which are from the Jurassic Period around 150 million years ago, match the size of manta rays today.

The neat thing is that the modern giant oceanic manta ray species is one of the largest ocean species to exist today.

The funny thing about manta rays is that they are some of the largest creatures in the sea, yet they only feast on some of the smallest creatures around. In essence, these are not predatory animals by any means.

On the totem pole of size, these rays are the fifth largest fish in the ocean. The only fish that are large include tiger sharks, great white sharks, whale sharks, and basking sharks. The largest fish is a whale shark, which is around 60 feet long on average.

In the Batoidea order, which is a family of animals, including manta rays, stingrays, and skates, they are the largest species. Stingrays, on average, have a wingspan of around five feet.

Why Are Manta Rays So Large?

Manta rays are what we call filter feeders, meaning they only eat small organisms like shrimp and plankton. These creatures feed in a unique manner, using their "O" shaped mouths to such food in water into their mouths.

After taking in a big gulp of water and plankton, they will close their gill rakes and push the water back out to separate it from the food.

FUN FACT: Manta rays are pretty smart when it comes to taking in as much food as possible. Many of them will perform barrel rolls while feeding to get in more plankton with every mouthful.

Even though these creatures are extremely large, they are actually very fast, swimming up to around 15 mph when in a hurry. The good thing for them is that they have very few predators, including killer whales and sharks.

You'll find two main types of manta rays out in the wild, including the reef manta ray and the giant manta ray.

Reef manta rays are smaller. Most of them don't exceed 12 feet in length. You'll find them throughout the sunnier parts of the Indian and Pacific Oceans. Scientists believe their smaller size has to do with evolutionary biology, as they stick to island shorelines and reefs, which don't have much room to grow.

With smaller sizes, they don't have as big of a need for food, which makes them quite competitive in reef environments.

Giant oceanic mantas are more commonly found in deeper oceans. They are migratory animals, using vast ocean currents to move from one place to the next in search of abundant food. 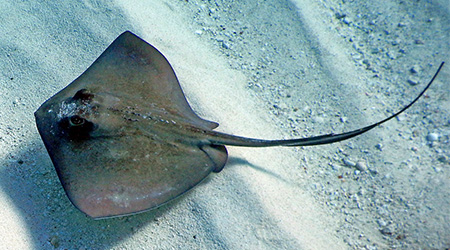 While the first glance at a manta might make you think you're looking at a stingray, there are many characteristics that separate these two species.

With that said, both of them belong to the Myliobatiforms order, though mantas evolved from stingrays.

Both of them have flat bodies and unique pectoral fins that extend from their heads.

So, what is the difference between manta ray vs stingray?

The main thing that separates mantas stingrays is that they do not have barbs or stingrays.

However, they still have a caudal spine, which resembles the stinger that they evolved away from over millions of years.

The point is that mantas do not sting. Stingrays, on the other hand, do.

Stingrays are also bottom-dwelling sea creatures. They have mouths on the bottoms of their bodies that they use to pick up small creatures on the sea floor. Mantas travel throughout the ocean and have mouths that lie at the front of their heads.

FUN FACT: Manta rays are one of the few sea creatures known to jump out of the water and put on unique displays. Scientists aren't sure why they do this, though they suspect it has something to do with shaking off parasites, escaping predators, or giving birth.

All About Manta Rays

These large fish are members of the Chondrichthyes class in the Myliobatiformes order and the Mobulidae family.

They are also part of the Manta genus. For many years, scientists believed that there was only a single species in this genus, which they called Mobula birostris. However, it has recently come to light that there is another species called Mobula alfredi.

FUN FACT: The word "manta" comes from the Portuguese and Spanish word for blanket or cloak. Long ago, giant manta rays were targeted and captured using blanket-like traps. Since then, the name has remained.

These unique structures help them channel food and water into their mouths.

FUN FACT: These are the only vertebrate animals in the world with three paired appendages. 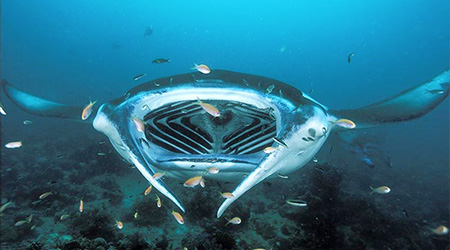 The giant manta makes seasonal visits to various coastlines and is one of the largest migratory species in the ocean. You'll often find this species near seamounts, offshore pinnacles, and oceanic island groups.

They seem to vary the timing of their visits by zooplankton movement, mating behavior, seawater temperature, seasonal upwelling, and tidal patterns.

While most of them live solitary lives, they will often congregate at mating and feeding sites.

They eat a wide range of planktonic organisms, including shrimp, decapod larvae, mysids, copepods, and euphausiids. Some will even eat small fish as well.

FUN FACT: Manta rays are in a constant state of motion, as they need to swim to stay alive. With the consistent forward motion, they can push water over their gills to extract oxygen. If they don't swim, they don't get the oxygen they need for survival.

The giant manta can be found worldwide in tropical and subtropical waters. Many even spend time in temperate waters, mostly in productive coastlines and offshore oceanic waters.

Some scientists have even observed this species in intercoastal waterways, bays, oceanic inlets, and estuarine waters. The giant manta species loves cooler waters, though their temperature preferences typically vary by region.

Mantas found off the United States east coast will often spend time in waters that are anywhere from 66 to 71 degrees Fahrenheit. However, those that spend their time off the coast of Indonesia and in the Yucatan Peninsula enjoy water temperatures between 77 and 86 degrees.

FUN FACT: Mantas are covered in a unique mucous film, which is there to provide protection from harmful bacteria. Without this film, they are more susceptible to sickness. If you ever go swimming with mantas, make sure to never touch them, as this could remove their film.

Giant mantas don't have the greatest reproduction abilities, especially compared to other species of cartilaginous fish. They will typically only give birth to a single pup every 2-3 years, with the gestation period lasting for around 12 months.

Scientists don't have much information regarding the growth and development of the manta birostris, though we do have reports of these giant creatures living to be around 40 years old.

One of the biggest threats to these gentle giants is fishing. Not only are they often targeted by commercial fishers, but they also get disproportionately swept up in bycatch. This is an issue for several fisheries around the world throughout their environmental range.

However, we now know that these creatures are most susceptible to artisanal gillnet and purse-seine fisheries.

Experts have yet to find an adequate way to address these issues, and there aren't many regulatory measures put in place at this point.

Asian markets have a high demand for manta and mobular gills, and the demand seems to be rising every year. The increase in manta products is becoming a major problem as the international gill raking market continues to expand. This is especially common in the Indo-Pacific regions.

Many experts have observed species declines up to 95%.

Their gill rakes are very popular in the world of Chinese medicine, even though we don't have scientific evidence of their health benefits. With that said, this trade brings in around $30 million in net revenue every year. Unfortunately, because mantas have a long reproduction cycle, this type of trade puts them at serious risk.

Not only are these large creatures safe to swim with, thanks to the fact that they are not predatory animals, but they are also incredibly friendly creatures. If you ever get a chance to go scuba diving with mantas in the open ocean, we highly recommend it, as it can be a life-changing experience.

Manta rays have long been of high value because of their gill rakers, which are a prize of international trade. However, they were put on the Endangered Species Act list in 2018, thanks to NOAA Fisheries, to give them a bit more protection.

What Eats a Manta Ray?

Mantas have very few natural predators due to their large size. Their primary predators include sharks and killer whales. Humans are also predators for these creatures, as many consume manta rays. In some cultures, the fish is considered a delicacy.