While we often refer to orcas as "killer whales," killer whales are dolphins! We know it might be a bit surprising and heartbreaking to have your whole view of one of the ocean's most famous creatures completely flipped upside down. It's okay. We're here to explain and make things better.

Dive in with us as we learn more about this unique and fascinating dolphin species.

Are Orcas Whales Or Dolphins?

So, as you know now, the killer whale is actually part of the dolphin family. In fact, these whales are the largest dolphin species out there, often growing to weigh as much as 19,000 pounds and growing to more than 30 feet long!

It is worth noting that all dolphins, whales, and porpoises are classified under the Cetacea order.

However, because orcas have teeth, they fall even deeper into the Odontoceti suborder, which is why we refer to them as "toothed whales." 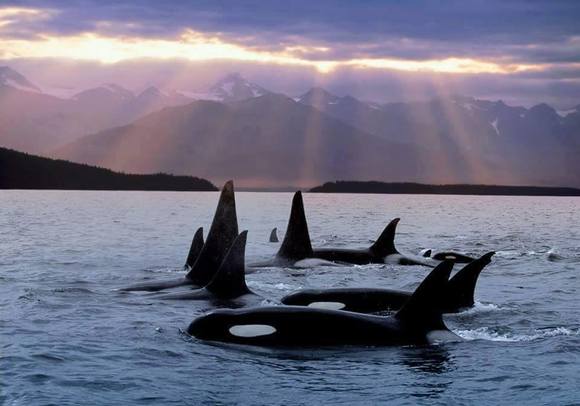 To get even more specific, we would classify them under the dolphin family (Delphinidae), which stands for "oceanic dolphins." These orcas live in this family along with false killer whales and long-finned pilot whales.

Why Are Orcas Called Killer Whales?

The killer whale got its name due to the fact that it is such a ferocious hunter. So, of course, with the name "killer whale," it's easy to see why so many people are confused when it comes to this species' family.

Many historians believe that the killer whale got its name from ancient whalers and sailors, who observed how fierce of hunters resident killer whales were. As a result, ancient sailors referred to the species as "asesina ballenas" or "whale killers."

Eventually, the whale killer name was flipped around, giving these marine mammals the "killer whale" title that they go by today.

Fun Fact: Orcas are even known to eat moose in the wild!

While they certainly didn't earn a spot on our most dangerous sea creature list, it's worth noting that they are apex predators at the very top of the food chain. Orcas are insanely powerful creatures. There aren't any other marine mammals or oceanic creatures that will try and challenge them. Even the great white shark knows not to mess with the Orcinus orca, as the great white may very well end up as dinner.

Since we have determined that orcas are in fact dolphins, and that they are indeed dangerous, you may be interested in our do dolphins attack humans article.  The answer may surprise you!

Killer whales are one of the fastest sea animals, traveling up to 30mph, ripping apart just about any other animals that swim in their way thanks to their three-inch-long, razor-sharp teeth. But, beyond having serious speed and muscle, marine biologists note how smart these animals are as well, which is one of the reasons they are such incredible hunters.

To our knowledge, there is no historical evidence that a killer whale ever ate a human. In fact, there seems to be a universal rule in place telling them not to, as they've certainly had the opportunity many times.

Beyond humans, however, orcas will eat almost anything, including whales, sharks, sea turtles, squid, penguins, sea lions, seals, small fish, and other dolphins. In many cases, they'll go above the surface of the water to catch a sea bird.

Because they are so intelligent, they've developed unique hunting methods over many years, giving them creative ways to score good eats. For example, some whales will create waves as well as beach themselves in order to knock seals off of their icy platforms. They will also use cooperative hunting techniques to catch larger prey.

FUN FACT: Dolphins are such intelligent animals that they are the only marine mammals that have passed the self-awareness mirror test.

Where Are Killer Whales Found? 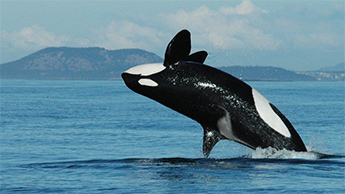 Killer whales can be found in multiple oceans around the world. They are only the second marine mammals to humans in terms of wide distribution range.

While most killer whales prefer hanging out in colder waters, they have also been spotted deep in tropical waters. Some have gone as far as freshwater rivers, including the Elbe, the Thames, and the Rhine.

Some of the few places that these orcas have not been spotted include the Baltic Sea, the Black Sea, and a few Arctic Ocean regions.

How Do Killer Whales Communicate?

Killer whales have a unique way of passing on information and knowledge to their younger generations. They will often pass down helpful information, such as where to find prey, how to catch prey, and what kinds of animals to avoid.

Similar to humans, they've spread themselves throughout the world and evolved to have distinct "accents" to communicate with each other in their exclusive pods or families. With so many prey species to choose from, they've had the ability to develop specialized language.

Marine biologists have studied different killer whale family groups eating different types of animals. They believe these powerful animals decided to eat different things to avoid competing with one another.

Over the years, these groups have developed different genetics alongside their unique cultures and appearances.