Scary Pictures Of The Ocean

Here at the Center For Surf Research, we love the ocean. No matter where in the ocean you find yourself, you can experience beauty all around you.

Of course, we're also aware that in the very depths of our own seas lie the most mystifying and bone-chilling earthly entities. If you're already fearful of the ocean, we urge you to proceed with caution.

With that said, let's dive into the depths and check out some really scary ocean pictures. 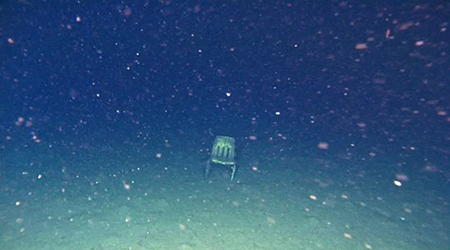 The ocean floor is filled with creepy and wild sea creatures that no one wants to come in contact with.

But very depths of the ocean are void of light and impossible to for humans to reach without the help of serious pieces of technology.

When we're able to get enough light down into the dark abyss to see what lies beneath the surface, we stumble upon some unexpectedly strange things.

This image will most likely haunt me in my dreams. Ironically enough, it's just a piece of trash that accidentally made its way to the ocean's depths. All I can imagine is a pirate ghost a la Pirates Of The Caribbean sitting placidly on this chair the bottom of the ocean floor waiting to drag my soul somewhere even more horrifying.

Deep Dive In The Pacific Ocean

Long ago, the USS Saratoga sunk into the Pacific Ocean, slowly becoming home to several coral and fish species.

One lucky photographer captured the most unique and terrifying photo of the ship's hawsehole, which bears striking resemblance to the mouth of a giant fish.

The sheer size difference between the diver and the hawsehole is what earned this image it's place on our list of underwater scary ocean pictures. 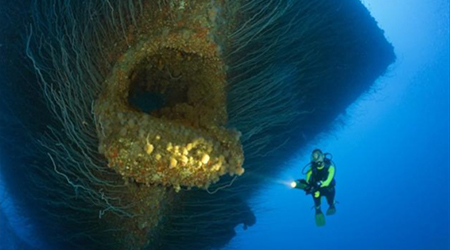 And while the hawsehole is completely harmless, the real question is, 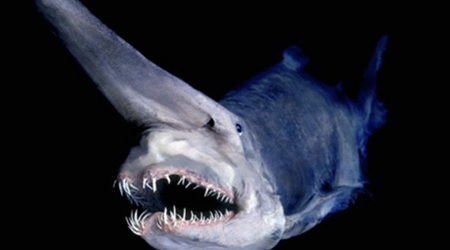 There are few species of animals that I would be happy to never see again. And avoiding all contact with a goblin shark is high on my to-do list.

These types of sharks are some of the scariest-looking creatures in the world. It makes you wonder if the concept of goblins was based on these fascinatingly pointy features and toothy profile.

While these sharks aren't very large compared to their cousins, these creatures should certainly not be

messed with. This unique species has an array of needle-like teeth that could easily kill you by penetrating your skin and leaving you to bleed out in the ocean.

Of course, while tiny creepy crawlies that sneak around in the dark are always worrisome, it is even more terrifying to come into contact with a creature that is larger than life. The lion's mane jelly is one of the biggest creatures in the sea.

This photo of a diver swimming next to one of these massive jellies is an absolute fright fest.

Small jellyfish are terrifying enough. In fact, one of the most dangerous creatures on Earth is the box jellyfish. 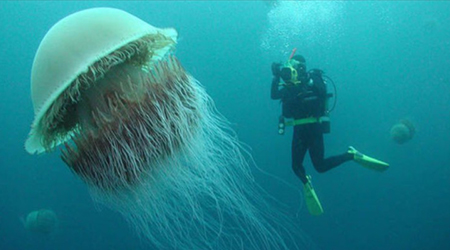 When humans get stung by this little sea creature, they experience pain said to be incomparable to anything else. One of the main symptoms of getting stung by these little jellies is a "sense of impending doom."

If that doesn't sound like your worst nightmare, then I don't know what does.

Diver In The Ocean Depths 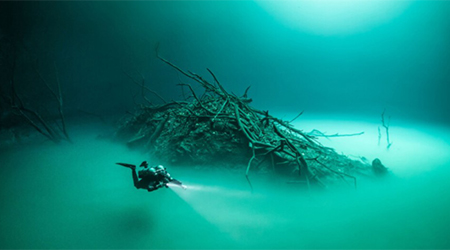 There are certain pictures in the world that can make your stomach drop and this is one of them. Thalassophobia is a very common phobia that involves persistent and intense fear of deep bodies of water, such as the sea or the ocean.

Seeing a picture like this can instantly strike a fear of deep water into the minds of almost any sane person, as there is nothing scarier than the unknown. We don't know much about the deepest parts of the ocean.

In fact, we know more about other planets in our solar system than the deep sea.

The deep sea explorers who navigate in open water, pioneering new underwater travels, are some of the bravest humans on Earth.

This is a picture of a giant squid that has washed up onshore. If you look up giant squid phots, you'll probably get a lot of reimaginings of Cthulhu. However, giant squid actually exists, and many humans have seen them swimming in the open oceans.

Not long ago, Dr. Edie Widder and Dr. Nathan Robinson dropped a deep-sea camera many leagues beneath the surface to capture photos of the things that lay beneath the Gulf Of Mexico. 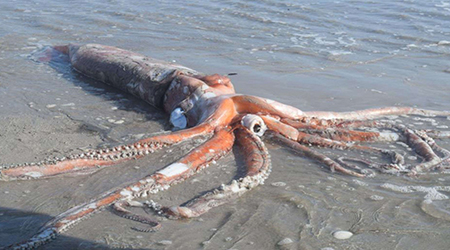 They ended up capturing one of the most scary deep sea pictures we've ever seen of a giant squid lurking in the dark.

They had to review more than 20 hours of footage before they found an image of this thing.

What's even scarier about giant squids is that they are very rare. The ocean is a deep and dark place with plenty of room for giants to thrive without ever being found. This is one of the few creatures that do a great job at it. 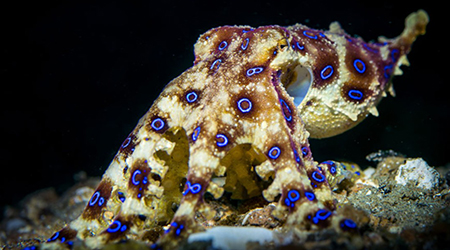 While the shy blue-ringed octopus might seem cute to some, this little bottom-dweller is one of the ocean's deadliest species.

This species only lives for about two years, though in those two years, it becomes an extremely dangerous ocean animal that you would never want to encounter.

It's easy to identify this little octopus thanks to the glowing blue rings on its body. Luckily, unless you're swimming within tidal regions from Japan to Australia, you don't have to worry about these. But if you do find yourself in those local tide pools and coral reefs, don't provoke these little guys.

Blue-ringed octopi hold two types of venom in their saliva, one of which they use as a defense mechanism and the other of which they use to kill their prey, which primarily consists of small crustaceans. Before they consume their prey, they will wait until the venom has spread throughout their entire bodies. It's slow death with one of the shiny octopi.

What's even scarier is that the venom in one of these little guys is poisonous enough to kill 26 full-grown adults in as little as five minutes. Symptoms of a bite include difficulty breathing, difficulty swallowing, difficulty speaking, visual disturbances, nausea, and the possibility of death.

To learn more about the blue ringed octopus, head over to our "Are Octopus Dangerous" article.

The great white shark is an animal that needs no introduction. If Jaws didn't scare you enough as a child, then this picture from Time magazine might just reinstate that fear.

While great whites utilize around 20,000 teeth throughout the course of their lives, what's even more shocking is that those teeth are not stationary. When opening their mouths to take a bite out of their next tasty meal, their teeth rotate outward and are then retracted back in when they close their mouths. Get more facts about sharks here. 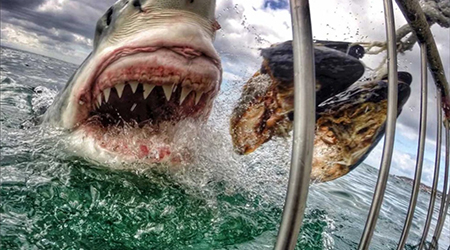 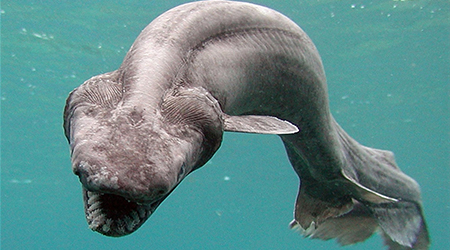 The frilled shark might be one of the strangest-looking prehistoric animals in the sea. These active predators live in the open ocean, though they spend most of their time in the deep and dark waters that lie far beneath the surface. This Mariana Trench animal gets its name from the frilly appearance of the slits on their gills.

It is very rare to find one of these sharks in the wild, as they spend most of their time swimming in the dark.

As a result, we know very little about their ecology. While they certainly might not be dangerous for humans to encounter (a lot less dangerous than the feared goblin shark), we simply wouldn't want to find ourselves swimming in the dark with one of these spooky sharks.

These massive crustaceans can grow anywhere between 7.5 and 14.2 inches, and spend most of their time lurking around the ocean floor. 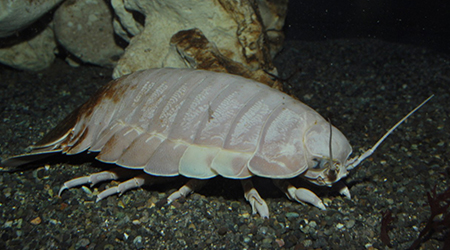 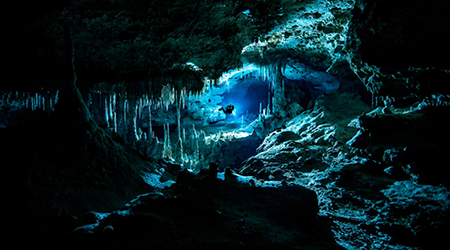 Looking into underwater sea caves all at once inspires fear and a childlike sense of wonder. Maybe it's from watching The Goonies too many times as a child.

Add the mystery of the open ocean into the mix and the urge to explore allows us to overcome the overwhelming fear of what could lie beneath.

These ocean caves were formed over hundreds of millions thanks to waves and erosion.

There are many easily accessible caves, though others are only open to trained divers who have the experience to get in and out safely.

While many find excitement in exploring places that don't even have enough light to see your hand in front of you, others find it quite terrifying. It's surprisingly easy to get turned around and lost in hundreds of feet of dark water.

If you're looking to swim in some of the most magnificent yet terrifying parts of the ocean, we recommend checking out a few of the world's most unique sea caves, including:

The sight of a bronze, algae-covered Jesus statue sitting in the ocean deep is a scary kind of sight for many. The statue, known as the Christ of The Abyss Statue, can be found off of Key Largo in the Florida Keys.

The original statue was placed there back in 1954 on the exact spot where Italian scuba diver, Dario Gonzatti, died. He was the very first Italian person to go diving with scuba gear. 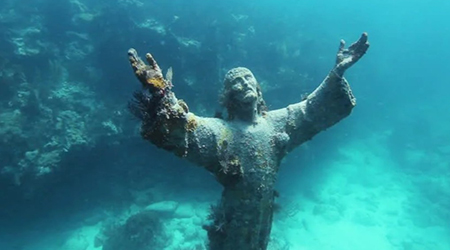 As you can imagine, this is now one of the most popular places in the ocean to go scuba diving.

The statue depicts Jesus in a peace-offering pose with his head and hands rising towards the surface of the water. This statue is accessible for most people, as it lies only 11 feet below the ocean surface. In total, the statue weighs around 400 pounds. However, it is also attached to a massive concrete base, which adds around 20,000 pounds.

Looks like this is one state we will likely never get to shore. 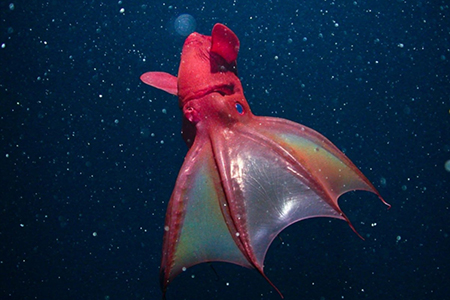 While this unique squid does not drink blood, it gets its name from the dark skin connecting its arms, which resembles a cape.

This is certainly a creature we wouldn't want to run into in the ocean!

As one of the deepest places in the world, the Mariana Trench is one place in the ocean that will have you scared straight.

At 36,201 feet below the waves, it is completely uninhabitable by any person and is home to some of the most terrifying creatures on the planet, such as the next runner up on our list, the Angler Fish.

Read our article titled "How Deep Is The Mariana Trench" to learn more! 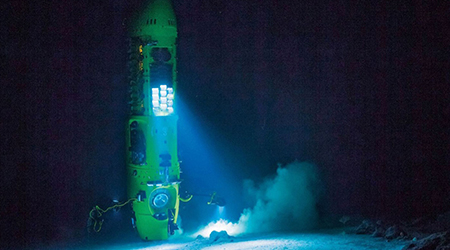 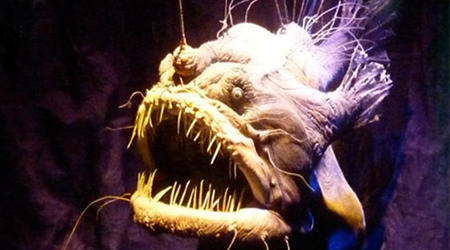 If the look of this fish doesn't scare you enough, the fact that it lives in one of the most deprived places in the world should make you scared. Its living environment is completely void of light, and atmospheric pressure is so high that it would literally crush any human who tried to swim down there.

Reaching only about 7 inches in length, the angler fish has developed a strange lure on its head acting as a light and helping it literally lure in other fish as prey.

You might remember this fish from Finding Nemo, and Pixar did an excellent job at recreating it in all its terror. The above picture captures the ferocity of this creature with its ultra-sharp teeth and lure poking out above its head.

At a depth of 202 meters, it is the second-deepest sea hole in the world, just second to Dragon Hole in the South China Sea. And at 202 meters, the blue hole is just 12 meters short of the deepest free dive record.

It is one of the most popular sites in the world for free diving, scuba diving, and snorkeling. 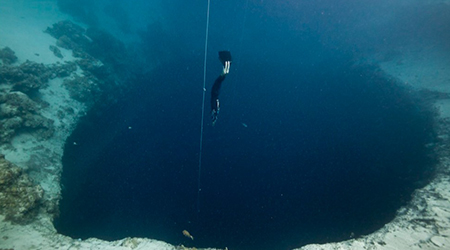