Though swordfish and marlin live in similar habitats and have strikingly similar diets, when you look at them closely, it's obvious that they two very distinct species.

Today, we are going to explore the differences between swordfish and marlin.

Difference Between Marlin And Swordfish

It's impossible to talk about these two fish without first discussing the things that make them alike. Both of these fish are part of the same billfish family, which is one of the most advanced families of fish in the ocean.

These highly migratory creatures will spend a good portion of their lives swimming in different parts of the ocean. In fact, scientists have tracked both marlin and swordfish as they moved across the Atlantic Ocean.

Both of these creatures also have advanced swim bladders that they use to go from shallow waters to deep waters really quickly without having to use a ton of energy. During a single day, swordfish can swim to depths of around 1,500 feet.

Swordfish, otherwise known as broadbills, are the only members of the Xiphiidae family. While they may be closely related to their marlin cousins, they are not the same animals by any means.

The swordfish gets its name from its bill shape, which many say looks similar to a sword.

The marlin is from the Istiophoridae family, a family that is home to around ten species of fish. 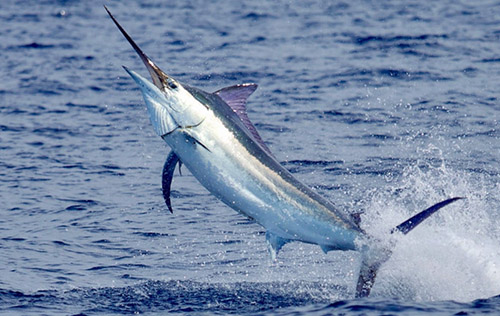 While marlins are very closely-related to swordfish and do look similar, they are much faster creatures. Not only is the black marlin the #1 fastest fish in the ocean, it is also one of the biggest fish ever caught.

FUN FACT - A black marlin can reach up to 82mph in the water, making them the fastest animal on earth.

Similar to marlins, swordfish have very long, spear-like bills that they use for hunting their prey. Sport fishermen see these fish as serious prizes.

However, different from marlins, swordfish have longer, more-rounded bodies. When swordfish are young, they have teeth and scales. However, by the time they reach adulthood, they lose all of them.

One easy way to differentiate swordfish and marlin is by their dorsal fins. Swordfish dorsal fins are very similar to shark dorsal fins, looking more like a crest than a marlin's dorsal fin.

Swordfish also have unique pectoral fins that extend below their body.

With longer bodies and sharp snouts, often referred to as "bills," marlins have a unique look. Similar to swordfish, marlins use their bills to slash at their prey in hopes of stunning it.

Its profile is striking with a torpedo shape and a stiff dorsal fin that runs along the length of its back. While there are many species of marlin, including the black marlin, the white marlin, and the Atlantic blue marlin, many of them share the same features.

Compared to swordfish, marlin have pectoral fins that are very small. It can be difficult to see them at all if you're not looking from the right angle. These small, rigid pectoral fins are one of the reasons they are able to move with such great speed through the water column, as well as what landed them a spot on our list of the fastest sea animals. 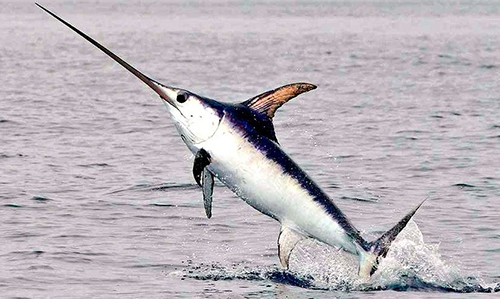 Swordfish are very migratory animals in that they travel throughout the ocean for most of their lives. You can often find these animals around 1,800 feet beneath the surface of the water, though many have been found as far down as 7,300 feet.

Swordfish can survive in such cold, dark depths due to a unique organ that surrounds the muscles of their eyes, heating their eyes and brain, and allowing them to see where other creatures cannot.

In addition, swordfish love to breach the water, which is when humans can get a good look at them.

Marlin are found throughout the Atlantic, Pacific, and Indian Oceans. However, researchers also say that they can be found in tropical waters around the world. These animals live anywhere from 20 to 30 years and are not as migratory as their swordfish cousins.

Swordfish eat a wide variety of prey, including squid and fish. With their long, sword-like bills, they slash at their prey and stun it. However, though swordfish cartoons may have us believe differently, they don't actually stab their prey with the end of their bills as a swordsman would.

The diet of a marlin includes smaller fish and squid, very similar to swordfish. Some of the small fish that they enjoy include flying fish, mackerel, and tunas. Some have even been known to hunt for dolphins.

While some can grow to around 14 feet long, most swordfish ever only reach around ten feet. However, many of them grow to weigh more than 1,000 pounds, with some reaching up to 1,400 pounds.

When it comes to Marlin, the largest species can grow to around 16 feet in length, weighing around 1,400 pounds. Marlin tend to be a bit bigger than swordfish, which is why marlin fishing is also a popular sport.

FUN FACT - The biggest marlin ever caught weighed 1,560 lbs and took an hour and 45 minutes to reel in. 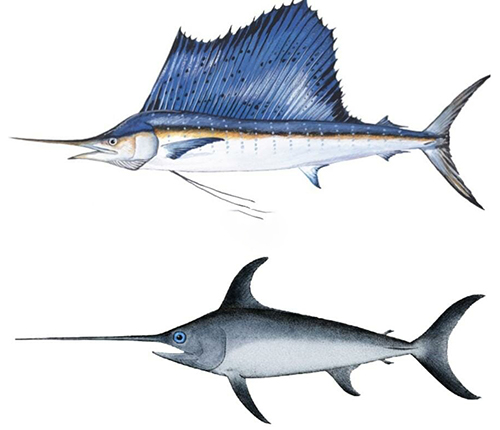 When comparing marlin flesh and swordfish flesh, marlin is a bit heavier with a pink hue. Marlin is a very fatty fish, just like tuna, making it dense. It also has a very strong flavor.

Marlin has a much milder flavor compared to swordfish.

One of the most popular swordfish recipes is swordfish steaks. You can filet a swordfish into steaks before throwing it on the grill to get the flesh nice and firm.

The beauty of the density of swordfish is that you can cook it in many more ways than other delicate fish. Many people will grill up swordfish and put its meat on skewers.

Some people use larger chunks of swordfish to put in fish soup. Of course, if you don't want to cook or pan-fry your swordfish, you can always eat it sashimi style.

Marlin, on the other hand, is far better when you consume it sashimi-style. To do so, it must be on its own, without rice, raw and uncooked. Cut your marlin into smaller slices and add some sesame seed oil, lime juice, and fresh coriander. This is one of the most popular Asian appetizers.

Marlin is also popular with rice as sushi. Of course, if raw fish isn't your thing, you can sear it quickly on both sides and serve it very similar to how you would serve a tuna steak.

Where To Find Them

You can find marlin and swordfish in deep waters.

If you're looking to catch one of these animals, we recommend looking close to the continental shelf drop-off. This is the place where shallow waters surrounding land drop off into the open ocean.

These fish love this habitat, as it acts as a well for nutrient-rich water. Beyond swordfish and marlin, you'll find a ton of other billfish. You can also find swordfish and marlin close to shore around seafloor features and beneath underwater seamounts, as they're able to attract schooling baitfish in these areas.