Biggest Turtle In The World

Sea Turtles have been roaming the ocean for more than 110 million years. As one of the oldest creatures on Earth, they've evolved into a range of diverse species. Some of these magnificent sea reptiles can grow up to over 2,000 pounds!

Dive into the deep blue with us as we explore the biggest sea turtle in the world.

What Is The Biggest Turtle In The World?

So, how big is the biggest turtle in the world?

Unfortunately, the largest turtle in the world is not alive any longer, though you can find her on display at the National Museum Cardiff. Gwynedd was her name.

She was a giant leatherback that washed ashore on Harlech Beach back in September of 1988. She had sadly drowned after getting caught in fishing lines.

Scientists say that she was around 100 years old at the time of her death. 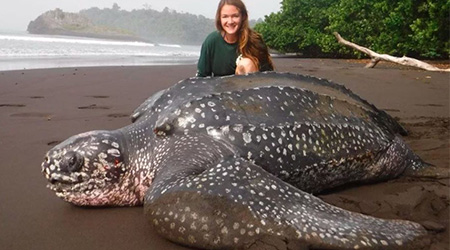 She did get her claim to fame, however, when she was listed as the heaviest turtle ever recorded. Gwynedd weighed 2,016 pounds and was almost 9ft long.

If you visit the world's largest leatherback turtle at the National Museum Cardiff, you'll find that the skeleton has been removed from Gwynedd's body to be put on display as its own exhibit.

Over the years, Gwynedd's body has gone through a number of necessary renovations, moving into different sections of the museum, though she can still be enjoyed in the gallery on open display.

There surely might be another turtle out there that is even larger, though that turtle has yet to be discovered. Because female turtles are the only ones to lay eggs, they are the only ones that leave the ocean. It is pretty rare for humans to get a glimpse of male leatherback turtles.

The largest seat turtle alive today is the leatherback sea turtle - a massive specimen, many of which grow up to 6 feet long and weigh between 550 and 2,000 pounds.

Leatherbacks have been listed by the U.S. federal government as endangered. The main forms of danger to this ancient species include marine pollution and commercial fishing lines.

Where in the world do these massive leatherback sea turtles reside?

They can be found throughout the northern Pacific Ocean, and many swim as far north as Canada. However, the majority of the leatherback turtle population tends to nest further south in the tropics. If you want to catch a glimpse of the largest sea turtle in existence, your best bet is to head down to Puerto Rico, the U.S. Virgin Islands, or southeast Florida.

Beyond our reaches here in the Americas, leatherback sea turtles are found in oceans across the globe. They have the largest habitat range of any sea turtle species. These giant turtles also live throughout tropical and sub-tropical oceans. Some of them even venture into the Arctic Circle - far beyond what us humans would consider a hospitable environment.

Most sea turtle species don't inhabit such frigid environments, but the leatherback does!

In the Atlantic Ocean, leatherbacks can be found from the Cape of Good Hope all the way to the North Sea, enjoying feeding spots near Newfoundland and the Gulf of Saint Lawrence outside of Quebec.

Some of the most popular Atlantic Ocean nesting sites include:

FUN FACT: Each year, next to 30,000 leatherback turtles make their way to the beach in Gabon to nest, making it the most popular leatherback sea turtle nesting beach on Earth.

These turtles made history throughout the South China Sea. In the 1950's, Rantau Abang beach in Malaysia was one of their largest nesting grounds. More than 10,000 leatherback sea turtles would come here each year for the nesting season. However, due to overfishing, few adult leatherbacks are found in this area now. 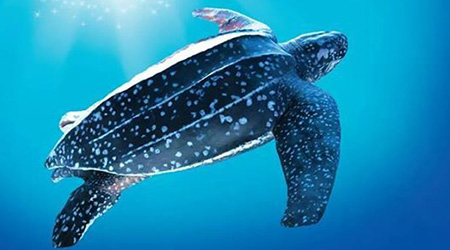 As you can probably guess, sea turtles have distinctive physical characteristics compared to those found living on land, in lakes and in rivers.

One of the most notable characteristic differences between the leatherback sea turtle and other species of sea turtles living in the ocean is the lack of a shell.

Rather than a hard shell like a regular turtle shell, the leatherback population has thick leather skin with spiky scales called osteoderm.

The strange thing about osteoderm is that it's primarily found in crocodiles and lizards. These scales don't come without function. For starters, they provide a tough armor for protection against sea predators.

They also help out with heat exchange, as sea turtles have the ability to rapidly raise and lower their body heat.

You will find seven distinct ridges sitting along their carapace, moving from the back up to the neck. While we're not quite sure of the functionality of these ridges, they do make it easy to differentiate them from other sea turtle species.

As for color, their upper portions are dark grey, and some get so dark that they turn black. The unique thing about their coloration is that they are dotted with white spots, many of which are concentrated near the face.

The underside of the turtle is lighter in color, ultra common among sea creatures. If you look at most fish from below, you can see that their bellies are often white or much lighter than the rest of their body.

This color phenomenon is known as countershading. Not only does it act as camouflage against predators, but the increased melanin on the top of their body helps absorb more heat from the sun.

Leatherbacks are similar to their cousins in that they have flat forelimbs, excellently designed for swimming at high speeds. Leatherbacks have the largest fins of all sea turtles. In fact, many front flippers on adult can reach up to ten feet long!

Leatherback turtles have hydrodynamic bodies that help them swim much faster than other sea turtle species. With torpedo-like bodies, they encounter less water resistance.

As with most other turtles, they do not have teeth. Instead, their mouths are sharp with cutting edges for eating animals and plants.

What Do Leatherback Turtles Eat?

What's interesting about the leatherback turtles' diet is that it is not very assorted. For the most part, they like to eat jellyfish. Every now and then, they might enjoy some fish or a few water plant species, though it isn't very often.

The leatherback sea turtle sticks to jellyfish, as these creatures are filled with tons of nutrients and are some of the easiest specimens to catch. Plus, jellyfish can be found all throughout the ocean, which is excellent for this animal that is almost constantly migrating.

Compared to other sea turtle species, Leatherbacks have a unique breeding process.

Their mating journey starts thousands of miles away from their breeding sites.

After traveling to the right breeding site, they will select a partner through a physical courtship process.

In leatherback turtle society, it's pretty common for multiple males to fight over a single female turtle. 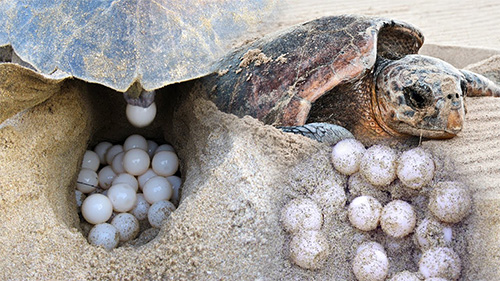 With such an aggressive courtship process, it is common to see bite marks on adult turtles in the aftermath.

One other characteristic that sets their breeding process apart from other types of turtles is the frequency in which females will mate with numerous male turtles. Scientists explain this as a way for these turtles to provide genetic diversity to their offspring for survival.

After the mating process is through, females make their way up onto the beach outside of the water, where they lay their eggs. Females dig holes in the sand that are around three feet deep to lay eggs inside. Each female turtle lays around 70 eggs in a single sitting! And they do this every four to five years.

Once their eggs are in the ground, they go back into the water to feed and strengthen up for around ten days.

FUN FACT: Female turtles always return to the beach that they were born on to lay their eggs.

The World's Largest Turtle From Birth

Now, of course, the world's largest sea turtle doesn't start out so big.

Once a baby turtle breaks free from its shell and begins moving toward the ocean, it must be very careful to avoid danger.

Many bird species spend time prowling around turtle nests, waiting for a chance to eat the unhatched eggs. Because sea turtles are unable to protect their nests, around 10% to 20% of the eggs are consumed.

Other turtles present a danger for eggs as well! It's difficult for turtles to tell if another turtle has already laid eggs in a specific spot. Because of this, they start digging to make a nest for their own eggs, tossing out the previously buried eggs in the process.

The one advantage that baby turtles have is that nest sites are often protected from humans, so human activity isn't often as damaging as you'd think.

Eggs need to incubate for around 60 days before babies start climbing up out of the sand and to the ocean. It is safest to do this around nighttime, as less birds are around, though there's no way for them to know, and many make the trek during the most dangerous hours of the day.

Only 25% of babies that make it to the ocean will survive the first couple of days in the ocean. Only about 8% make it through their first year, as finding enough food and straying away from predators can be quite difficult.

FUN FACT: Once they make it into the ocean for the very first time, most leatherback males will never spend time on land again.

Today, there are only around 100,000 leatherback sea turtles in existence. While many nesting beaches are protected from humans, activities like egg harvesting, trading, boating, and commercial fishing have dwindled this big turtle population down from what it once was.

Ocean pollution and climate change have had significant impacts as well. Plastic bags are a major issue, as they look a lot like jellyfish. Around 30% of the sea turtle population has ingested a plastic bag at least once.

If we do our best to conserve our oceans, we can make sure that there will always be a happy and healthy home for the largest turtles on Earth!