As some of the most majestic creatures in the ocean, whale sharks have become insanely popular to go diving with.

Today, we want to take you through a few of the best places in the world to go whale shark diving so you can experience swimming with whale sharks and enjoying the presence of these gentle giants.

Let's dive in and check out where to see whale sharks!

Ningaloo Reef, a newly declared Unesco World Heritage Site, stretches for 160 miles along the Australian west coast and is one of the best places to swim with whale sharks.

Plus, you can go scuba diving with an array of other ocean wildlife, including corals, mollusks, and a variety of fish.

When winter rolls around, many non-native animals migrate to the area, including humpback whales, manta rays, and dolphins, so you might get a chance to see them too! 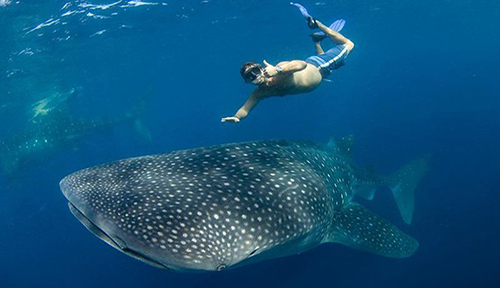 PRO TIP - One of the best times to go whale shark swimming in Australia is during the fall months, from around March to June.

Whale sharks can be found all over the Maldives, which is arguably one of the most beautiful places on Earth. In The Maldives, you'll find turquoise seas and white coral sand that stretches along the water. Beneath the surface of the water is an absolute paradise for marine life, including everything from whale sharks to dolphins to manta rays to sea turtles.

Note that the Maldives is divided into 1,192 coral islands and 26 atolls. Many of these small islands can be explored on foot in just a few minutes.

One of the best places to go on whale shark tours is near the South Ari Toll. You'll often see smaller whale sharks come here during warmer parts of the year to feed. With such warm waters, there is plenty of food here for these gentle giants to enjoy without them having to worry about any predators.

In January of 2022, researchers studied 571 different whale sharks in the area.

Whale shark tourism is only beginning to emerge in this secret East African country that lies between Somalia, Ethiopia, and Eritrea.

Beyond the gorgeous smattering of French, Arabic, and African influence, you'll find some of the most beautiful underwater habitats on Earth.

With a number of earthquakes happening throughout the year and constantly shifting plates, every dive becomes unique. The reefs here in Djibouti are some of the planet's healthiest reefs. You'll get to enjoy more than 200 coral species each time you dive. Plus, when the currents of the Indian Ocean come in, you get an entire world of marine life, including colorful fish, whales, and whale sharks.

Juvenile whale sharks can be found all over the Gulf of Tadjoura, some of which are as small as two meters long.

Mafia Island in Tanzania is an island in the Indian Ocean. Surrounded by tropical waters, it is one of the best places to experience whale shark encounters. Beyond that, this island is one of the few places on this list that is still relatively secret. It's a great attraction for those who don't like to be part of a tourist frenzy.

Make sure to sign up for a whale shark excursion through one of the local tour companies so you can enjoy spending time with these gentle giants. One of the best times to go is between October and March!

Cancun is not only for tequila shots and spring breakers.

In fact, you'll find some of the most beautiful waters in Cancun, as it sits near the Caribbean Sea.

With wondrous hospitality and gorgeous landscape, Cancun is an excellent place to go on snorkeling tours and see whale sharks.

Most whale shark sightings take place near Isla Holbox, though many say they've seen them near Isla Mujeres and Contoy over the past few years. If you are in the area any time between June and September, we recommend heading over to the Yucatan Peninsula.

PRO TIP - Because this area is heavily-regulated, going on a whale shark trip outside of June to September is illegal.

Beyond some of the best scuba diving on the west coast, Baja California offers several fantastic opportunities to find whale sharks. The difference between here and Cancun is that diving with whale sharks is not as regulated.

We recommend going to the Sea of Cortez during whale shark season (early spring months), as it is one of the best places to see the biggest fish in the world in action!

Beyond that, you can also hit Cabo San Lucas, La Paz (two hours from Mexico City), and Cabo Pulmo National Park. Also, keep your eye on Bahia de Los Angeles. While it's still fairly new, this scuba diving destination will certainly be booming in the next few years.

The early spring months are the best for catching whale sharks in this region. However, you can attempt a dive to see whale sharks any time between November and May, with a pretty decent chance. 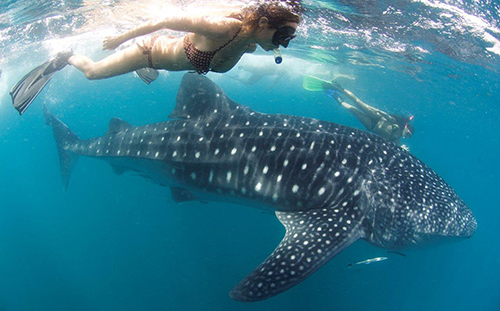 It wasn't until 1998 that people actually 'discovered' whale sharks swimming near a fishing village in Donsol Bay, which is a very small town on Luzon Island. After that, this beautiful little village became one of the country's prime tourist destinations.

While whale shark sightings are a bit less frequent than they used to be, many people say it is one of the most ethical places to see whale sharks. Some places, such as Oslob, Cebu, have people that feed the whale sharks to get them to appear to tourists.

If you're in the Philippines, we also recommend checking out Palawan, Puerto Princesa, Southern Leyte, Sogod Bay, and Tubbataha Reef National Park.

The peak season to see whale sharks in the Philippines is between February and April.

When millions of fish appear in the Gladden Spit between March and June, the opportunity for food draws a large number of whale sharks. The best time to go swim with whale sharks here is between April and May. People say that two days after a full moon is prime.

Beyond taking a swim with whale sharks, you can enjoy the sandy streets of Placencia and the many cabana-style accommodations that line the streets.

Cenderawasih Bay is a gem of Indonesia, offering pristine reefs, warm water, and unique WWII shipwrecks. It's a great place to scuba dive, as a good portion of its completely unexplored.

What's unique about the whale sharks here is their feeding patterns.

Fishermen often find them sucking at the bottoms of large fishnets to extract fish.

While these graceful giants can be found in the area year-round, the peak season is between August and October.

If you're looking for a place that is still relatively secret to the scuba and snorkel community, then Tofo Beach is the perfect location. Just a short trip from South Africa, you'll find some of the most uncontaminated natural spots to dive with whale sharks year-round.

Beyond diving with the largest fish in the world, if you end up coming during the winter, you can also swim, snorkel, and dive with dolphins, rays, turtles and other ocean animals.

Isla de Utila is found just off the coast of Honduras and is the smallest of the three Bay Islands.

Ask anyone from the area, and they'll tell you that Utila is the whale shark capital of the Caribbean.

With so many whale sharks, it's easy to see why. We recommend heading over to the north side of the island if you're looking for an encounter with some whale sharks, as there are plenty of shallow reefs that extend into the deeper ocean.

One of the benefits of swimming with whale sharks here is that the area is home to the Utila Shark and Oceanic Research Center. This ocean conservation center and whale shark facility created laws for the island, making it a protected area for whale sharks.

Costa Rica literally means 'Rich Coast' in Spanish. You can truly find something for everyone in this gorgeous region. The Caribbean coastline is one of the best places to go for a dive year-round. Plus, when you're done, you can sunbathe on the shore with a drink in hand!

Of course, if you go to the Pacific end of the country, you can dive around several breathtaking pelagics. Volcanic topography can be found all over Guanacaste. Plus, there are many unique offshore islands to explore, including Bat Islands and Catalina.

While you can dive or snorkel here throughout the year, as there is rarely poor weather, we recommend going between June and November to see the whale sharks. During this 'wet' season, plankton blooms attract whale sharks from far and wide.