There are scientists in the oceanic research community that refer to sharks as "living fossils," as these sea predators have roamed the earth for more than 400 million years.

So, when people ask the question, "Do sharks have bones?" they typically think the answer will be pretty obvious.

Of course, a creature with this much power and ferocity must have an ultra-strong skeletal structure, right?

You might just be surprised to find out that isn't the case at all! Come dive in with us as we learn more!

How Many Bones Do Sharks Have In Their Bodies?

Sharks don't have bones in their bodies at all!

Unlike our human skeletons that we are so familiar with, sharks don't have a single bone in their body. Their skeletal structures are probably not what you imagined at all!

Why don't sharks have bones?

Well, luckily, they have something equally as strong that holds their structure together!

What Do Sharks Have Instead Of Bones?

While many animals have skeleton structures made from bones that shape their bodies and give them strength, sharks are different.

This species comes from the Chondrichthyes class, meaning they are cartilaginous fish, instead of the Osteichthyes class of bony fish. Beyond that, sharks are also from the Elasmobranchii class, which includes sawfish, skates, and rays.

So, what is cartilage?

Cartilage is a strong and flexible tissue that pretty much has the same job as a bone skeleton, giving body shape and structure while adding a protective barrier for their internal organs.

The human skeleton is held together by different forms of cartilage as well!

To give them strength and flexibility where they need it, the shark's skeleton is made up of different types of cartilage in different places. Some parts of a shark's body require more flexibility, while others require more protection.

For example, a shark's head is made from calcified cartilage to protect its brain. Their stocky skills come with a braincase, which protects the brain, and eye sockets, very similar to a human's skull.

You can also find calcified cartilage in the shark's jaw bone. However, a shark's snout is made with softer cartilage.

Cartilaginous skeletons provide both strength and flexibility, which is why sharks benefit from them so much.

How Does Cartilage Hold Up?

Cartilage may not be as strong as bone on its own, which is why many people are so curious as to how it protects one of the strongest creatures in the ocean.

The answer here is calcium salts.

When sharks age, their cartilage hardens thanks to calcium salt deposits that continuously build up. When cartilage is calcified, it almost appears to have the same density and toughness as bone.

What Are Shark Teeth Made Out Of? 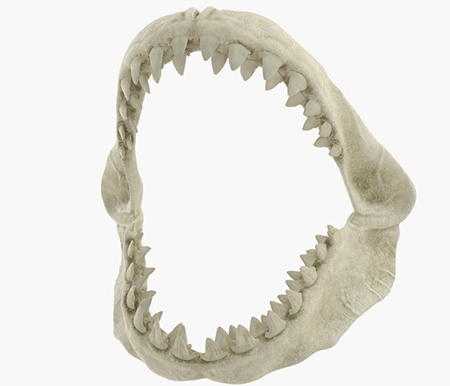 Shark teeth aren't made of bone either.

Just like humans, shark teeth are made out of dentin, which is a type of calcified tissue.

Dentin fossilizes really well because it is much denser and stronger than bone.

Are Sharks Vertebrates Or Invertebrates?

Sharks are a classified vertebrate species, meaning they have backbones.

How do sharks have backbones if they don't have bones?

The thing is, animals don't need to have backbones for them to classify as vertebrates.

This is thanks to the fact that this column is made up of calcified cartilage, just like the shark's head and jawbones. Calcified cartilage is extremely tough, providing all the protection a shark would need.

Benefits of a Cartilaginous Skeleton

There are several advantages to having a shark skeleton that isn't made of bones. In fact, one of the reasons sharks have become such powerful predators is because they are cartilaginous fish.

For starters, cartilage is very lightweight compared to bone, which is great considering sharks do not have a swim bladder. To retain buoyancy, sharks must rely on their big, oil-filled livers.

Essentially, the liver collects oils in the body to help it float. The more fat a shark has in its liver, the more buoyant it will be.

FUN FACT: Bottom-dwelling sharks typically have more oils in their livers, allowing them to float easily.

If sharks had regular bones in their skeleton, they'd be much heavier.

Plus, cartilage is very flexible when compared to bone, allowing sharks to swim faster and turn tighter, perfect for chasing down their prey.

Beyond that, a shark's cartilaginous skeleton allows it to flex its jaw much more. If a shark's jaw was made from bone, it would have a difficult time opening its mouth super wide to consume large prey. Because a shark's mouth can open super wide, they have a much better wind-up to exert incredible downward force when they bite.

Remember, sharks can swallow an entire sea lion in a single bite!

And, as you probably guessed, sharks have just about the greatest bite force in the ocean, which is one of the reasons they are the most feared predators. In contrast, their snouts are very soft and flexible, as they are made of softer tissue.

The good thing about this is that they can suffer serious blows to the snout without getting seriously injured. Essentially, their snouts act like the bumper on a car, giving their denser cartilage an added layer of protection.

If a shark faces a serious blow and gets injured, the healing process won't take as long as it would if it had bones. Broken bones (as you might know) can take forever to heal. Cartilage, on the other hand, heals much faster. If a shark gets injured, it won't have to spend as much time out of commission.

Lastly, cartilage doesn't have a size limit like bones. In fact, sharks almost have infinite room to grow, which is why sharks and other species of cartilaginous fish grow to unbelievable sizes.

If you've never had the chance to go to a touch tank at an aquarium, we highly recommend doing so.

Getting a chance to touch the ultra-rough skin of a shark is a unique experience, to say the least. This is because their sandpaper-like skin isn't skin like we think of it. A shark's skin is made up of dermal denticles, which are small teeth that are similar to scales.

These denticles face backward, allowing sharks to propel themselves near effortlessly through the water. Petting a shark's skin going backward, you might think it was quite soft. However, moving in the opposite direction, the surface of the skin would feel quite rough.

Why Don't Sharks Have Bones?

We're not entirely sure why sharks don't have bones in their skeletons. however, scientists believe that there are ancient shark ancestors that were around millions of years ago who had bones in their bodies.

A fair portion of the scientific community believes sharks evolved out of their bony skeletons hundreds of millions of years ago. It is believed that sharks with cartilage skeletons were better able to survive in their habitats, which resulted in them becoming cartilage fish later down the line.

Scientists also believe that the shark's cartilaginous evolution played a big role in it becoming one of the top predators in the ocean. If sharks didn't have flexible, ultra-lightweight skeletons, they would never have been able to avoid predators and catch prey as well as they do.

Other Kinds Of Cartilaginous Fish

As we said before, sharks belong to a family of fish with cartilaginous skeletons. Some of these fish include sawfish, manta rays, and stingrays.

Chimeras also have cartilaginous tissues as skeletons and are closely related to rays, sawfish, and sharks. There are a few different species of chimeras, including rabbitfish, spookfish, and ghost sharks.

While shrimp, octopus, and jellyfish do not have regular bones, they are not vertebrates.

Keep the fun going by visiting our recent articles!