Crab is considered one of the tastiest ocean species. However, the first thing that comes to most of our minds is the generic orange crab often depicted in cartoons and movies.

While there are certainly plenty of standard-looking orange crabs out there, thousands of other species exist, ranging in color, size, and features.

Come dive in with us as we take a closer look at the different types of crabs that inhabit the planet.

You may have heard of this little crab species before, as children often keep them as pets thanks to their small size and the fact that they are fun to play with. However, what you might not know is that there are 1,100 species of hermit crabs, which span over seven crab families. 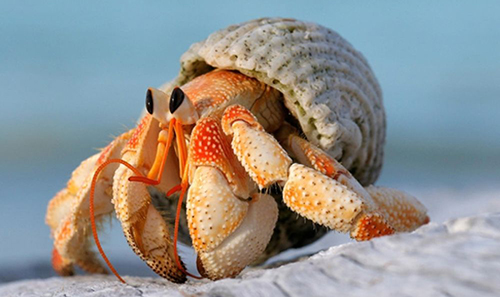 Hermit crabs have a uniquely wide lifespan. Some hermit crabs will only live a few months, while others can easily live for up to thirty years. Another distinctive quality about hermit crabs is that they are exceptionally social animals. You'll often find hermit crabs living in large colonies. 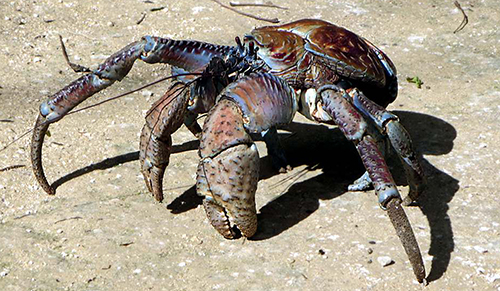 In contrast to the small hermit crab species is the magnificently large coconut crab.

However, it often takes them around 60 years to reach their full size.

Coconut crabs get their name because of their deep affection for coconuts. You can often find these massive crabs climbing coconut trees for a little snack.

Beyond the coconut, coconut crabs enjoy fruits, nuts, seeds, and meat. However, unlike many other crabs, they cannot be in the water for prolonged periods, as they could drown! Coconut crabs inhabit lands surrounding the Pacific and Indian oceans. Because the coconut crab lives in such remote places, however, its only predators are humans and other coconut crabs. 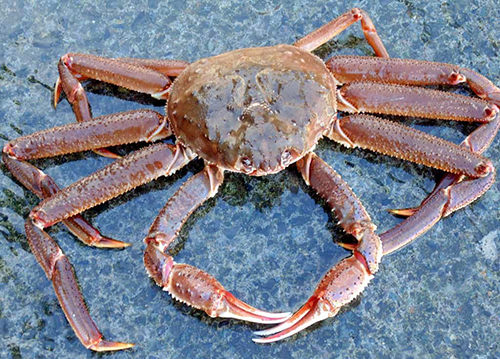 You can find snow crabs in the waters of Alaska and the North Atlantic ocean.

Snow crabs are often dark brown in color and are often caught for their tasty meat, which is found in their legs and claws.

Unlike other crabs, the claws and legs of the snow crab are easy to break open for extracting the meat.

Blue crabs get their name thanks to their blue-colored shells. These large-sized crabs can be found all over the world in places like the North American East Coast, Japan, Europe, and the Gulf of Mexico.

Blue crabs are swimming crabs. They use feet, which look like double paddles, to help them swim. Though some can grow bigger, the average blue crab will grow between 3.5 and 5.5 inches. 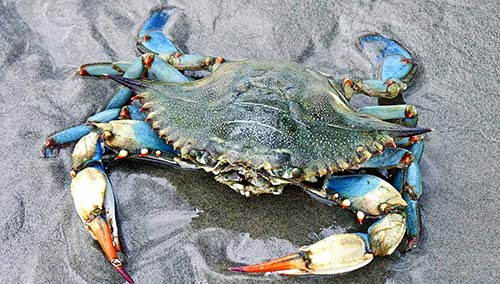 People often eat blue crabs, though they don't remain blue once cooked. The blue crab will turn a unique, deep-red color during the cooking process. The taste of blue crab is often described as "salty and sweet."

Similar to the snow crab, you can find a fair portion of its meat in its claws and legs.

One distinguishing feature of blue crabs is their sides, which protrude from their carapace, unlike the round carapace found on most crabs 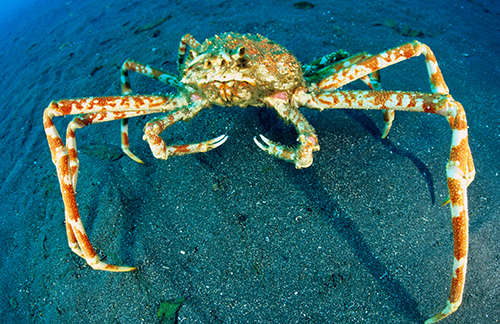 These crabs can easily weigh around 40 pounds, making them some of the largest crabs in the ocean.

Of course, the Japanese aren't afraid of this massive Japanese spider crab species. Instead, they harvest them for their sweet, tasty meat.

FUN FACT: The Japanese spider crab rightfully earned the #1 position in our Biggest Crab In The World article!

Horseshoe crabs get their name thanks to the clear fact that they look like horseshoes.

And these little horseshoe crabs have seen a lot. They are one of the oldest crabs in existence and have been around for more than 500 million years. You can find horseshoe crabs throughout the Atlantic Ocean, inhabiting the coasts of India, Nova Scotia, Yucatan, and the Philippines.

While their crab meat is edible and incredibly tasty, people don't often like them because of their lack of flesh.

It's easy to come across these edible crabs when talking along Florida's sandy beaches. While their spikey tails might look dangerous, they are completely harmless. However, that's not to say you should go around picking up horseshoe crabs, as you could hurt them!

FUN FACT - Horseshoe crabs have ten eyes, which is why they are relatively close to spiders, ticks, and scorpions.

You can tell a peekytoe crab from other crabs thanks to its brown shell color with unique purple spots.

Compared to its other rock crab cousins, the peekytoe crab is relatively small, with a shell that covers about 5.25 inches in diameter. Similar to the Florida stone crab, it has relatively small claws too.

FUN FACT - For many years, fishermen considered the peekytoe crab a "throwaway crab." However, when its name was changed from the Maine crab to the peekytoe, its popularity skyrocketed, becoming ultra-popular in the restaurant industry. You can find this edible crab in everything from crab rolls to salads!

Dungeness crabs are relatively large crabs that can weigh anywhere from 1.5 to 4 pounds.

You can tell a Dungeness crab from other crabs thanks to its purple-brown coloration.

Dungeness crabs are found throughout the waters between Alaska and Baja, Mexico.

However, they got their name from a former town in Washington.

Dungeness crabs are very popular in cuisine, which is why there are so many laws surrounding their harvest. 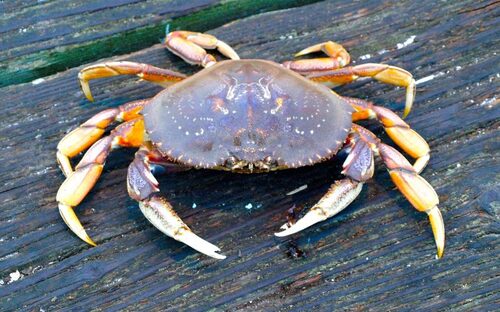 For example, fishermen can only harvest male Dungeness crabs that are at least 6.25 inches long. You can catch a Dungeness crab using nets, hooks/lines, and baited pots, though some people use their hands! 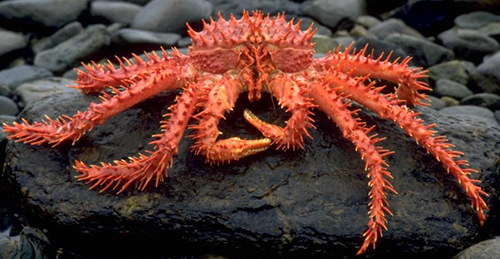 King crabs go by many names, including the Alaskan king crab, the Japanese crab, and the Russian Crab.

These king crabs can easily grow up to 25 pounds and ten feet long.

King crabs have a very delightful taste and are often very big, which is why they are the most common type of edible crabs.

They are often recorded as the largest species of crabs known to man.

The red king crab is a specific species that grows to around 11" across its carapace. However, its legs can easily grow up to five feet, which is where you'll find most of the tasty meat.

Another type of Alaskan king is the blue king crab. While it doesn't quite match the size of the red king crab, it is equally impressive in the grand scheme of crab life.

Another common type of marine crab is the Florida stone crab.

This crab is native to the warmer waters on the North American east coast and Central America.

One feature that helps us distinguish the Florida stone crab from others is its large pincers, which lie at the front of its body.

Its pincers are brownish-red in color with black tips. They often span around 6.5 inches, putting them in the mid-to-large-sized category. 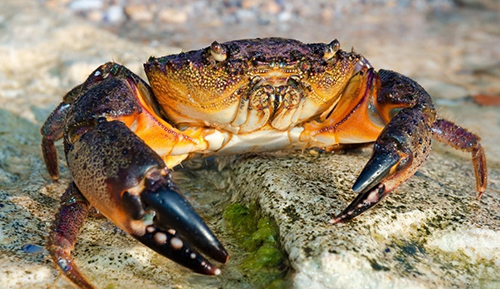 These crabs have incredibly hard claws, which is why people often use mallets to crack them open. 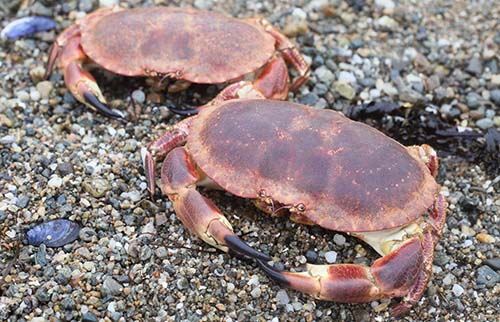 It's easy to mistake a brown crab for a Florida stone crab, as they have very similar characteristics, including reddish-brown shells, legs, and claws. Brown crabs are some of the most popular crabs in the United Kingdom.

These mid-sized crabs often grow anywhere from 6 to 9 inches, weighing between six and seven pounds. One of the reasons why people enjoy the brown crab so much is that a third of its weight is its flesh! However, the taste of a brown crab will mostly depend on its sex.

The horsehair crab is often found in Japanese cuisine. It has a brown-orange color, a bumpy texture across its shell, and spiky hairs found all over its body. You can find the horsehair crab in the northern waters of Alaska and Japan.

This edible crab houses a lot of meat in relation to its relatively small body. Many people describe the taste of a horsehair crab as delicate and sweet, while some even say they are the tastiest crabs on Earth.

Though some people refer to them as European green crabs, they most often go by their Southern European crab name.

The Southern European crab is an edible freshwater crab often found in streams and rivers throughout Greece, Italy, and the Balkans. It is green in color and quite small compared to other saltwater crabs.

The Southern European crab has been a very popular regional dish for hundreds of years, though it is now becoming an invasive species in North America.

Many people describe the taste of the Southern European crab as "rich and sweet."

Bairdi crabs are "true crabs" in that they have pincers in front of their legs. With five pairs of specialized legs, a carapace-shaped body, a short tail, and an abdominal flap, they are the most "crab-looking" crabs around.

Unfortunately, the population of bairdi crabs is at stake due to overfishing.

Luckily, stricter controls are being put in place to minimize catching and control trade.

Bairdi crabs are part of the snow crab variety and are often considered "giant snow crabs" because of how large they are compared to others. While they can be boiled like many other crabs, they are also often roasted and grilled. 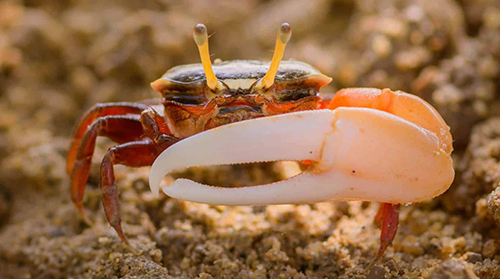 Fiddler crabs are very easy to spot thanks to their single enlarged claw, which they often use to attract mates. You can generally find these crabs in beaches, marshes, and mudflats, though red-jointed fiddlers are much better with low salinity.

On the other hand, sand fiddlers live on brackish, salty, and sandy beaches and flats. Because they can only feed on small sediments, they are not able to survive in the mud like some of their other fiddler crab

cousins. The fiddler crab will often create small and elaborate burrows that can stretch for up to two feet in length! These burrows are like homes for fiddlers, allowing them to hibernate during the winter, procreate during mating season, and sleep when they need a break from the chaos of the ocean.

Learn about other creatures of the deep in our recent articles!