So, just how many species of whales are there?

Though much of the ocean is left undiscovered, scientists now know there are more than 90 species of whales, porpoises, and dolphins in the order Cetacea. In terms of whales, there are over 40 types of whales living in the deep blue sea.

The diversity in the whale realm is what makes this family of sea dwellers so beautiful. However, before we get into it, we want to remind you that many animals may look like whales and have "whale" in their names, though they are not whales at all!

For example, the killer whale (orca) and the pilot whale are dolphin species!

Come dive in with us as we learn more about the most popular types of whales around.

Before we get started, it's important to know that there are two main types of whales, including baleen and toothed whales.

Baleen whales have baleen plates in their mouths instead of teeth. They use these baleen plates to filter feed for plankton and krill. These baleen plates are made out of keratin, which is the same substance you would find in your fingernails. Right whales, for example, have between 200 and 270 baleen plates on each side of their upper jaws.

Baleen whales are among the largest whales on Earth, which is why so many people dream of seeing one in person.

Then, there are toothed whales, also known as odontocetes. Tooth whales, such as sperm whales, use their large teeth for hunting fish and other big sea creatures. Beyond whales, some popular Odontoceti include dolphins and porpoises. Bottlenose dolphins are arguably the most popular!

There are over 70 species of toothed whales known to man.

The fin whale is the second-largest animal on Earth. In the olden days, sailors used to refer to the fin whale species as the "greyhound of the sea," thanks to its sleek body and grey coloration.

Fin whales belong to the family of baleen whales, meaning they have plates instead of teeth that they use to filter feed. They have streamlined bodies and are asymmetrical in color, with a small, white patch on their lower jaw. 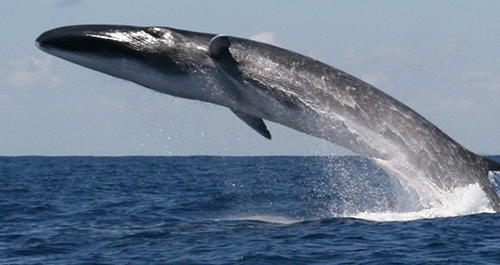 A fin whale may grow up to around 82 feet by adulthood. The easiest way to identify a fin whale is by looking for its prominent dorsal fin and tall spout. 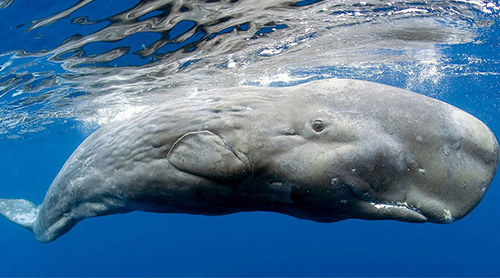 Sperm whales are the largest toothed whales, growing up to around 60 feet in length. You can tell a sperm whale apart from other whale species thanks to its wrinkled skin, stout body, and blocky head.

The sperm whale got its claim to fame with Herman Melville's famous novel, Moby Dick. While the name sperm whale may seem a bit strange, it's actually because it comes from the name "spermaceti whale," which is a liquid-like substance that can be found in the forehead or melon of a sperm whale head.

The dwarf sperm whale can be found in temperate and tropical oceans around the world, while the pygmy sperm whale is very rarely sighted in deepwater environments.

FUN FACT - The adult sperm whale has the largest brain on Earth! 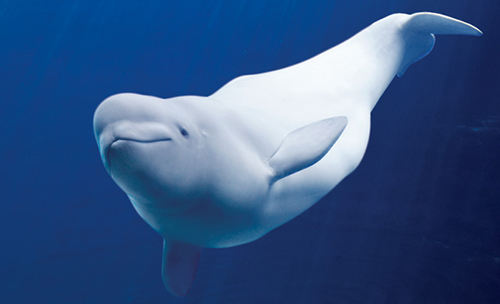 The beluga whale sometimes referred to as the "white whale," is one of the easiest whale species to identify, thanks to its white body and massive, melon-like head. The closest-living thing to a beluga whale is a narwhal.

Many refer to the beluga whale as the "sea canary" thanks to its distinct, high-pitched vocalizations that it uses to communicate and echolocate in darker waters. However, there is a reason beluga whales have such large heads too! Their melons help them communicate, acting as an acoustic amplifier to project their calls across long distances.

The blue whale is one of the most magnificent creatures to have ever existed. Adult blue whales can reach up to a whopping 95 feet and weigh more than 165 tons, making it the biggest whale in the world.

Though the blue whale is the largest animal on Earth, it exclusively feeds on some of the tiniest creatures — krill. A blue whale can easily consume up to 8,000 pounds of krill each day.

The blue whale is part of the family of baleen whales and can be found in oceans around the world. It was the most hunted whale species on Earth at one point in time, which almost drove it to extinction. Unfortunately, it is still listed as "endangered" and is one of the least-studied baleen whales. 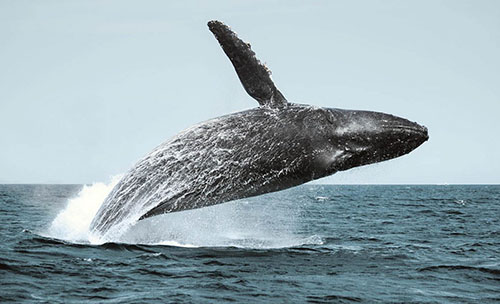 The humpback whale is another iconic whale species and one of the few whales that can be found in oceans all over the world, from the freezing polar oceans to the warm tropical seas.

The humpback whale might be best known for its incredible communication skills and its acrobatic behaviors. The male humpback whale will often produce complex vocalizations that sound like songs to attract female mates. Some of these songs can last up to 20 minutes!

Unfortunately, the North Atlantic right whale is critically endangered due to eighteenth-century whaling. Luckily, however, there are protections in place today!

This baleen whale is not to be confused with the North Pacific right whale, which lives in coastal areas surrounding Japan, western Russia, and Alaska. 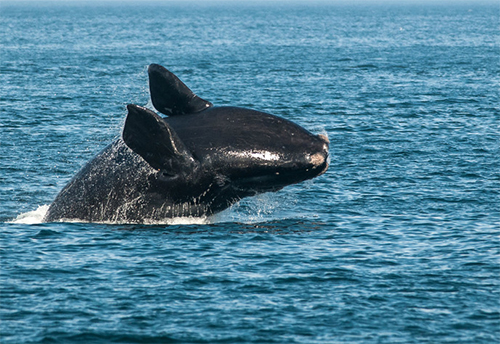 However, due to the remote environment of the North Pacific right whale, people rarely spot it 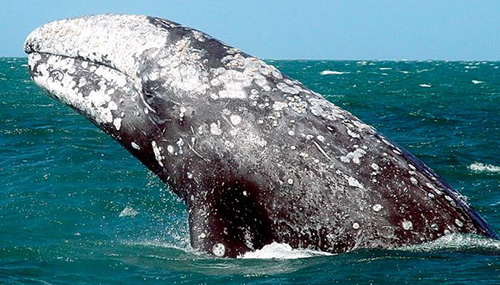 Gray whales are part of the family of baleen whales and can only be found near coastal areas, though they will often make their way around the world. One of the reasons gray whales are so unique is their lengthy seasonal migratory routes.

Different populations of gray whales have different migratory routes, though most impressively, the eastern Pacific gray whale will travel more than 5,000 miles each year to get from the Chuckchi and Bering seas to the California Gulf.

This migration is the longest annual migration of any mammal on Earth!

While the gray whale is often seen as prey for killer whales, one of this species' biggest threats is humans. Luckily, the gray whale is under protection and is no longer hunted on a large scale, putting it on the IUCN's "being of least concern" list.

Bowhead whales are part of the family of baleen whales and can only be found in the Arctic and sub-Arctic waters. One special fact about the bowhead whale is that it is the longest-living creature known to man.

An average bowhead whale can live for over 200 years!

With such a unique body shape, it's easy to spot bowhead whales in their homeland.

They have the largest mouth of any creature on Earth, stretching for more than 16 feet. 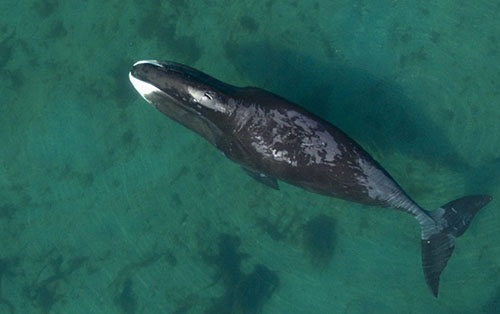 Though the bowhead whale was almost hunted to extinction throughout the 19th century, new laws came about in the 1960s to protect this great baleen whale.

Baird's beaked whales are arguably the most popular and well-studied species in the beaked whale family.

These beaked whales live primarily in the Northern Pacific ocean.

While Baird's beaked whale is listed under the IUCN's "species of least concern," it is still protected by the United States.

FUN FACT: These whales got their name from renowned naturalist Spencer F. Baird, who was the very first curator to be named at the Smithsonian Institution.

Unlike many other baleen whales, the Antarctic minke whale was rarely a victim of commercial whaling due to its relatively low oil yield and smaller size. However, it is now on the IUCN's near-threatened list due to overfishing of krill in its habitat.

It can be found in both tropical and polar waters, though it mostly enjoys temperate regions.

The sei whale is also considered the fastest cetaceans, reaching speeds of up to 31 mph when moving across shorter distances. Because of its large size, the sei whale was hunted often during the peak of commercial whaling and is now listed as endangered by the IUCN.

The southern bottlenose whale is a species of whale that lives in the Antarctic.

Unfortunately, there is little information about these bottlenose whales due to the fact that they live elusively in the coldest regions of the Southern Ocean.

Many scientists believe they can dive for up to 40 minutes at a time, which is far more than most other whales.

These toothed whales look a lot like bottlenose dolphins, which is why it's easy to confuse them. 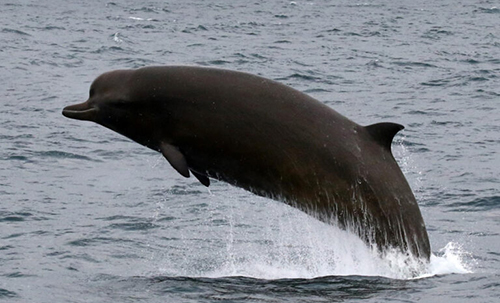 To continue learning about whales, head over to our recent articles!

How Do Whales Sleep?