Sharks are some of the fiercest and most majestic creatures in the ocean!

Over the years, we've been doing what we can to help preserve them. In those efforts lies spreading knowledge and awareness about the different types of sharks.

The question we see most often is,

Just how many types of sharks exist in the world?

Come dive into the deep blue with us as we explore the various types of sharks found around the globe!

How Many Types Of Sharks Are There?

As of today, there are about 400 types of sharks in the world. We'd have to write an entire novel to talk about all of them. Instead, we're going to talk about some of the most popular species known to man.

In fact, this type of shark is so large that its eggs are twice the size of an ostrich's.

The whale shark is a type of carpet shark. One of the longest whale sharks ever discovered was around 62 feet in length.

To put that into perspective, it's about the size of a lane at a bowling alley! 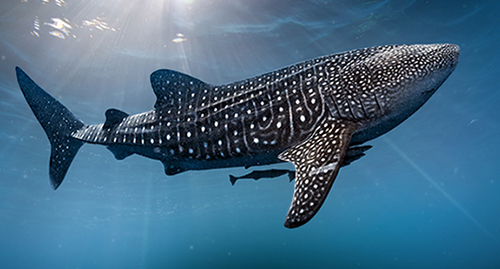 These sharks may live to about 130 years old, and they don't reach sexual maturity until about 25 years old.

While the whale shark species might be massive in size, they are completely harmless when it comes to humans. Because they are so graceful and peaceful, swimming with whale sharks is common amongst tourists in certain parts of the world.

These sharks use their 3,000+ teeth for filter feeding, eating eggs, krill, and larvae. 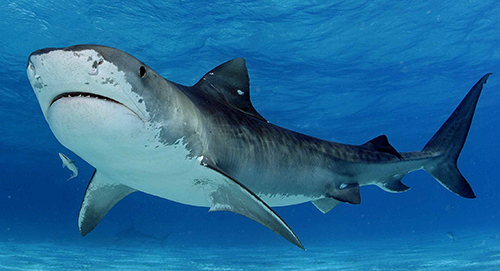 The tiger shark is a type of ground shark that is ultra-motivated by food.

In fact, these tiger sharks are so motivated by food that they've been found to swim into hurricanes to try and find fish or other creatures that have died.

A tiger shark can weigh up to 1,700 pounds and will eat just about anything it can lay its giant jaws on.

The shortfin mako shark is the world's fastest shark. These sharks belong to the family of mackerel sharks and use their bullet-shaped bodies to propel them through the water at speeds of 45+ mph. 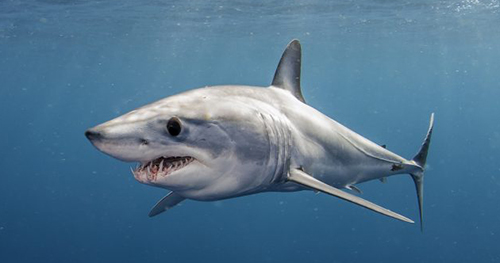 Beyond their incredible speed, they are some of the most intelligent sharks around, thanks to their brain-to-body ratio. 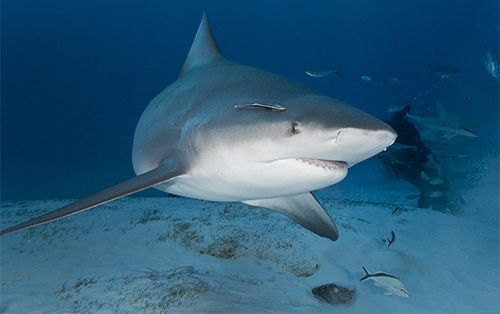 Bull sharks are notoriously aggressive creatures. But, unique to many other sharks, a bull shark can live in saltwater and freshwater.

The bull shark belongs to the family of ground sharks.

They can swim upstream across tumbling rapids, similar to how salmon migrate, which is why people often find this type of shark in freshwater lakes. It isn't uncommon for a bull shark to travel thousands of miles upstream to try and find food. So

FUN FACT: In 2010, Brisbane, Australia, flooded, and bull sharks were found throughout the streets.

The hammerhead shark belongs to the family of ground sharks.

While there are nine types of hammerhead sharks in the ocean, the great hammerhead is the most popular.

They have a unique cephalofoil head that allows them to see 360 degrees around their body, giving them incredible depth perception compared to other sharks. 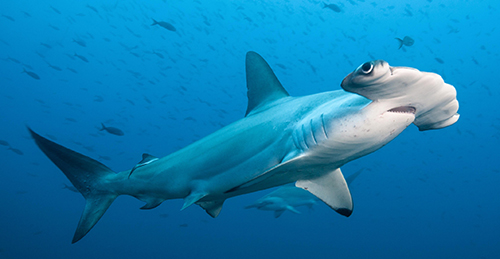 The hammerhead spends about 90% of its time swimming sideways, using its head as a literal hammer to pin its prey to the ocean floor. 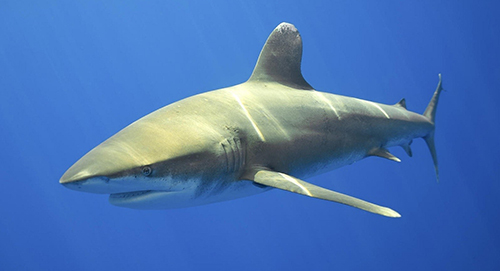 The oceanic whitetip shark is a family of endangered sharks. One unique thing about these sharks is that they are active during the day and night. They love warm water, though they will often spend time swimming in the deep looking for food.

The oceanic whitetip shark gets its name from the white tips found on its fins. They can be found all over the world, often hunting in large packs like wolves.

Nurse sharks are interesting in that they are some of the most inactive sharks out there.

They often sleep during the day before exploring the sandy ocean floor at night.

While it's still a good idea to give a nurse shark its space, they are often very slow and don't get aggressive.

The ideal meal for a nurse shark would consist of squid, sea urchins, and conchs. 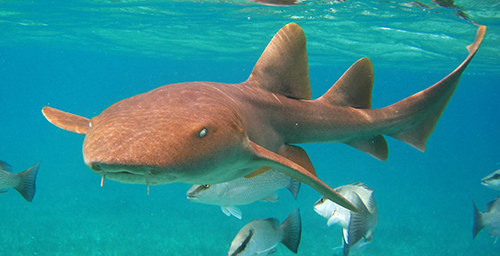 A nurse shark will often suck its food into its mouth, similar to the way a vacuum cleaner works.

The small knobs on the face of the nurse shark work similar to taste buds, allowing it to find food that tastes good.

If not in captivity, you will often find this shark swimming around the tropical waters of the Indian and Pacific Oceans.

The leopard shark is one of the most common shark species near the coast of California.

The leopard shark gets its name thanks to the black spots found on its skin, which look very similar to the skin of a leopard.

Leopard sharks are a great source of food for humans, though it is said that no leopard shark has ever killed a person.

These sharks, similar to blacktip reef sharks, are often found in zoos. If found in the wild, they'll often be in shallow bays with lots of mud for them to hide.

The common thresher shark gets its name from its whip-like tail, which it uses to stun fish before feasting on them. The thresher shark tail is almost as long as its body.

Thresher sharks can grow quite large, often reaching around 20 feet in length.

Some people mistake the thresher shark species for dolphins, as you can often see them jumping high out of the water.

Researchers recently discovered that thresher shark packs migrate hundreds of miles out to reefs in search of food. These reefs are where threshers find millions of fish congregating.

The basking shark is a type of mackerel shark that can reach up to 32,000 pounds in its adult life. These gigantic sharks can reach up to 26 feet in length, though, thank Poseidon, they are totally harmless to humans!

Basking sharks are very closely related to great whites, which is why they have a similar appearance. 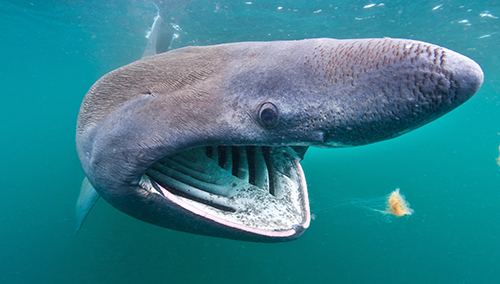 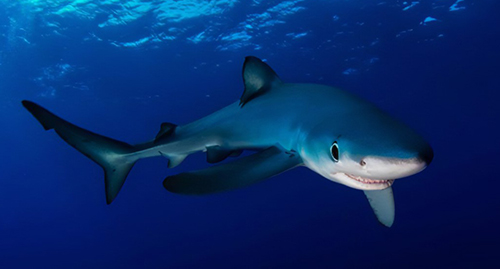 The blue shark belongs to the family of ground sharks.

Many people refer to the blue shark species as the "wolves of the sea," as they travel at great speed.

They are incredibly effective hunters and are unique to most sharks in that they give birth to live young.

A blue shark can reach up to around 10 feet in length!

The zebra shark is a unique type of shark that is so gentle that you can keep one in an aquarium with other fish without having to worry. This species of carpet shark can be found throughout the Pacific and Indian Oceans, often traveling on the sandy depths and through coral reefs. 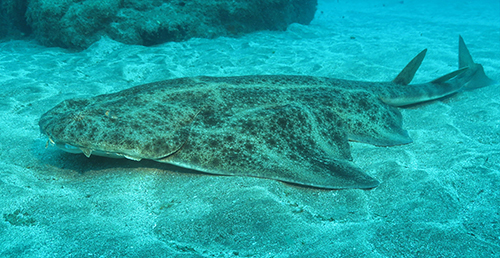 The angel shark is an incredibly unique species in that it looks very similar to a stingray. Angel sharks can grow to about five feet in length and weigh about 77 pounds on average.

Some people refer to the angel shark as monkfish or sand devils.

The angel shark will often use its camouflaged body to catch prey. With powerful suction cups on the bottoms of their bodies, angel sharks can snatch prey in a tenth of a second.

The goblin shark might have some of the most bizarre-looking features compared to the different types of sharks on this list.

Their long, sword-shaped snouts stick directly out of their heads. What's truly unique about the elusive goblin shark is that it is one of the few species of surviving ancient sharks.

A goblin shark can easily reach up to 20 feet long! Because it lives in the deepest part of the ocean, called the Mariana trench, we know little about these animals. To read more about the goblin shark, and other deep-sea dwellers, head over to our Mariana trench animals article.

Do Sharks Have Bones?

Biggest Shark In The World