Biggest Shark In The world

Out of all the creatures in the world's oceans, sharks elicit a special mixture of fascination and fear for most of us. But, what's the biggest shark in the world? Can we even be sure if one species is really larger than another?

From the whale shark to the great white, this article will give you an overview of the world's largest shark species. We'll cover the size, distribution, diet, etc. of each shark, giving you a great overview of these magnificent creatures.

What Is The Biggest Shark In The World?

So, what's the biggest shark in the world? You might be surprised to hear that three of the largest species of sharks in the world, including the largest fish in the ocean, are actually completely harmless. Instead, the largest living sharks are filter feeders. This means they eat plankton, small fish, and other small prey by filtering them out of the seawater which passes over past filter pads inside their mouths as they swim.

Although these species do have hundreds of tiny teeth, they are vestigial and are neither used for feeding nor defense.

With the largest known specimens having a total body length of around 60 feet and weighing over 70,000lbs, whale sharks set several size records in the animal kingdom.

Not only are they the largest sharks currently known to exist, but they are also the biggest fish of any kind, and the largest non-mammalian vertebrate species. In fact, only certain whale species regularly outgrow this enormous, benign shark.

There have also been unconfirmed reports of significantly larger individuals up to as much as 78 feet, although many researchers remain skeptical. Animals of this size, if real, would weigh over 100,000lbs. The average size of a whale shark is generally considered to be just under 50ft for females, with full-grown males being somewhat smaller, between 26 and 30 ft.

This huge fish, rivaling some whales in size and weight, has been found in tropical and temperate waters around the world. Population numbers are not easy to estimate, but whale sharks are generally considered an endangered species.

According to scientists, whale sharks live for between 80 and 130 years, although more data may refine this estimate. Part of this longevity may stem from their excellent healing abilities. These animals have been known to re-grow damaged sections of fin and their striking spotted markings even re-form over old scar tissue eventually. 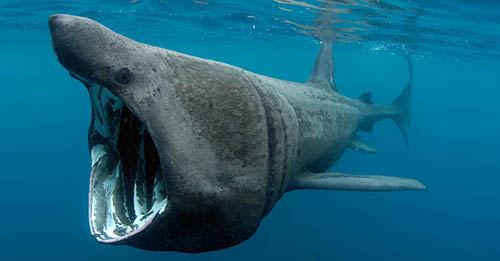 The basking shark can be found in cooler waters than whale sharks, with a range extending as far north as the arctic circle and as far south as Tierra del Fuego.

Although members of this migratory shark species prefer cold waters, basking sharks have been documented crossing the equator as part of their widespread movements.

Basking shark sightings have also occurred both over the continental shelf and in deep water, unlike many species which prefer one or the other.

Basking sharks typically reach sizes of around 26 feet, with some specimens recorded closer to 35 feet. This places the basking shark squarely between the whale shark and great white sharks in our roundup of the largest sharks currently found in the ocean.

The third filter feeder on our list was only discovered 44 years ago in 1976, although the aptly named megamouth shark is thought to have remained relatively unchanged for several million years.

Megamouth sharks are rare, with fewer than 100 specimens having been documented.

They are thought to be widely migratory, spending their days in deep water and coming closer to the surface at night. 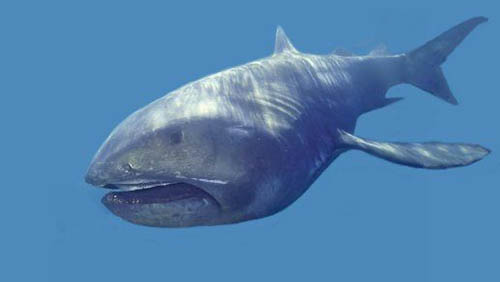 Megamouth sharks are thought to grow to a maximum of 18 feet, far smaller than whale sharks or basking sharks, as well as some of the largest predatory sharks. Their distinctive appearance with a wide head and the appearance of unique "lips" gives them their common name.

When most people think of sharks, it's the toothy, fast moving predators which spring to mind. Great whites, tiger sharks, the great hammerhead shark and even thresher sharks are all highly evocative.

But, which are really the biggest sharks in this category? A couple of species towards the top of the list might not be what you'd expect. 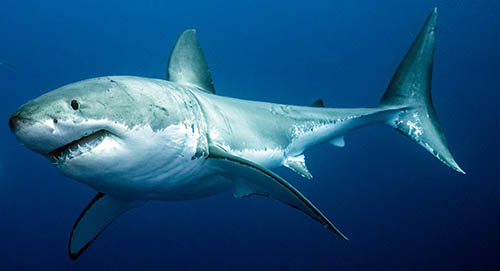 Even if your knowledge of sharks comes primarily from Hollywood movies, you're bound to have heard of great white sharks as one of the most iconic and fearsome predators to stalk the world's oceans.

There is some controversy about the true size of the great white shark. The largest verified specimens have been as much as 20ft long. However, documented reports exist of specimens closer to 25 feet.

These are contentious due to different measurement techniques e.g. whether the tail tip is stretched out, and irregularities in the photographic evidence.

Although some species of predatory shark may grow longer than the great white shark, it is in overall bulk where they have the clear size advantage. The largest female specimens have been estimated at between 4200-5000lbs, making the great white shark significantly heavier than its closest rivals. They are thought to have a natural lifespan of least 70 years, and females only reach sexual maturity after 30-35 years (males a little sooner, at 25-30 years).

Great white sharks are voracious hunters, with their prey consisting primarily of seals, dolphins and other marine mammals, as well as fish, seabirds, turtles, and even other sharks. They are also the number one shark associated with attacks on humans, although people are not considered part of their diet and most instances appear to result from human encroachment on their feeding activities.

In addition to predation, great whites also scavenge. They are regularly seen feeding on the carcasses of dead whales. Meanwhile, contrary to the great white shark's image as an apex predator, orcas (killer whales) have been documented killing great whites and eating their livers.

Greenland sharks and Pacific sleeper sharks may well be the biggest sharks you've never heard of. Both of these related species live in the icy waters around the arctic circle, in the Atlantic and Pacific oceans respectively. They have a distinctive look from other shark species, having a much smaller dorsal fin especially.

In terms of size, Greenland sharks have been measured at as long as 24 ft, easily rivaling great white sharks.

The Pacific sleeper shark is less well known, with recorded specimens topping out at 14 feet. However, they are believed to reach a similar size to their Atlantic ocean cousins.

So why are these two sharks not generally considered the largest species of predatory shark? The answer lies in weight. Their longer, slenderer outline means that even the heaviest Greenland shark ever recorded still only weighed in at around 3100lbs, well short of a large female great white.

Fun Fact: Greenland sharks can reach up to 392 years old, making them the oldest sharks alive!

The tiger shark is so-called because of striped markings in younger specimens, which tend to fade as the animals mature.

Average sizes range from 11-14 feet, while the largest of all confirmed tiger sharks captured, a pregnant female, was over 18ft long and weighed over 3000lbs.

This was partly due to her pups though, and a typical maximum weight is closer to 2000lbs.

Tiger sharks have the broadest diet of all sharks, eating fish, octopus, crabs, smaller sharks, birds, dolphins, snakes, and pretty much anything they can catch. They have even been known to consume man-made inedible objects, which are sometimes found in their digestive systems when caught. Unsurprisingly, tiger sharks are also responsible for the second-highest number of attacks on humans, behind the great white shark.

The tiger shark is a solitary hunter usually found in warm waters, rarely venturing beyond the tropical and sub-tropical zones.

The largest members of the hammerhead (Sphyrnidae) family, great hammerhead sharks can reach a very respectable 20 feet in length.

They are even more streamlined than sleeper sharks and typically weigh less than 1000lbs. A highly successful reef-hunting specialist, they are found in most coastal tropical waters around the world, including the Mediterranean sea.

The broad, hammer-shaped head from which these sharks get their name contains an unusually high number of electroreceptors. By swinging their head from side to side, great hammerhead sharks (and their smaller relatives) are able to sense and accurately pinpoint their prey. This helps them to find rays hidden under the sand, as well as the wide range of other fish, cephalopods, crustaceans, and smaller sharks which make up the majority of their diet. 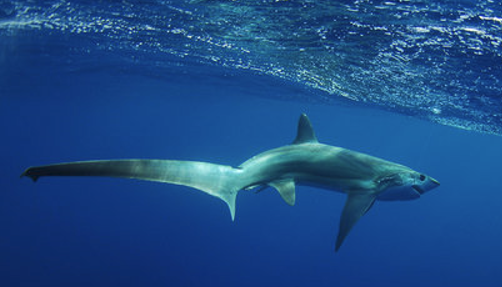 The common thresher shark, or Atlantic thresher, grows to about the same total body length as a great hammerhead.

However, more than half of this length consists solely of the tail, specifically the upper lobe of the caudal fin. Not only does this oversized tail help thrashers to swim fast, but they also use it as a weapon to stun prey, particularly small fish such as anchovies, sprats, and herring.

Thresher sharks are thought to be one of the most wide-ranging shark species, having been found everywhere from the cold waters of the North Atlantic ocean to the tropical climes of the Indian ocean.

Based on the most likely measurements of large specimens, rather than pure average, and taking into account both length and weight here is our rundown of the largest sharks in the world.