In the world of great white sharks, perhaps one of the greatest was discovered during our lifetime.

The colossal monster known as Deep Blue is the largest great white shark ever caught on camera by scientists and marine biologists.

Continue reading if you dare to learn more about this fascinating, one-of-a-kind sea creature.

Deep Blue, who comes in at 20-feet long, eight feet high, and 2.5 tons, is the largest Great White shark ever photographed.

With massive fins and razor-sharp teeth, it was quite an astonishing discovery for marine biologists.

The unique thing about this particular shark is that she was likely pregnant when discovered.

Female great white sharks often tend to remain in solitude at high depths until they are about to give birth, at which point they will head closer to the shoreline. 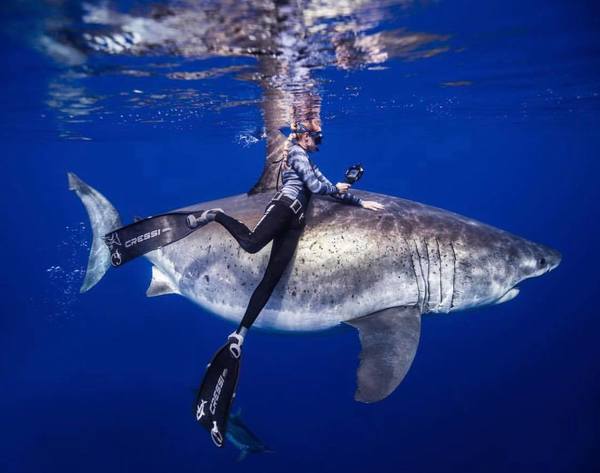 Rumors of Deep Blue had been brewing since the 1990s, but it wasn't until 2014 that she was caught on camera off the coast of Guadalupe Island in Mexico during a portion of Shark Week by researcher Mauricio Hoyos Padilla. When Padilla posted a video of her to Facebook in 2015, it immediately went viral.

She was eventually spotted in Hawaii by a number of researchers who were, at the time, studying tiger sharks in the region. She was scavenging for food from a sperm whale carcass during her discovery.

Deep Blue is quite unique in that she has notable markings and pigmentation on her body. Thanks to her girth, many scientists speculate that this shark was pregnant when she was discovered.

While she is most often identified by her size as one of the largest great whites that humans have ever come across, she also has quite a unique pattern on her underside where the white meets the gray.

George Probst, a shark photographer who has filmed Deep Blue, says that "That’s as unique to a white shark as our fingerprints are."

A notable and defining feature that separates her from other sharks is the laceration over the right side of her body, which can be seen in captured footage.

How Has Deep Blue Interacted With People? 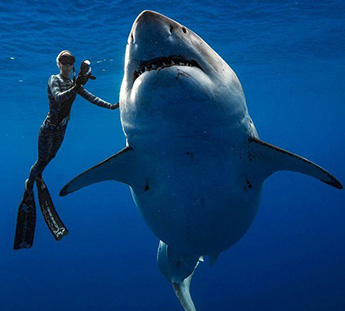 White sharks are infamous for being the most dangerous & aggressive sharks in the ocean. And though Deep Blue is the biggest great white known to man, she does not have an aggressive personality.

There is video footage of her approaching a diver in a non-aggressive, somewhat curious manner, as well as being tolerant of other divers around her.

In one case, she allowed Ocean Ramsey, a revered marine biologist, to go swimming with her while holding onto her fins. Of course, prior to allowing the marine biologist to swim with her, she had already fed on a sperm whale carcass, which may have contributed to her docile behavior.

Ocean Ramsey was the first person to swim alongside the shark. However, she was criticized by a number of scientists including David Shiffman and Michael Domeier, who said that her behavior was unprofessional and could be pinned as borderline animal harassment. Some wonder if the shark Ramsey swam with was actually Haole Girl, another very similarly shaped long great white. However, the proof behind that claim is not substantial, by any means.

When Deep Blue was filmed a few years before that with Mauricio Hoyos Padilla in Mexico, the video showed her swimming calmly around the cages, only ever taking a few curious bites at the cage. Padillo, who was on top of the cage at the time, was never attacked.

Deep Blue has also been caught on footage swimming around with dolphins.

Kimberly Jeffries, a female ocean photographer based out of Oahu, Hawaii, is known for capturing some of the most haunting and exciting photos of Ms. Blue. She spotted the 20-foot shark back in 2019 and took some of the most famous photographs of her off the Hawaiian coast. 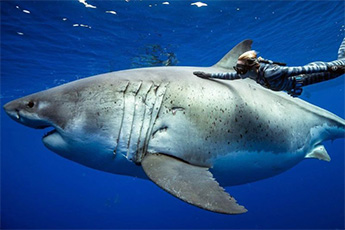 This massive great white shark is said to be around 50 years old. Researchers say that she will continue to grow in size over time, though at a much slower pace than before.

As with most female great whites and great white sharks in general, Deep Blue has an estimated life expectancy of around 70 years.

Though reports claim she has been tagged, Padilla denies these claims. While multiple shark trackers exist, as of now, scientists are not tracking Deep Blue's movements. However, she is often spotted in her usual territory, such as Hawaii and Guadalupe Island, during certain parts of each year.

Though she might be the biggest great white ever filmed, she is not the largest shark specimen in history. That award goes to the Megalodon, a prehistoric predator over 60 feet long that toured the world's ocean millions of years ago.

The Megalodon was part of the Otodontidae species, a species that diverged into the great whites that we know today. The Megalodon was the world's most powerful ocean predator during its lifetime.

While it isn't possible to track Deep Blue, you can use tools like Ocearch, an interactive shark movement map, to track other famous great white sharks all around the world.

This unique, marine biologist-developed GPS device transmits scientific data, including location and depth, to give scientists a better understanding of the behavioral patterns of sharks.

Head over to our Shark Tracker article to learn more!