The megalodon was once one of the world's most enormous creatures. The estimated size of the megalodon has evolved over the years. As paleontologists stumbled across more megalodon fossils, they gained a better idea of accurate historical sizes.

So, how big was the megalodon shark?

Come dive in with us as we learn more!

As of today, the majority of the scientific community believes that megalodon sharks were between 60 and 70 feet long and weighed somewhere between 50 and 70 tons.

This information comes from fossils that date back to the Miocene and Pliocene epochs.

Compare that to the modern great white shark, which typically maxes out around 3.5 tons and 21 feet long, and it's easy to imagine what a monster this sea predator was.

The picture below shows a megalodon shark size comparison.  You can see estimated megalodon sizes in red and grey.

Whale sharks are the biggest sharks in the world. Accurate modern whale shark size is shown in purple.

The great white shark is in green. 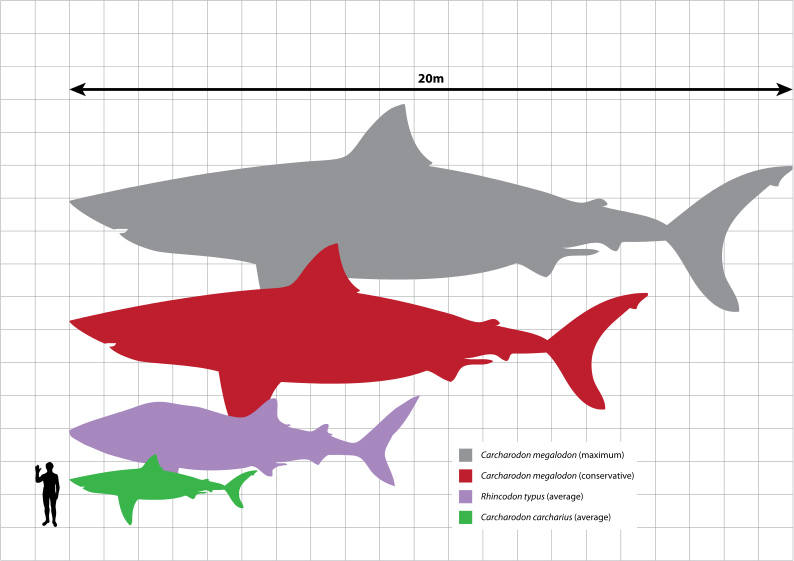 The strangest thing about the megalodon is that we weren't able to get a better idea of its size until June 2021. Up until then, scientists assumed that these water dinosaurs reached somewhere between 50 and 60 feet in length. Just recently, new technological advancements were made, tipping us off that they were closer to 65 feet in length.

In order to determine how large these prehistoric sharks were, researchers needed to investigate how their bodies changed over time. The idea was to see how today's regular sharks have changed in terms of proportion over time, as these changes are not similar at all to humans'. For this reason, it was a bit easier for us to look at the growth curves of a few modern shark species to get a better projection of the shape of megalodons and how they grew as time progressed.

You'd probably never want to be caught swimming in the same waters as one of these sea monsters, and seeing how you compare to one is likely to solidify your fears.

We can definitely say that a human would have been a nice little snack for this prehistoric shark.

Researchers agree that the average human would be just slightly larger than the megalodon's dorsal fin. It is estimated that the dorsal fin of a megalodon was about 5'3" tall. 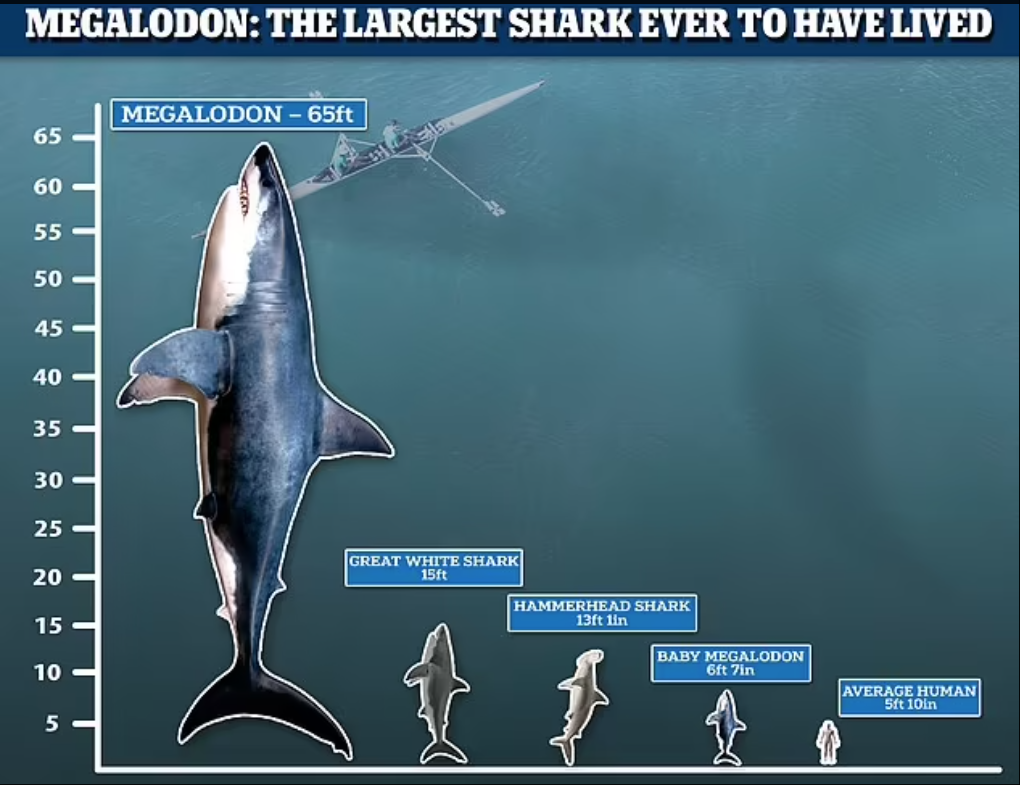 As we know, the blue whale is the largest animal known to man in today's terms.

So, what does the megalodon blue whale size comparison look like?

Well, when it comes to megalodon vs blue whale, the blue whale actually wins this one in terms of size and weight. If we look at the weight estimates of the megalodon, scientists believe they weighed about 227,000 pounds. And at a minimum, blue whales weigh 290,000 pounds, slightly beating the megalodon.

The largest blue whale ever found weighed around 418,000 pounds, which was almost 75% larger than some of the largest Megs. 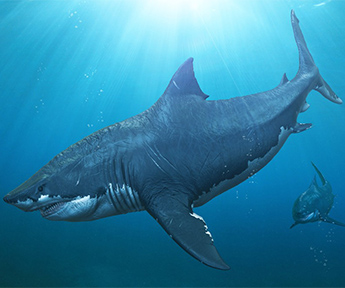 A grown blue whale is the ocean's largest sea creature at over 80 feet in length. However, some of the longest blue whales have grown up to 110 feet, more than 20 feet longer than the suspected length of the Meg.

It's pretty likely, however, that the megalodon could have easily eaten the blue whale. This is in part due to how large its jaw was. Megalodons had five rows of ultra-sharp teeth, meaning the blue whale would have had to put up a serious fight.

The blue whale only began to evolve after the extinction of the megalodon. When the megalodon went extinct, there became one less apex predator for baleen whales to worry about, allowing them to grow and evolve into the largest whales we have today. 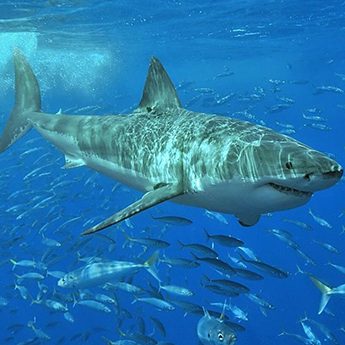 Great white sharks are some of the largest sharks in the ocean today. And interestingly, they are also relatives of the Carcharocles megalodon.

Each of these sharks have ruled the ocean during their own eras, and most likely would not have gotten along if they had lived side by side.

Most scientists believe that the megalodon was more than 50 times the size of the great white shark.

The great white shark of today maxes out at around 5,000 pounds.

The mighty megalodon could swim at a top speed of 2.5 meters per second!

Plus, a single megalodon tooth was often around seven inches long. Compare that to a great white shark, whose teeth rarely exceed two inches, and you're talking about some serious teeth.

If you've ever been to a natural history museum, you may have seen how enormous megalodon teeth were, as several large natural history museums have replica jaws available. Most ordinary people can fit their entire bodies inside the mouths of these sharks, which were about seven feet long and filled with five rows of more than 250 teeth.

Thankfully the megalodon is no threat to us, but to find out what you should watch out for in today's oceans, we invite you to take a peek at our most dangerous sea creature article.

As the apex predator of its time, the megalodon ate everything from dolphins to whales to large fish. Other shark species were victims of the megalodon as well. Megalodons were known for hunting throughout the temperate seas, which is proved by fossil findings in every ocean region with exception of the Antarctic.

Scientists aren't totally sure of how megalodon's mated with one another. However, it is thought that they either use ovoviviparity or vivipary methods, similar to the sharks of today. The ovoviviparity method is when the mother's body develops eggs and only releases them when they hatch. On the other hand, the vivipary method is when a baby shark develops in the mother before she gives birth to it.

So, as you can see, the megalodon's size is not something to be reckoned with. With collected fossils and teeth, scientists were able to gather data on megalodon distribution. As of today, scientists have found the megalodon in just about every ocean throughout the world except for the Antarctic oceans.

However, similar to other sharks, the majority of the megalodon's skeleton was made out of lightweight cartilage, including its jaw. The bad thing about cartilage is that it decomposes quite quickly. However, tooth enamel preserves far better than cartilage, which allowed their jaws to last for thousands of years, giving us a better understanding of these massive beasts.

While some insist that the megalodon is still alive, in actuality, the modern ocean's depths are without the massive megalodon, but its history and kin still remain.