When Kelly Slater's Lemoore Surf Ranch first came into the public eye back in 2015, it left the surfing community awestruck. Even after seven years of operation, it seems difficult for everyday surfers to find information about the Surf Ranch.

Today, we're going to dive in and tell you everything that you need to know before you think of dropping your life savings to take a ride on this artificial wave.

What Is The Surf Ranch?

Kelly Slater, arguably one of the biggest surfers in the world, has been dreaming about this wave his whole life.

He had his very first interaction with an artificial wave pool in Texas when he was 14 years old.

In 2007, he founded the Kelly Slater Wave Company with the goal to create a self-reinforcing solitary wave that maintained a constant shape and velocity, essentially creating the perfect, man-made wave.

The project was ultimately dubbed the Surf Ranch and the very first prototype was unveiled in Lemoore, CA back in 2015. 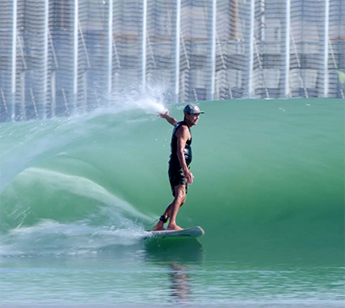 At the time, the pool created barrel waves that lasted for 45 seconds.

The testing site is about 2,000 feet long and 500 feet wide. While the original artificial lake was built for water skiing, it is now the premier site for surfing man-made waves.

The beauty of the Ranch is that it is open throughout the year and can be surfed at any time thanks to the unique supercomputers that output ocean-like waves regardless of weather and wind conditions.

How Much Does A Trip To The Surf Ranch Cost?

The costs depend on the deal that you choose, though you're typically looking in the ballpark of $10,000 for the "Surf Ranch Experience." This number includes the premium tier experience and a booking fee. Every wave costs around $450 on average, according to various sources.

How Does The Surf Ranch Work?

What is important to understand is that the way surfing works at the Ranch is not the same as you would expect from most wave pools. The technology used in this pool is much different from the Waco Surf Park's 'Perfect Swell Technology,' which creates three different wave sets.

At the Surf Ranch, you get a single, long ride. As far as the public knows, the Surf Ranch produces 15 waves per hour, meaning that any surfer who visits could expect to catch around 120 waves in a day if they hit every wave.

What Kinds Of Boards Are Best To Ride The Wave?

While there is no "magic" surfboard that you need to enjoy the most "perfect wave in the world," it is suggested that surfers bring a board that they would use for fast, three-to-four-foot waves.

The wave is pretty easy to surf, according to many people who have been there. One of the biggest pieces of advice that the Surf Ranch team gives people who are visiting the Lemoore location is to be conservative on your first few times out.

Riders often get nervous going in and screw up the first few times because they try to get too deep in the pocket too quickly.

How To Get In

For regular surfers, the Lemoore, California Ranch is still somewhat limited in terms of visitability. While you may be able to book a day at the BSR Surf Resort out in Waco, Texas, you can't just book a day and show up at Slater's wave pool.

As of now, there are a few ways that you can enjoy the perfect wave, including:

The very first event held at the Ranch was the Founders Cup, hosted by the WSL. The title for the first Surf Ranch Pro was taken home by Gabriel Medina and Carissa Moore.

The World Surf League (WSL) introduced the Freshwater Pro back in 2019 and created general admission and VIP tickets for those who wanted to go out and enjoy the event.

Beyond that, the WSL also created a "Full VIP Experience" ticket for those who wanted accommodation, concert access, catering, merchandise, and two one-hour surf sessions with rental equipment.

As for the cost, people can expect to spend next to $5,500 plus the booking fee. Unfortunately, you likely won't be the only Surf Ranch Pro VIP surfer there on the day you book the event, meaning you will likely have to share the water with other surfers. 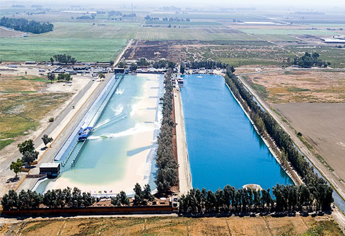 If you have tons of money to spend, you could book the entire wave pool facility out for the day.

While this opportunity is open to any surfer who can fork over the cash, it is more often than not used for training camp events, national team events, or brand events.

Breaking down the cost even further, you are looking at spending anywhere from $290 to $415 per wave.

For people who aren't part of a team or surf league, you can expect to spend anywhere from $3,500 to $5,000 in total for a day at the surf ranch with ten friends. With this many people, you could each catch close to 10 waves in a day.

If that seems like a high price to pay for a not-so incredible barrel, we think you're absolutely right.

If you can't stomach the insanely high price for a one-time trip to the pool, or you don't have a team sticker on the front of your surfboard, you might still be in luck, as there are a few special occasions that the Kelly Slater Wave Company opens its waves to family and friends.

If you know the right crowd, you may just be able to get in and catch a wave or two, as Kelly Slater does open the Ranch for friends and family of the staff every so often.

Final Thoughts - Is Trip To the Surf Ranch Worth It?

At the end of the day, and after looking at those insanely high numbers, you may be wondering whether or not a trip to the surf ranch is worth it at all.

Well, one thing to note is that the money surfers pay to get into this pool goes far beyond getting to ride a wave. Since Kelly Slater first developed the Wave Company back in 2007, more than $30 million has been poured into the project's research and development.

Essentially, any money that you pay to get into the pool goes to that research and development.

However, it is also safe to say that Kelly Slater and the team have recouped that money over the course of its existence. Plus, we know that the WSL acquired the majority stake in the company in 2015, meaning they have been making a fair chunk of change off of this project as well.

According to surfer Jimmi Cane, the waves have been using solar energy since the 2016 update. According to statistics, every artificial wave costs about $11. If you think that the WSL is losing any money on this place, you're crazy.

When it comes down to it, getting a chance to ride this artificial California wave means being part of a team, paying for VIP, or rubbing elbows with some close friends.

To see a list of the 7 best wave pools in the world, check out our surfing wave pools page.