The 100-foot wave has been a dream for many big wave surfers ever since it was first dreamed that such a thing might be possible. But just how close have they been to achieving that goal, and are waves that big really even out there?

Performing on the biggest waves possible is the aim of an elite group of surfers who take their sport very seriously indeed. In this article, I'll dive into their history and the modern-day science driving their search for the elusive 100-foot wave.

The Origins of Big Wave Surfing

In the 1950s-1960s and largely fueled by improvements in surfboard technology, Hawaiian surfers and some of the more intrepid visitors to the islands started turning their attention from the gentle, near-shore breaks of Waikiki and Honolulu towards the raging surf around Waimea and Makaha on the north side of the island. 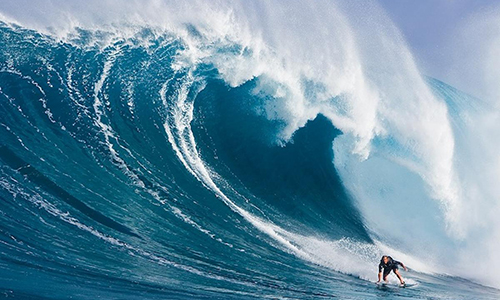 These pioneers were riding long, narrow boards known as guns, specifically designed for speed and stability in big waves. The size limit was really only defined by how fast you could paddle the board. This is because the larger a wave, the faster it travels through the water. To catch a wave successfully you have to be approaching the same speed as the wave's movement as it begins to lift and push you.

At the time, 30-40ft waves were considered pretty massive. Even now, the Guinness world record for the largest wave ever caught by paddling stands at 61 feet. That record is held by Shawn Dollar for a ride caught at Cortez Bank near the Californian coast.

Incredibly impressive in its own right, but it seems unlikely anyone will be paddling into a 100-foot wave any time soon. 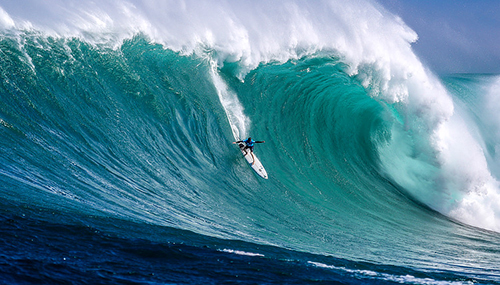 Many a big wave surfer of the paddling era would drive out to spots like Peahi on the North Shore and gaze longingly at waves too heavy, gnarly, and fast-moving to consider catching by paddle power alone.

However, fast forward to the 1990s and a group of incredibly brave (and arguably crazy) local big wave surfers found a way to tame the beast now known as "Jaws".

They attached foot straps to their surfboards and used a dirigible boat with a powerful outboard motor to tow them onto the face of the waves, generating plenty of speed to match any conditions.

Shortly afterward, the growing crew of tow surfers upgraded to jet skis rather than dinghies, due to their superior speed and maneuverability. With all that speed on tap, along with a shift to more maneuverable and manageable tow boards, they could get towed into a wave of almost any size imaginable.

The quest for surfing 100-foot wave was officially on! Now all they needed to do was find one...

Riding giant surf isn't as simple as taking a bunch of jet skis down to your local beach and hoping for the best. Firstly, there are only a handful of known surf spots around the world which could produce rideable waves of that size.

Outside of Hawaii, some of the best-known big wave surfing destinations are Cortez Bank and Mavericks (California), Aileens and Mullaghmore (Ireland), Shipstern's Bluff (Tasmania), and Nazaré (Portugal). The last of these has been considered for some time as providing the best chance of surfing a 100ft wave.

Aside from Nazaré, Portugal has hundreds of waves up and down its coastline. However, on any given day, Nazaré has much bigger surf than any of the others. This is due to a deep-water canyon near the coastline which literally funnels swell in towards the iconic big wave location.

Modern-day big-wave surfers are constantly watching the meteorological data and swell forecasts of Nazaré and other big-wave spots around the world. The key is to find that sweet spot where a giant swell combines with favorable near-shore weather conditions. For example, if it's too windy you won't be able to catch and ride the wave without being thrown off by the bumpy chop on the face.

The Quest for 100ft Nazaré

During the Winter season, huge storms in the Atlantic ocean send swell toward the Portuguese coast and Praia do Norte beach in the town of Nazaré soaks up all that energy. Over the past decade, every serious big wave surfer has made the pilgrimage there to chase the worlds biggest waves.

The official Guinness World Record for the biggest wave ever surfed was set at Nazaré in November 2017, measured at 80ft high.

However, other notable attempts have been estimated as even bigger.

Garrett Mcnamara, former holder of the record with a 78ft ride at Praia do Norte in 2011, appeared to break his own record (and possibly the 100-foot barrier in the process) in January 2013. Unfortunately, difficulties with measuring the attempt prevented it from making the record books as the largest wave surfed.

Aside from Garrett Mcnamara, a few others also lay claim to being the first to surf the 100-foot wave. Carlos Burle of Brazil caught one of a similar size to Garrett's, also in the 2013 season, and is still awaiting official confirmation of the measurement. Meanwhile, in 2014, Benjamin Sanchis caught a 108-foot monster in Nazaré but missed out on the record as he fell and failed to complete the ride.

The current unofficial largest wave mark is held by a young Portuguese big-wave surfer called Antonio Laureano. In 2021 he caught a wave estimated to be 101.4 feet high. This may end up being enshrined as an official record but the World Surf League and Guinness World Records are yet to comment.

Enter North Carolina local Mason Barnes. Inspired by legends such as Garrett Macnamara (with whom he is close friends) and Rodrigo Xoxa, Mason Barnes began traveling to Nazaré a few years ago with the aim of making his own mark on the legendary waves of Praia do Norte.

After an epic session in 2020 where Mason rivaled Xoxa's record, he became even more determined to bag a 100 footer of his own in Portugal. It appears that in February 2022 he may have achieved that goal.

The mountain of water Mason Barnes caught on what he himself describes as "a dangerous, scary day" is believed by many to comfortably eclipse the 100-foot mark. However, the process by which these huge waves are measured is complicated and painstaking, so it may be some time before we see official confirmation of just how big Barnes's latest effort really was.