From whale sharks to great whites and beyond, you can track just about any kind of shark these days. Today, we're going to dive in and check out a couple of high-quality websites that allow you to track sharks and see where they're traveling.

Researchers have tagged a wide range of sharks, including mako sharks, tiger sharks, and hammer heads. But, of course, tracking the great white is the most popular!

Before we dive in and explore the sites you can use to track sharks, we want to make sure you understand how tags work.

The Smart Position tag, otherwise known as the Temperature Transmitting Tag (SPOT), is a special tag in that it displays the location of a shark every time it comes above the surface of the water for more than 90 seconds.

Researchers place SPOT stags on a shark's dorsal fin. All of the data from these tagged sharks is then sent to satellites, giving us an approximate, real-time location.

You can see this data on unique tracking maps like those below, allowing you to follow sharks as they roam around the globe. But, of course, it's not all fun and games. 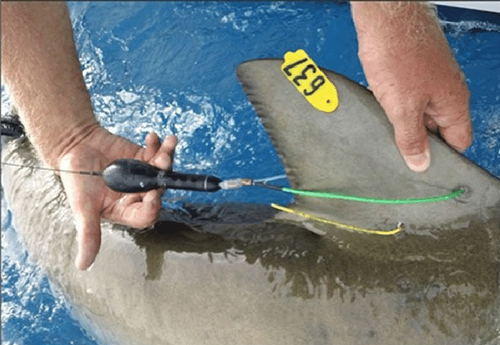 Researchers use the information from tagged sharks to gain a better understanding of mating grounds, birthing grounds, and migration paths. Plus, knowing where sharks spend most of their time helps us to avoid potentially dangerous encounters.

Ocearch is a data-centric organization that helps marine biologists and researchers collect more insightful data from the ocean. The organization is focused on gathering information for Great white sharks, as well as several other apex predators.

Build into the data collection software is the Ocearch shark tracker, a robust and easy-to-use global shark tracker. Anyone interested can download this ap and watch the movement of the animals Ocearch has tagged.

The people of Maryland were frightened when they found out her tag pinged her inside the bay. Of course, later on, the ping was determined false. This white shark broke the water's surface off the Georgia coast most recently.

You can see other animals, including alligators and turtles with Ocearch's software as well!

The app is filled with tools that provide scientists with information on movements, detection, and shark sightings, helping to raise awareness about sharks so that we may co-exist with the species.

Dorsal is one of the most advanced shark reporting applications on the planet. The best thing about the app is that it is entirely free! Local authorities and beachgoers can alert other people about shark sightings or shark attacks at their shores with this live shark tracker.

The app has 250,000 users as of today and features a wide range of reports from official channels, including several Dorsal aerial surveillance partners. In addition, Dorsal is available to the general public of the USA, Hawaii, and Australia. 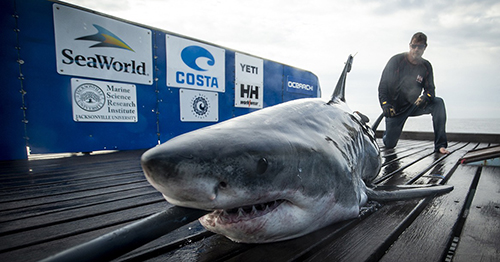 The PacIOOS is a shark tracker specifically for Hawaiian tiger sharks. These tiger sharks were tagged with the latest and greatest in satellite tagging technology, allowing us to see where they are at every time they break the surface of the water.

Beyond the location of these sharks, the tags give us important oceanographic data, including sea surface temperature, oxygen profiles, and deeper ocean temperature.

SharkSmart is an app that was developed for the Australian public to track sharks so they can stay safe at the beach. The company refers to this added element of caution as "Sea Sense."

Before going in the water, you can check your Sea Sense to get an update on the latest tagged shark detections or shark sightings. The app also sends convenient alerts to your phone!