The Endless Summer Search For Surf

If you love surfing, this is the game you've been waiting for all your life. Immerse yourself in the Grand Theft Auto of surfing! Bruce Brown films introduced you to the surfing lifestyle through his iconic The Endless Summer surf adventure film, and now The Endless Summer Search For Surf video game puts you into a surfing adventure in an immersive 3D open world tropical adventure surfing simulation.

Explore by land, race along by jet ski, and compete against your friends in contests. Discover new surf spots, waves and locations guided by local surfers. The two player feature, invites you to bring a friend on your adventure, and share your experience. Improve your wave riding and have a surfing safari in a realistic physics based surfing experience.

The Endless Summer Search For Surf is unlike any surfing game in the past, and is destined to make surfing history because of its advanced features.

Not only does it have realistic 3D completely physics based surfing, that has been praised by surfers, but it also has an open world adventure and competition component, allowing two players to play at the same time. 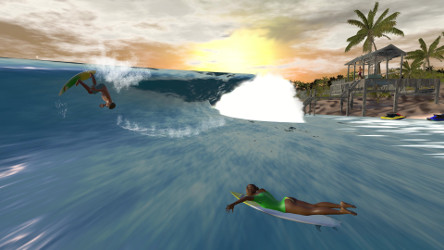 The combination of these features being used for the first time in a surfing game adds a new dimension to surfing games, allowing players to explore for surf breaks together and to compete with each other in timed scored contests.

The Endless Summer Search For Surf is available for PC or MAC on the Steam store. In the Summer of 2022 The Endless Summer Surfing Challenge will be released for Xbox on the Windows store. The Xbox version includes two player contests, and has 12 levels of increasing difficulty, and focuses on wave scoring to challenge your surfing ability while attempting to complete the challenge levels.

“I love the spirit of the game.” -Customer quote 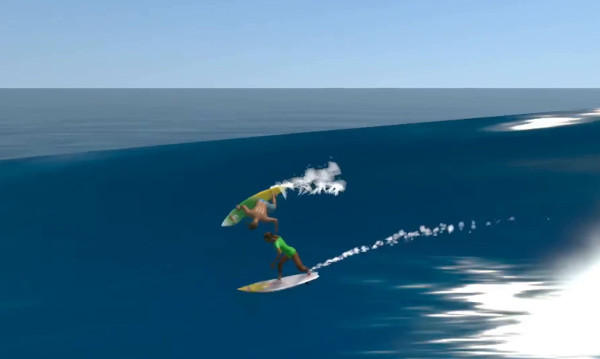 The Endless Summer Search For Surf starts with a surfer on land at a surf spot surrounded by a group of tropical islands.

Talk to the non player characters to find out what to do.  Go in the water at the first break and learn to surf on the easy short consistent beginner break.

The non player characters in the water give tips on how to play and hints at where to go next.

As surfing ability improves, and one becomes comfortable with the controls, take the suggestions from the surfers and progress to other increasingly difficult breaks, and eventually, go off into

the open world by jet ski or land and explore the islands for new breaks.  There are 19 breaks, with different size, speed, and shape of waves.  Some have set waves and rocks and a pier to avoid, and some are slower, easier and more equipped for doing tricks.

There is a two player split screen option, so two players can play simultaneously, explore together, and even surf the same wave. A contest can be started at any time, so the two players can compete against each other, for the chosen amount of time and waves scores, similar to the professional surfing contest format.  Wave scores are calculated and displayed for each wave.

The surfing is the most realistic of any surfing game.  The player can paddle out, duck dive through waves, and line up to catch a wave like in real surfing.  Players must get in position to catch the wave; too far in front and they wipe out, too far behind and they miss it. To make it easier there is a "Cheat" button that instantly puts the player in position to catch a wave at the press of a button. No need for tedious paddle outs.  You’ll wish you had that feature in real life.

There are three camera views that toggle through using the same key button press, so the player can zoom out to make it easier, zoom for a view closer to the wave, and zoom in to surf from the surfers point of view for a realistic surfing simulation.

There are 6 players to choose from, each turn differently and ride at different speeds.  Choose from a big wave pin tail gun to a swallow tail short board.  Foot position can be switched from regular (left foot forward) to goofy foot (right foot forward).  There is also a body board player. Surfing on the wave is as easy as turning left and right on the controller or keyboard. Players can get by, and do really well using only these two keys. Small left and right turns creates speed, big spaced out turns makes for off the top carves and bottom turns. Advancing beyond these simple moves, two other buttons are added; stall and slide. Use stall and slide to do advanced maneuvers. Slide out the tail, cutback hard, catch air, and stall into a tube ride. Using the right controls on the right waves at the right times allows for realistic surfing maneuvers. 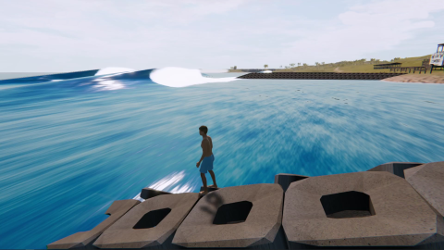 Waves at each break are different. For easy breaks, waves are slower, and always break in the same spot.

Try out different breaks and figure out the best way to surf each break.

“…And you can tell it’s made by folks who actually might surf.” -Customer quote

Players can be changed during game play, and cameras for surfing can be changed while surfing. Take your jet ski and explore the islands. Go on land throughout the islands. Non player characters are scattered throughout the game and have dialogue attached to give tips, make suggestions, and talk surf. Weather changes, and there is a short night time during the game. There are surf check towers and a map, to help players find new breaks. The game has a cool chill tropical environment with bouts of radical surfing. 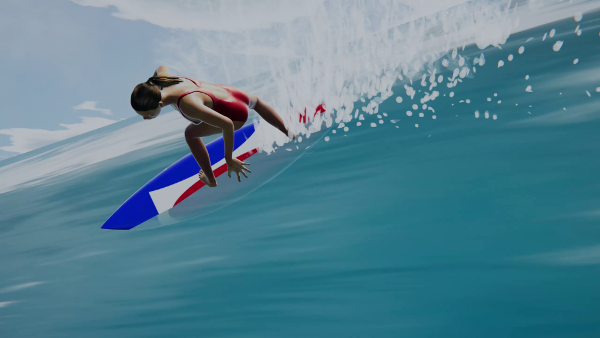 9. Surf Contest Scored and Timed with two players at the same time.

10. Game progression based on chatting with game surfers.

13. Controller support or keyboard and mouse.

1. Duck diving. Players have to paddle out and duck dive waves (button press) to be at an advantage to catch waves.

2. Wave catching. There is no button to catch a wave. Paddle get in position and catch a wave. Too late and miss the wave, too early and wave breaks on you. Press a button to stand up.

3. Wave Catching Assistance, or “Cheat” button. Special button “Cheat” puts the player in a good position to catch a wave. Press “Cheat” wait for a wave, paddle, and get up.

4. Set waves. Some breaks have waves that break further out than other waves.

5. Physics based surfing. Surfing is based on how you position on a wave, and the wave moves you and provides speed and momentum, which is realistic and different from animation based movement.

6. Pump for speed. Turning makes the surfer go faster, but only assists as much as the player positioning and speed of the wave allows it to help. This is a key concept that makes the surfing more realistic.

7. Open world – Go on land anywhere, take jet skis around the islands. Jump off rocks, piers, cliffs and jet skis onto the waves. Never before seen in a surfing game.

10. Surf Contest Scored and Timed with two players at the same time. Surfers can catch the same wave or different waves, ride together or compete. Scoring is based on a 10 point perfect wave score scale, scoring highest for long rides, airs, tube rides, schwacks (off the lips or hard turns), and getting speed and surfing fast, Contests are, or can be, made like real life professional surfing league contests if 2 wave scores are chosen for the number of scores. . Never before seen in a surfing video game.

11. Wave Score. Each time a wave is surfed at the end the wave score is shown. The score is the same as the wave contest scores based on ride length, schwacks, airs, surfing fast, and tube rides.

12. Shidashita the Olympic surfing venue is set up with a contest stage as a premier location to hold a contest, even though contests can be held anywhere at any time during the game. 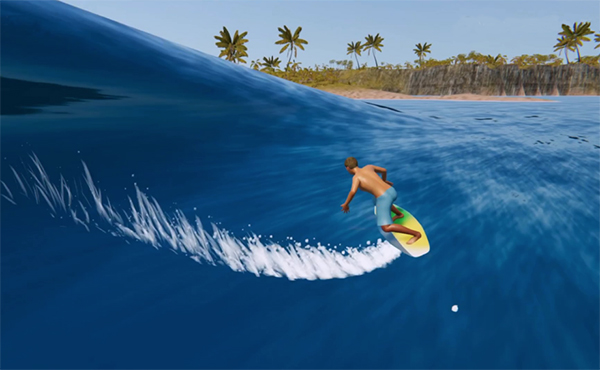 13. Game progression based on chatting with game surfers. Surfers at the breaks and on land give advice on how to play, surf, give tips, or just chat about surf and things. Learn to surf and play by chatting with other characters you meet. Never before seen in a surfing video game.

14. Tailslides, off the lip schwacks, cutbacks, airs, and tube rides are possible with simple controls. At a minimum, players must learn four basic buttons, paddle forward, stand up when they catch a wave, and turn left and right to ride the wave. In addition there is a duck dive, a cutback and tailslide button, a stall to slow down button, and a button to do airs. Players can easily learn the basics, and improve as they progress to more

advanced surfing moves. On screen help is available to learn the buttons.

16. Controller support or keyboard and mouse.

17. 3 toggled camera views, including sudo-first person. Easy to change views on the fly. The far away easy cam is best for learning and checking for waves. The regular view is best all around, and between the pro and easy views. The pro view is nearly first person view and makes the surfing seem more realistic because you have the view of a surfer on a wave.

18. 18 breaks; long point breaks, barreling reef breaks, and shifty beach breaks. Each of the breaks is different, and has features that vary from other breaks. Waves vary in size, and how fast they are. Some have fast sections and slow parts. Some are steep and barrel and some are mushy. There are some really big waves, breaks with set waves, as well as more consistent and uniform waves. Along with wave variety, some spots have rocks in the lineup, there’s a pier where you can shoot the pier, or ride through the pilings. Some spots break close to shore and others are way out in the ocean away from land.

19. Secret spots and big wave breaks. There is a live map available to orient the player and assist with finding breaks, that shows where the breaks are and how difficult they are. But there are also breaks with no other surfers and maybe even some that aren’t listed on the map.

20. Different size players ride different boards, from fast fish shapes to pin tail mini guns. Some surfboards work better in different types of waves. So there are 5 surfers to choose from, and each surfer is a different size, and has a different type of board. There is a short boarder, who rides more typical to a realistic surfing experience, then two faster surfers that allow for more speed and make it a little bit easier to progress to moves like airs and faster moves. There is a big wave gun surfer on a large pin tail board that excels in big surf, and a light surfer on a real fast tracking lightweight shortboard fish model that has more of an arcadey feel than the more realistic characters.

22. Shark attack. A shark will attack you if you drive your jet ski recklessly.

That wraps up our sneak peak preview of this video game but if you would like to see more games then check out our best surf video games article.