What’s the Difference and How Many Fins Are Right For You?

Understanding the difference between thruster and quad setups is important for a number of reasons. All fin setups have their own advantages and disadvantages, and finding the right fin setup for your needs can help maximize your surfing session.

Come dive in with us as we explore the difference between these two popular fin setups.

What is a Thruster Surfboard?

Simply speaking, thrusters; as they are regularly referred to, are three finned surfboards capable of being able to perform an ever increasing variety of hotdog type maneuvers with impeccable control. While this type of board may be slow to start upon standing up, once moving, the third center fin is instrumental in providing hold and speed control courtesy of the bit of drag that a trailing fin provides.

Best suited to a type of wave that allows for multiple maneuvers in good conditions with minimal added speed necessary to beat crumbling sections. Think Lowers, not J-Bay (granted I did ride a twin last I was at Lowers and there's something there, I've gotta say). Thrusters were made for ripping turns and fluidly connecting sections on perfect waves.

Thrusters were boards built to perform. They were built to control. To be able to control your board, whilst pushing it ever further into the realm of where a wave was meant to be surfed. That's what thrusters are for. AI (Andy Irons) was a shining example of what thrusters were built to achieve; and to this day, no one puts a surfboard on rail, and in the places of a wave like he could. Additionally; another surfer that never wavered in the public debate about thruster vs quad was Mr. Taj Burrow (a personal favorite). Taj is famous for lightning quick redirections, especially on his backhand, as well and mind blowing aerial antics like throwing tail, that are easily 5 years ahead of the time.

#1 The South Bay Board Co- Ruccus 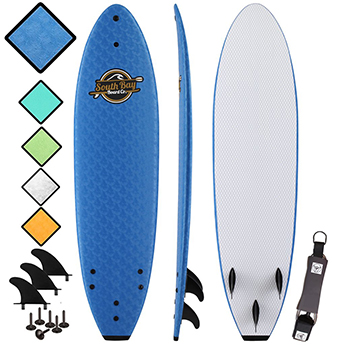 This board is awesome for those looking to rock up to the beach right away thanks to this boards wax free design.

This board also incorporates the use of two wooden stringers and a fiberglass rod through a closed cell EPS foam core, along with heat release valve and PVC lined fin plug holes to prevent water absorption, so you know that this surf machine is a quality build.

In addition, the enhanced double concave on bottom lends itself towards speed and maneuverability; making this soft top surf sled a real winner in terms of performance capabilities. 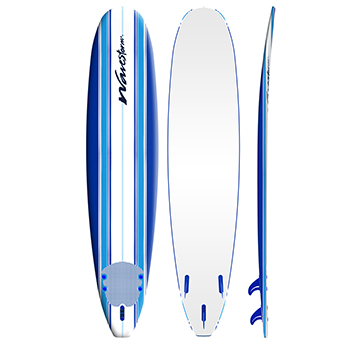 Of all the things Costco is great for, ranging from free samples and chicken bakes to affordable high quality petrol, the Wavestorm is without a doubt one of them.

It is perhaps their most beloved and despised product, regularly flying off the shelf every spring before the doldrums of summer kick into high gear and the small surf associated with it brings the plethora of high performance ripping to a halt and in turn forces everyone and their mum to remember that foam is your friend and nothing is more friendly than a Wavestorm.

While commonly associated with subpar surf and kooky behavior, a simple google search titled "JOB Pipeline Wavestorm" will decidedly show that these boards handle. While perhaps not the most high performance softie in the world, it is unquestionably durable (and Costco's return policy is bombproof, I've tested).

What is a Quad Surfboard?

A quad fin surfboard, better yet known simply as a quad, is a board with four fins. This quad fins design allows for more hold than a traditional twin fin yet still provides a looser and faster feel than a surfboards with the thruster fins setup.

This on going debate of quad fin vs thruster ultimately comes down to waves, and more specifically the types of waves and conditions one normally surfs in.

This is due in part to a quads ability to draw, and hold, a higher line on a wave's face; and this allows quads to garner more speed and hold a rail in hollow conditions. 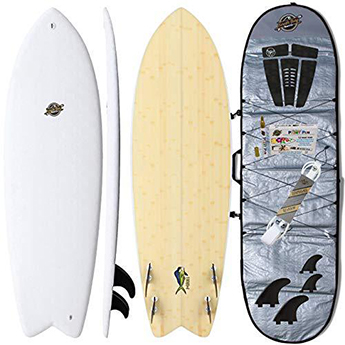 The first thing to note about this blade is the construction, and South Bay Board Co's use of fiberglass to create durable surfboard with a true surfboard feel courtesy of the rigid bottom that is not commonly found on most soft tops today.

Add in the fact that they use 2-6oz layers of class and a solid wooden I-beam stringer and you've got yourself a product made to last.

Lastly; take into account the tapered rails, proper nose rocker, plus the fact that you have the option to use real FCS fins on this puppy and you'll see this board is easily something that can be used by beginners and expert surfers alike. 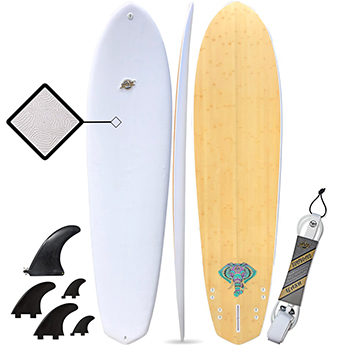 This board also contains that crucial fiberglass bottom mentioned above, and what's really cool about this surfboard is the tail.

This sort of diamond tail lends itself to a board with a bit more hold while still allowing for release when needed.

A variation of this was made famous by a very popular surfboard made, by Lost, called the Rocket.

That being said, the amount of foam in this board combined with the quad fin setup will leave those that ride it with plenty of speed to zip across the water with ease.

In summation; when trying to decide which surfboard is right for you, and more importantly which fin setup between quad fins vs thruster, you need to evaluate which type of waves you'll be surfing most often; and how you wish to surf overall. When it comes to which board to ride, the thruster vs quad.

We know that thrusters offer more control while quads tend to be much faster. So what are you looking for and which is right for you?​

Personally, based on my own experience, I trend more often towards thrusters but I do have a couple of quads; and then again, I've been riding a twinnie configuration nearly all year so what do I know.

Email us with any additional comments, questions or concerns!