Shore breaks can be impressive, awe-inspiring, and more than a little scary.

With the right swell and beach conditions you can get incredible surf, but as with any ocean activity, dangerous situations should be identified and avoided.

Anywhere waves break directly onto the shore can be unsafe. Abiding by a few top tips will significantly reduce your chances of serious injury.

Read on to learn how a shore break is formed, where to find the best in the world, and how to keep yourself in one piece.

What Is A Shore Break?

A shore break occurs when an abrupt change from deep to shallow water is found very close to the shoreline.

This causes the incoming waves to break directly onto the beach, focusing all their energy in one small area.

Due to the shape and erosion pattern of most beaches, shore break conditions are commonly found around high tide.

This is when the depth of water over sandbanks or reefs further out in the bay is sufficient for waves to pass over them without breaking. 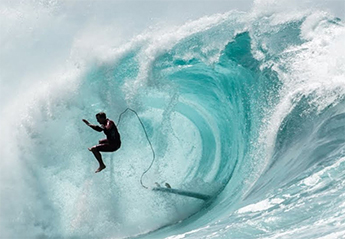 Some locations (especially beaches with a steep slope) also have shore break during mid or even low tide, but this is less common.

Often, the water being drawn up into the peak of the breaking waves results in a very shallow section in front of the wave. Powerful shore break waves can even suck up all the water, breaking onto exposed sand or rocks as a result.

Can You Surf Shore Break waves?

Riding shore breaks is not suitable for a beginner surfer but can be rewarding for advanced riders under the right ocean conditions. When swells arriving at an angle to the beach hit the shallow water the shore break can line up in a similar style to point break surf conditions, with the breaking wave running along the shoreline rather than just closing out all along the beach at once.

Although they don't often produce the same length of ride as true point breaks, good shore break spots make up for this with more raw power than point break waves, producing heavy barrels when the swell picks up to head high or above, especially under the right wind conditions.

Where Are The Most Famous Shore Breaks? 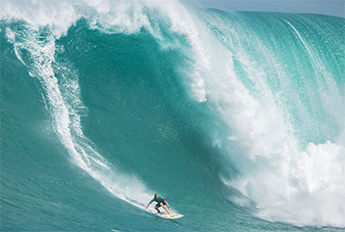 Haleiwa, on Oahu's famous (or infamous) north shore in Hawaii, is home to Waimea Bay. Some of the biggest waves in the world are found here.

In addition to the well-known big wave break on the outside, the Pacific swells produce a heavy shore break which generally closes out and is considered more of a hazard than a recreational opportunity.

However, on the right day and with a favorable wind, barrel rides are possible there and a handful of locals such as Jamie O'Brien are generally quick to capitalize.

The beaches around Puerto Escondido in Oaxaca, Mexico, are home to several high-class waves.

Of these, Zicatela shore break is known as one of the least forgiving, but can produce incredible right-hand barrel rides for those surfers with sufficient skill, experience, and the bravado to take it on. 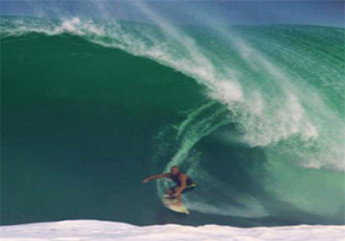 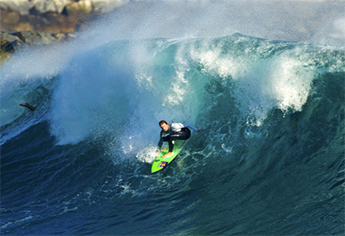 Wedge waves are a special type of shore break, of which this iconic spot at the south end of Newport Beach in California is easily the best known. As the surf rolls in, part of the wave hits the jetty at the end of the beach and bounces back at an angle to the main swell.

This pushes a ridge along the face of the wave, forcing it to break as a fast-paced, hollow, left-hand ride. It can get busy, adding to the risk of severe injury, but that doesn't seem to put off surfers looking for this unique rush.

Yes, shore break waves can be very dangerous, especially for anyone who isn't used to those conditions. Any situation where large powerful waves break into shallow water has the potential for serious injury or even death.

The most common cause of injury when surfing or swimming in shore break conditions is being pitched in the lip of the wave and slammed onto the sea floor.

This regularly results in broken bones, back injuries and neck injuries.

These last two involve damage to the spinal cord. Spinal cord injury is particularly worrying as it can easily result in fatality or paralysis. 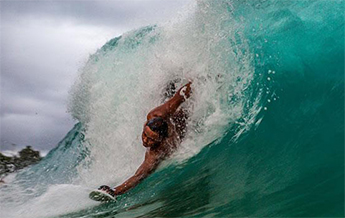 It is vitally important to protect your head and neck if you are caught in the surf zone. Keep your arms in front of you when falling so they can cushion any impact with the sand or rocks.

Even though risking a broken arm may be less than desirable for a surfer, injuring your head or neck would be much worse.

Other common hazards associated with shore break waves are being held down on the ocean floor, or being swept out to sea, both of which can result in drowning. The undertow caused by the wave breaking directly onto a steep shoreline is one way this happens, but if the beach has deeper channels alongside the shallower water, it is common for rip currents to form. Rip currents are fast-moving and can carry you quickly away from the shore. They are one of the main ocean hazards affecting beachgoers.

Rip currents are usually easy to spot if you know the signs. If you see two areas where the waves are breaking and a section in between them where the water looks much flatter, especially with an abrupt change between the zones, there's a good chance the deeper water between two sandbanks is causing a rip current. Swirling eddies of water are also a good indication of where a localized rip current is meeting the prevailing current.

If You Are Caught in A Rip Current

Rip currents can swiftly drag swimmers out toward the open ocean. They often travel faster than you can swim, so you'll just tire yourself out if you fight directly against one. Instead, swim parallel to the beach and, although you will be carried a little way out, you should be able to escape the rip current since they tend to be quite narrow.