Biggest Waves In The World

Hundreds of miles off any coast lies the deep unknown, where monstrous storms wreak havoc, and epic waves begin taking form. While many of these waves cease to make it to shore, there are a few incredible places around the world where you can watch these colossal ocean giants come alive.

Today, we're going to explore 8 of the biggest waves on Earth.

Hold onto your bikini bottoms!

The 8 Biggest Waves In The World 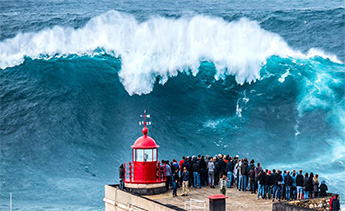 When Nazaré has a good day, it is the biggest wave in the world. Yes, it may not be nearly as consistent compared to other famous big waves, such as Teahupo'o and Pipeline.

However, to this day, it holds the record for the biggest wave ever surfed.

That's a pretty strong record. The funny thing is, Nazaré, Portugal is a small fishing village and one of the most unassuming big wave spots on Earth.

Nazaré reaches its peak during the winter when MASSIVE swells sweep their way in from the deep Atlantic, bringing this monstrous wave back to life. During this time, surfers flock from around the world to catch a tow into this big wave.

The secret of the beast is the geography that lies beneath the wave. Shallow waters are met by an extremely deep canyon as the water approaches the coast, creating a monumental wall of water that launches far above the surface. This is the only shore break wave that made it on our list.

In actuality, four main variables must combine to form these massive waves, including the local water channel, quick depth reduction, swell refraction, and converging waves that come from the canyon beneath the surface.

There is no other place on Earth where you will get to enjoy this kind of surfing.

The previous world record for the biggest wave surfed was in Praia do Norte, Nazaré.

Jaws, located on Maui's North Shore, is someone of a mystical surf spot. On any given day, you can expect to get a 15ft swell or more. However, on good days, you'll see this beast grow anywhere from 30 feet to 80 feet tall.

Compared to other Pacific Ocean waves, this is the largest, fastest, and heaviest.

However, the thing that genuinely makes Jaws a one-of-a-kind big wave is that no matter how large it gets, it always maintains its beautiful shape. 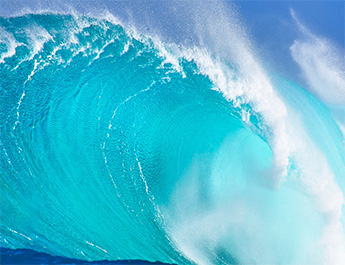 The reef that lies beneath the surface will often produce right-handed barrels, though once in a blue moon, you'll find some extremely dangerous yet totally rideable, lefts.

If you're unlucky to be surfing when it closes out, you can probably kiss your board (and maybe some of your bones) goodbye.

While surfers often get towed out into Jaws, it is possible to paddle out if conditions are right. Surfers that want to impress and show off their skills will usually be found riding deep barrels or carving the nice, open face of the big wave.

The wave became famous during the 1990s when big wave surfing legend Laird Hamilton decided to take a surfboard with foot straps and have himself towed into the wave for some of the first true big wave surfing in history. 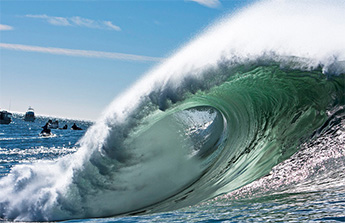 This monstrous A-framer, which breaks out at Half Moon Bay's Pillar Point in Nor-Cal.

During the 1980s, this break gained its reputation and was said to be named after Maverick, a German Shepherd who took a swim out in the waters back in the early 1960s.

If you surveyed the surf community at large, they would probably tell you that Mavericks is the most dangerous big wave in the world.

In the realm of big wave surfing, it is one of the few waves on the planet that challenges the fear, anxiety, and confidence of surfers.

While the wave itself isn't the scariest thing in the world, there are plenty of other variables surrounding the spot that make it quite terrifying.

For starters, you have to paddle out to takeoff in Mavericks, meaning surfers must be cautious when it comes to rip currents and sharks. The sets move very quickly here too, which is why you'll often see surfers getting pinned down for two waves or more.

Lastly, the water can get very cold. Sometimes, it's as low as 50 degrees Fahrenheit. If you don't have the right wetsuit, expect to go blue in the toes.

The life of one of the world's greatest surfing legends, Mark Foo, was claimed at Mavericks back in 1994. It is said that his leash got snagged on the bottom.

While there are thousands of surf spots around the planet, many still say that big wave surfing was born in Waimea Bay.

In many ways, it was thanks to Greg Noll's fearless vision. While it may not have the same mystical reputation as Jaws, Waimea has a wild reputation all its own.

This incredible surfing spot lies on Oahu's North Shore and offers a unique ride compared to Pipeline, which is just down the way. You'll often see 50-foot waves out in Waimea, which is when the greatest surfers on the planet gather. 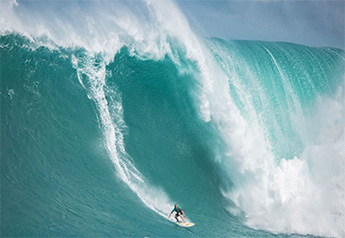 As with many big wave surf spots, Waimea claimed the life of a few surfing legends, including Donnie Solomon back in 1999 and Dickie Cross back in 1943.

In 1989, Titus Kinimaka hit a nasty wipeout resulting in a snapped femur.

On multiple occasions, The Quicksilver Eddie Aikau Invitational has been held here, inviting some of the best surfers in the world to come and take their chances.

Large swells will often close out the entire North Shore. Though, when they do, a few great spots like Waimea Bay start coming to life.

During significant swell periods, expect to see tons of riders fighting for a spot to surf. If you want to catch a giant wave or enjoy the views, we recommend getting to the beach early. 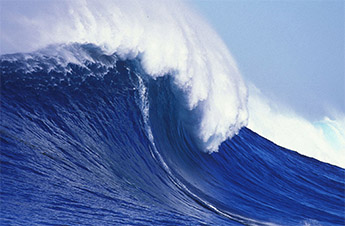 Out of all the big waves on our list, Cortes Bank might be the least accessible. You'll find it 110 miles off the San Diego shoreline in California.

Depending on the tides and height at sea level, the spot sometimes turns into an island.

Of course, for big wave riders, it is well worth the trek. The beauty of Cortes Bank can be found deep beneath the Pacific's surface, where a submerged chain of mountains creates one of the world's biggest waves.

You can find this underwater seamount just 6' from the water's surface.

The ocean is exposed to tides, wind, and currents in all directions, making it quite unpredictable.

However, the best conditions come around when west swells draw deep water towards the western shoreline, detonating the top of the tiny, submerged Cortes Bank.

While some daredevils first tried to surf this while break back in the early 1990s, it wasn't until the late winter of 2001 that six riders, including John Walla, Evan Slater, Brad Gerlach, Mike Parson, Peter Mel, and Ken Collins, took on the beast during "Storm 15."

Parsons hit the heaviest wave of the day at 66' high, giving him two Guinness World Records and winning him the XXL Award. Even though the wave is pretty far out, crowds often gather during huge surf swells.

In Northern California just off the coast of Pebble Beach lies Ghost Trees. Yes, you can play a game at the world's most famous golf course while watching people surf into oblivion.

Compared to most breaks around the globe, Ghost Trees is extremely cold and has enough sharks to scare the most experienced surfers. The cherry on top is the line of boulders that rest along the bottom of the bay.

People often get towed in when surfing Ghost Trees, as the face of the big wave can get up to 80 feet in height when enough energy is drawn from the Northern Pacific. 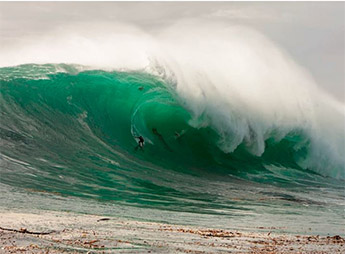 Along with this 80-foot height, you'll often see 20-foot wide boils bubbling about along the wave face. Two of the first people to surf Ghost Trees were Adam Replogle and Peter Mel.

Only the best big wave surfers out there are able to tackle the mighty Ghost Trees, as it is extremely dangerous. Because it has a very sudden step and breaks next very close to nearby rocks, it has garnered a reputation as one of the most gnarly surf spots around.

As of today, no surfer is allowed to use personal motorized watercraft near the break, as the NOAA banned it after Peter Davi's death. This famed fisherman and surfer spent many days out in the waters of Ghost Trees. 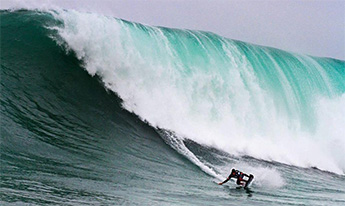 Pico Alto is the giant of South America.

Located just off the coast of Peru at Playa Norte, you have to go about 1.5km to reach this massive wave.

If you're looking for a big wave surfing experience that provides Hawaiian power with the chill of a European wave, Pico Alto can provide.

You will have to paddle out for about thirty minutes until you're able to maneuver into position.

Plus, you'll only be able to ride the wave when the face is smooth and clean. For big wave surfing at Pico Alto, the wave needs an eight-foot swell at least.

Dungeons can be found just off the coast of Hout Bay and is by far the biggest wave in South Africa.

The Roaring Forties bear massive swells that fly at the shore, sometimes at nearly 30mph.

Suddenly, a swell will hit the local reef before forming into an enormous right-hander.

Wiping out at Dungeons can be a death sentence, as many surfers find themselves getting dragged 30 feet underwater. 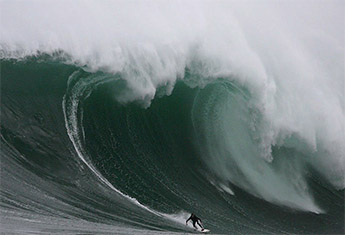 Not only is this heavy wave terrifying, but the surrounding area is one of the most popular shark-infested bodies of water on Earth. Now that you know where the biggest waves in the world are, come check out the biggest waves ever surfed!