Edward RyonMakuahanai Aikau was born on May 4th, 1946. His untimely death occurred on or around March 17, 1978. He was a legendary surfer and lifeguard from Kahului, Hawaii.

He made a name for himself as the very first lifeguard in Waimea Bay, and the entire north shore. Situated on Oahu Island, over 500 lives were saved by his actions.

He was also well known for navigating the massive Hawaiian surf, as well as his achievements in such events as the 1977 surfing tournament hosted in the name of Duke Kahanamoku.

His Life: The Legend of Eddie Aikau

Eddie Aikau's hometown was Kahului, in Maui. The younger of two children, his name is ripe with meaning; "Makua" and "Hanai" in the Hawaiian language roughly translate to a parent who feeds and is adoptive, fostering, or nurturing.

The lineage of Eddie Aikau traced back to Hewahewa, who was the kahuna nui - high priest - for two kings: Kamehameha I and Kamehameha II. 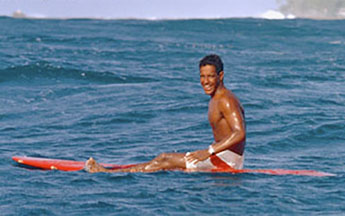 In 1959, his family moved to O'ahu, and when he turned 16 the surfer dropped out of school for employment at a canning plant for Dole, the pineapple producer. The money he earned there enabled him to purchase a board so that he could begin surfing. One of the places he would cut his teeth is Waimea Bay, where some of the best surfers in the world reside.

In 1968, Honolulu tasked him with becoming the very first lifeguard. Eddie Aikau's jurisdiction included all the beachfront from Sunset to Haleiwa. Not one person died on his watch during his tenure at Waimea Bay, even though some of the waves he encountered crested 3 dozen feet high. Waimea Bay is famous for having massive waves, even in the winter.

By 1971, Eddie Aikau had earned awards for his accomplishments as a lifeguard. Seven years later, on the last day of February, he saved his last life at the Bay: John Orland, a TV producer. Waimea Bay, and the north shore in general, has immortalized Aikau as a de facto patron saint.

The same year Orland's life was saved, 1978, an organization called the Polynesian Voyaging Society was looking for volunteers to go on a month-long, trip spanning thousands of miles. The intent was to travel along an ancient path used by Polynesian migrants between the island chains of Tahiti and Hawaii. Eddie Aikau offered his services as a member of the crew.

The vessel they used was a double-hulled canoe titled Hōkūleʻa. It left Hawaii on March 16 of that year. A leak formed, ultimately resulting in the vessel capsizing miles away from Moloka'i, the closest island. In his attempt to provide aid, Eddie Aikau paddled on his board to Lānaʻi. Eventually, the remaining crew were saved by the United States Coast Guard, Eddie Aikau's body was tragically never recovered. He had taken off his life jacket because it was getting in the way of his surfboard. The hunt to save him was the biggest search in the air or on the sea in Hawaii's history. 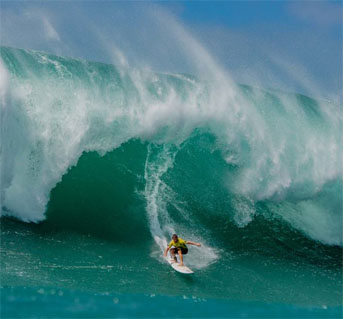 Until it was canceled in 2017, the surf-wear business provided funding for the north shore surfing tournament in Waimea Bay, with the intention of drawing attention to the sacrifice the legendary surfer made.

Some local sponsors brought the big wave invitational back in 2018-2019.

Conceived in 1985, the Eddie Aikau Big Wave event has been held a total of nine-time as a result of a prerequisite that the swells of water rise to a height of no less than 20 feet. Put another way, the height of the wave faces would reach beyond 30 feet.

The initial big wave invitational took place in 1985 at Sunset Beach. Two years after that, Eddie Aikau's younger brother Clyde took home the gold when the event switched over to Waimea Bay. The last year in which the tournament was held was 2016. It occurred in February, and the waves got up to between 30 and 50 feet. The event has only invited 28 large-wave riders for two competitive rounds. No jet skis are allowed to propel participants towards the waves, a common practice for less experienced surfers.

The Presence of Eddie Aikau in Popular Culture

Throughout the 1980s, shirts and stickers were adorned with phrases like "Eddie Would Go" throughout the world, and in particular the islands of Hawaii. Mac Simpson, a noted maritime historian, described Eddie Aikau as a phenomenal lifeguard for the North Shore, saving people in danger from swells nobody else would dream of approaching." That's actually how the phrase became popular - Eddie would go where and when no one else did. Only he was brave enough.

The saying first came into prominence in the midst of the first big wave invitational. The gigantic waves were treacherous, leading organizers to debate whether or not to continue with it. During these deliberations, a man named Mark Foo took a look at the state of the waves and proclaimed, "Eddie would go." Such a simple yet memorable saying stuck with people, as many understood its truth immediately.

Another phrase popularly attributed to Eddie Aikau is "Eddie wouldn't tow." This referred to the manner of surfing big waves in which one surfer increases the speed of another. The accelerating surfer typically uses a jet ski, while the recipient is often on a surfboard. Some controversy arose over how unnatural it was perceived to be when tow-in surfing was undertaken. The common consensus was that anything other than paddling into the wave defied the spirit of the sport.

Another version of the saying is "Eddie would throw." This is an homage to the University of Hawaii's passing attack enacted by Timmy Change and Colt Brennan, with coaching by June Jones. Additionally, another variation is "Eddie wouldn't crow", a negation of boastful, bragging surfers consumed by their egos. They even came up with "Eddie would hoe", a reference to agricultural programs stemming from Native Hawaiian culture.

Lopaka Rootz, a musical artist from Kailua-Kona, put out a reggae track called "Eddie", honoring the late surfer. It made its debut on Kapa Radio in December of 2019. Rootz' musical stylings can be found on KWXX, an FM station in Hawaii.

Full Service, a band from Austin, Texas, produced a song about Eddie Aikau labeled "In a Rescue." It's listed in "Recess", an album they launched in 2006. They played the song during the Full-Service Circus in 2013.

A former pro-surfer named Same George spearheaded an ESPN 30-for-30 documentary titled Hawaiian: The Legend of Eddie Aikau. AgiOrsi, a noted filmmaker, produced the film in October of 2013. It covered the lifeguard's life, from his upbringing to his untimely passing. It earned an Emmy for Best Sports Documentary Series and has a reputation as one of only a couple of films revolving around surfing to ever reach such lofty heights.

Comedian Kurt Braunohler respectfully gave a humorous retelling of Aikau's life in an episode of Comedy Central's Drunk History focused on Hawaiian History. It aired during the show's second season in August 2014. Aikau's story was also covered in episode 160 of Karen Kilgariff's popular podcast My Favorite Murder on February 14th, 2019.

On May 4th, 2019, Eddie Aikau was honored by a Google Doodle; it would have been his 73rd birthday.