If you've been whale watching before and were lucky enough to see a few breaching whales, you may have thought to yourself,

Why do these majestic creatures even breach at all?

Well, there are actually a few reasons that whales breach, and it's not so that you can get a Nat-Geo-style picture to post on your Instagram story.

Let's dive in and find out a bit more, shall we?

Why Do Whales Jump Out Of The Water?

Whales jump out of the water for several reasons, including: 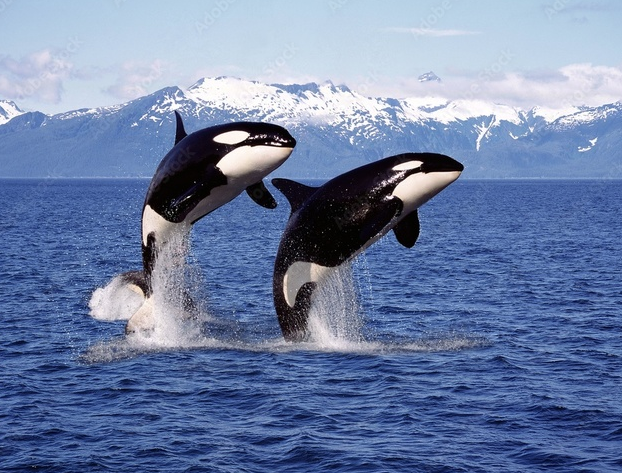 The humpback whale is one of the most studied whales around. Since we know so much about why humpback whales breach (or at least have some pretty good theories), let's focus on them for now.

Communication With Other Whales

One of the main reasons marine biologists believe humpback whales jump out of the water is to communicate a need or desire with other whales. For example, humpback whales breach far more during the mating season than they do during the feeding season, which tells scientists that they are likely breaching to express themselves to their potential mates.

A humpback whale breaching could signal danger nearby as well. When hopping far above the surface, a humpback whale could get a better view of the surrounding waters.

In many cases, humpback whales will use a method known as "spy-hopping," in which they quietly lift themselves above the water's surface to get a better look at the surrounding waters. Spy-hopping is much more subtle compared to breaching, though many whales exhibit breaching behavior simultaneously.

Lastly, many whales will use breaching to let other whales know that there is food nearby. Killer whales, for example, travel together in groups to hunt food. Breaching can also be an extremely effective technique for stunning fish, allowing a group of whales to consume them without having to chase them. If this has lead you to wondering, "what do whales eat?" we've got the perfect article for you.

Ridding Their Bodies Of Parasites

Many scientists believe whales breach to rid their bodies of unwanted parasites. Many whale species, though humpback whales, in particular, carry hundreds of pounds of parasites on their bodies that irritate their sensitive skin.

These parasites, including large barnacles and small crustaceans known as "whale lice," cover the entire body of a whale. All of this extra weight adds up, which is why whales try to get rid of them by breaching.

Barnacles are particularly annoying, as they often cluster up around a whale's flippers, tail, chin, and belly. 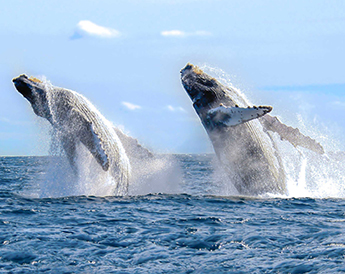 Researchers believe that the incredible force of a whale hitting the water removes these annoying parasites. The barnacles you're used to seeing pop up in tidepools are very different from those found on a whale's body.

The barnacles will grow and transform, securing themselves to the whale's body to use its cirri to catch flowing food. Generally, a whale-barnacle relationship is pretty harmless. A barnacle won't harm a whale, though if too many of them appear, they can start to drag the whale down.

When a massive humpback whale flies out of the water and comes down with 80,000 pounds of force onto the water, you don't want to be the baitfish that gets in the way.

For whales, stunning these baitfish or slowing them down makes them much easier to catch and eat.

As a Form of Exercise 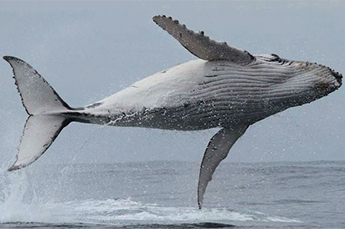 A new theory recently came out that whales breach to get exercise.

In a recent study, young whales were observed repeatedly breaching out of the water.

This study hypothesized that the whales were breaching to build up myoglobin in their muscles.

Because whales are mammals and have no gills, myoglobin is extremally important. It carries oxygen in their muscle tissue, helping them retain oxygen as they dive down deep beneath the surface.

This theory is still relatively new, though some researchers believe whales might breach to help food move more swiftly through their digestive systems. During a regular day in feeding season, your average humpback whale will consume next to one ton of fish, which is about 2,000 pounds!

In short, your average whale can consume more than a million calories in 24 hours.

Many researchers believe that this common method of hopping out of the water allows them to send food through their digestive system with more help. It's the same idea as if you were to take a nice stroll after eating a massive plate of pasta.

Many researchers believe that whales breach for fun or as a form of play. For example, young whales get excited during mating season and love hopping around out of the water to show off their skills.

From whale watchers to Carnival cruisers to researchers and beyond, there are so many people out there who agree that these amazing animals have spirit. It's clear that these animals enjoy their lives and use breaching as a form of expression and excitement.

Why Do Whales Breach Near Boats?

If you've ever been on one of those whale watching tours and saw a whale breach nearby, it may have been because the whale wanted to get a better look at your boat. Researchers believe that whales use breaching to better look at their surroundings.

Whales are likely to breach if they hear a loud noise or notice a lot of surface activity, as they are curious animals and like to have an idea of what's going on. By getting a better look at boats or other similar surroundings, they can better navigate the ocean.

Do Any Other Aquatic Animals Breach?

According to marine wildlife studies, the whale is not the only creature in the sea that breaches.

Dolphins and sharks are well-known breachers, and so are many rays. If you've spent a fair amount of time in deep waters, you've likely seen some fish breach as well!

Whale That's About It

Though the field of marine mammal science is growing at a rapid pace, we're still not 100% sure why the whale species love to soar above the ocean's surface. As of now, we only have a few hypotheses with slight evidence to support each.

What we do know is that watching one of these magnificent creatures soar out of the water is a once-in-a-lifetime experience and those that get to witness it are quite lucky!