When Are The Highest Tides

Are you visiting the beach? Do you know when the highest tide is? You don't want to get cut off from the land as the sea levels rise. This could end in disaster.

The rotation of the earth along with the gravitational pull of the Sun and Moon results in tides. High tides are a result of ocean waters being pulled towards the Moon. High tides happen twice a day with more extreme high and low tides occurring a couple of times a month.

Come with us to learn all about why tides happen and when the highest tides occur.

What Causes Tides On Earth?

The oceans on Earth bulge and dip as the moon orbits the Earth. This bulge of sea results in tides. A high tide is created when the gravitational pull of the Moon causes the sea to bulge towards the Moon. Two tidal bulges happen so there are two high tides. 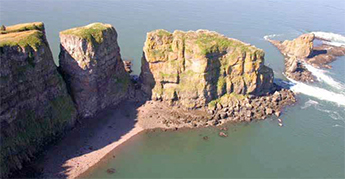 Fishing and surfing conditions are shaped by tides. Most coastal areas experience two high and two low tides each day whereas some areas only experience one high and one low tide each day. Tide clocks and tide watches assist with knowing when the tide is on its way out, or on its way in.

When Are Tides In Ea​​​​rth's Oceans The Highest?

The Earth rotates on its axis and the Moon rotates around the Earth, and they both orbit the Sun. This means extremes of low and high tides will occur in different locations at different times during the lunar month and also calendar year.

The changing position of the Moon relative to the Earth and Sun results in extreme tides at certain times during the month, for example, when the moon appears full or during a new moon.

A spring tide occurs when the Earth, Sun, and Moon are lined up.

This happens twice each lunar month, during a new and full moon.

The Sun and the Moon's gravity force pulls on the tidal bulges on the Earth's surface, resulting in an extremely high tide, a spring tide. The highest spring tide is known as a king tide.

More extreme tides called neap tides are tides that are much lower than normal. Like the highest spring tides, they happen two times a lunar month, but neap tides occur during the first quarter moon and last quarter moon.

The Moon and Sun are at right angles to one another so their gravitational forces are opposing resulting in these very low tides, or neap tides. 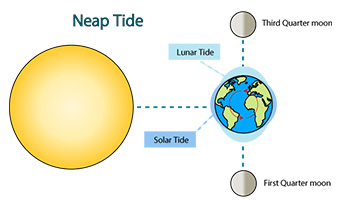 What Part Of The Globe Gets The Highest Tides? 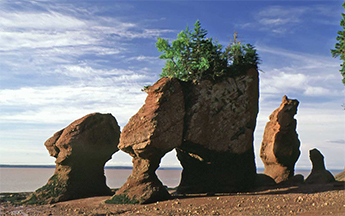 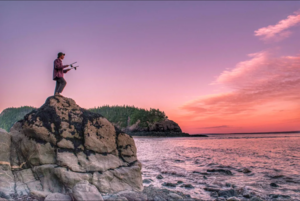 The Bay of Fundy, which is located between Nova Scotia and New Brunswick in Canada, experiences the highest tides in the world. The average change in sea levels between a high and low tide on Earth is around 3 feet but this can reach over 50 feet in the Bay of Fundy. Burntcoat Head Park in the Minas Basin area, which is the top part of the Bay of Fundy, has experienced a tidal range of 53 feet.

There are two high tides every day on the Atlantic Ocean coastline. The tidal range on the Atlantic Ocean coast side of Nova Scotia is between 4 feet and 8 feet, and there is little variation in the times of the high and low tides. On the opposite coast of Nova Scotia, the waters of the Bay of Fundy experience one of the largest tidal ranges in the world.

Why Are The Tidal Ranges So Large In The Bay Of Fundy?

Bay of Fundy tides are so high because of specific conditions in the bay, in particular, the depth and funnel-like shape of the bay.

The water in the bay has a specific period of oscillation and will flow back and forth in the bay in a rhythmical manner similar to water sloshing in a bath. Since the bay is extremely large, it takes about 12 hours for one complete oscillation to occur. At the same time, the ocean tide also floods the bay about every 12 hours resulting in amplification of the oscillation and very high tides with a large difference in the tidal ranges near the head of the bay, for example in the Minas Basin and Burntcoat Head Park.

The funnel shape of the bay also affects the tides. The bay is shallower and narrower toward the head of the bay which results in water being forced farther up the shore.

With the highest tide in the world and rugged natural beauty, the Bay of Fundy attracts many tourists each year. It also experiences some interesting tidal phenomena due to the sheer volume of water coursing in and out of the bay.

There is the second biggest whirlpool in the world, called the 'Old Sow' and the rapids on the Saint John River called the 'Reversing Falls' which change direction with each tide. The Hopewell Rocks are islands during high tide and a beach with caves to explore at low tide and in daylight hours.

There is also a rare occurrence called a tidal bore which is when the incoming tide forms a wave that moves upstream in a narrow bay or river, against the current.