What Is A Red Tide

Due to its striking deep brown or red color, it is hard to miss the unique phenomenon known as "red tide" if you find yourself along the marine coast during certain times. This special type of algal bloom is toxic and can be found in oceans around the globe.

But just what IS red tide, and how does it occur?

Come dive in deep with us as we explore the beauty and danger of what is known as a "harmful algal bloom".

Mother nature creates red tides naturally when a very particular type of algae (a plant-like organism that lives in the ocean) grows beyond its standard capabilities. People call it "red tide" because of the reddish overgrowth that appears through the water's surface.

However, chemicals from several manmade processes, including sewage, factories, farming, and water treatment plants, all have a hand in creating red tide as well. The runoff from these various processes dissolves into the land's water, makes its way towards the ocean from rivers and streams, and causes red tide blooms the unnatural way. 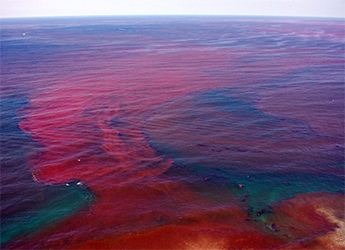 How Long Does Red Tide Last

Red tides can last a few weeks, or in some cases, remain visible for over a year. Many red tides will subside before reappearing again.

Florida red tides are very common, and the duration of these red tides depends on several variables, including biological, chemical, physical, and ecological factors.

The direction of the water currents also impact how long red tides last.

Swimming In Red Tide: Should I Do It?

For most people, swimming in "harmful algal blooms" during red tide is completely fine. However, many report that red tides burn their eyes and cause skin irritation.

In many cases, these harmful algal blooms cause respiratory irritation for those with preconditions. Therefore, those who are typically susceptible to irritation from plant products should avoid swimming during red tides, and if you notice dead fish - you should get out of the water immediately.

It is also worth noting that red tide toxins are able to move in the air for up to a mile, meaning that even if you are not right on the shoreline, you can still be impacted.

When the concentration of algal blooms is high, the water can take on a red, rust-like color. Sometimes, a red tide bloom will have a slight green tint. However, there are times when red tide does not create any color at all. Plankton algae blooms are what create bioluminescent waves.

Why Are Red Tides Dangerous?

Red tides can be dangerous for humans and marine organisms because of the toxic algae and chemicals it produces. K. Brevis, a Florida red tide organism, produces a unique Florida red tide toxin that can kill fish and other marine life because it impacts the central nervous system.

Is It Safe To Eat Fish During Red Tide? 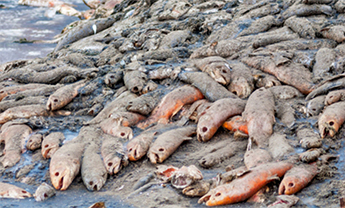 People who consume dead fish, oysters, and clams during red tide can be at risk of neurotoxic shellfish poisoning as well if those fish are not adequately monitored and maintained.

If you recreationally harvest Florida fish during a red tide, you should not eat it.

Do Red Tides Occur All Over The World?

Red tide algal blooms occur around the globe, though K. Brevis, the prevalent organism that is the cause of Florida's red tide, is only found in the Gulf of Mexico.

As winds and currents pick up, red tides off Florida's gulf coast often move into the Gulf of Mexico, causing new red tide blooms to pop up.

Does Red Tide Happen In Fresh Water Too?

While you can find red tides in estuaries and bays, you will not find them in any freshwater bodies beyond coastal waters. This is because the species that cause red tide find it difficult to survive in waters with little salinity. You can learn more about the chemical composition of sea water here.

However, other types of harmful algal blooms are found in lakes and rivers, though they are usually a blue-green color.

Can Occurrence Of Red Tide Be Predicted?

While it is still not possible to predict the occurrence of red tides, marine biologists can detect how it will move based on current wind and water data collected via ocean buoys.