With so many different families and habitats around the world, the whale diet is quite diverse. Every species has its own favorite foods. Regardless of where they live and what they like to feed on, they are almost always hunting for their next delicious meal.

Come dive in with us as we find out more!

If you've ever been curious as to what the world's largest mammals like to dine on, you might be surprised to find out that most whales don't prefer eating large prey. In fact, baleen whales, the largest whales in the ocean, prefer feeding on some of the smallest organisms, including krill or plankton, which drift around in their local waters.

Of course, not ALL whales eat plankton. Toothed whales, such as sperm whales, enjoy much larger animals, like the giant squid.

While sharks are not the main source of food for any whale, sperm whales have been seen hunting mako sharks, and have been found with the remnants of blue sharks, deepwater sharks and basking sharks in their stomachs.

While orcas, also known as killer whales are commonly thought of as whales, they are actually classified as dolphins. Killer whales regularly hunt and eats sharks.

Killer whales are highly intelligent, have very organized social structures and some hunt in larger groups. 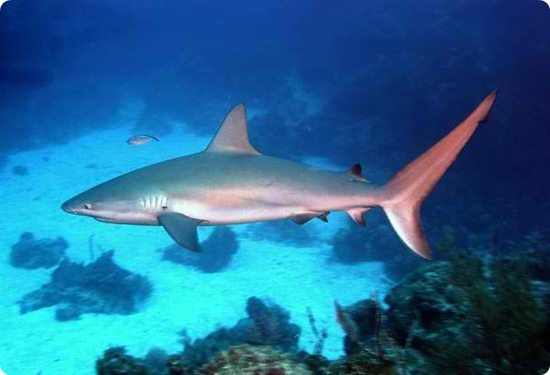 While many people think of the great white shark as the lion of the ocean (aka the apex predator), that title truly belongs to the killer whale species.

Scientists have observed killer whales attack sharks using a unique "karate chop" technique, in which they force a shark to the water's surface before slamming their massive tails down on its head to stun it. Once stunned, a killer whale will flip the shark over so it becomes incapacitated. Then, once the shark is immobile, the killer whale can finish it off.

There are a few reasons why other toothed whale species don't eat sharks. For starters, most of their teeth aren't designed for chewing through hard cartilage. Beyond that, attacking sharks is risky. Most toothed whales would rather hunt for species that can't attack back or put up a good fight.

Lastly, many whale species have narrow throats, meaning they would have difficulty swallowing a shark even if they wanted to. For example, the throat of a blue whale, the most enormous creature in the world, isn't even a foot wide.

Of course, you could also say it's a matter of taste. For so many generations, most whales decided not to eat sharks. Because sharks aren't a normal part of the whale diet, they could cause pain or other digestive issues. However, this is simply a hypothesis, and no science tells us whether or not whales have preferential digestive systems.

While many people think whales only feed on small crustaceans such as krill, or microscopic organisms such as plankton, there are plenty of whales that enjoy eating fish as well! For example, the sperm whale, which is the largest toothed whale out there, loves to eat fish, and will often eat larger creatures as well, such as octopus and squid.

What Do Toothed Whales Eat? 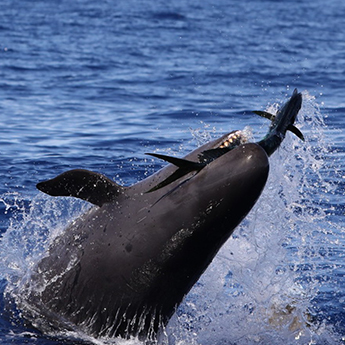 Toothed whales, as you may have guessed, have teeth. Many scientists refer to these toothed whale species as active hunters.

Toothed whales eat far larger prey than that of the baleen whale species, including octopus, squid, fish, and several types of crustaceans.

Killer whales, which are actually dolphins, hunt in large packs, eating a wide variety of food, including sharks, seals, walruses, sea lions, squid, and fish. Because they don't have any predators, scientists consider them the top of the food chain.

FUN FACT: Orcas are incredibly social creatures, traveling in pods for most of their lives. They rarely separate from each other unless they go out to search for food.

Sperm whales, the largest toothed whales, love eating fish, giant squid, and octopuses. You'll often find these massive whales thousands of feet beneath the water's surface, submerged for more than an hour as they hunt for food. Scientists estimate that sperm whales consume more than 220 billion pounds of squid every year!

Here's an overview of the toothed whale diet:

What Do Baleen Whales Eat?

As you may have guessed based on their name, Baleen whales have baleen in place of teeth. Baleen whales include gray whales, right whales, blue whales, rorquals, and more. Baleen is similar to a human fingernail in that it is made up of keratin. These hardened keratin plates hang down from the top portion of the whale's jaw, fraying softly near the ends to help filter food through.

You will find small spaces between these keratin plates, which provide just enough room for water to filter through, though they are too small to allow plankton or fish to escape.

Baleen whales often eat what is closest to them, meaning their diets depend on the food available in their habitat. The way that baleen whales locate prey varies based on location and species. 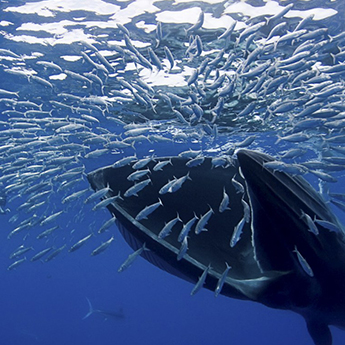 The way baleen whales feed is by simply opening their mouths when swimming towards prey, allowing them to capture these microscopic organisms between their baleen bristles. Then they allow the water to filter out of their mouth and swallow.

Most of these whales eat krill, plankton, or fish in the nutrient-rich parts of their environment. However, some whales skim the water's surface with their mouths open to catch prey.

Some baleen whales use a technique where several of their own species gather together and circle around a school of fish, blowing bubbles at their underside so that the fish are forced towards the surface where they can be caught.

While many baleen whales feed on very tiny animals, some, such as humpback whales and Bryde's whales, feed on fish like anchovies and herring.

Many scientists agree that large baleen whales eat up to 4% of their body weight every single day. During the feeding season, the amount that whales eat exceeds what their bodies require. For this reason, whales will often store excess energy as blubber.

Here's a small overview of the baleen whale diet:

Gray whales may be one of the most interesting baleen whales, as they are consistent bottom feeders.

To catch prey, they will swim near the seafloor and roll quickly onto their sides to lift sea sediment. Within this sediment, small creatures arise, including plankton, larvae, crabs, and small fish, which the whale will then feast on.

They will often swim into the water column during their migration period to catch swimming prey.

Gray whales often eat more than 3,000 pounds of food each day! As a result, they will often gain anywhere from 16%-30% of their total body weight during the feeding season.

FUN FACT: It appears that most gray whales are "right-handed," meaning they roll onto the right side when they feed.

Then you have the unique hunting techniques of humpback whales, who use lunge netting, also called bubble netting to capture their prey. Lunge netting requires a group of humpback whales, some of which will swim around a school of fish while blowing bubbles to gather them up, while other whales will create loud noises to startle them, sending them scurrying to the water's surface.

After the fish move to the surface, these large baleen whales will swim up quickly with their mouths open to catch as much as they can!

The Diet of the Great Blue Whale 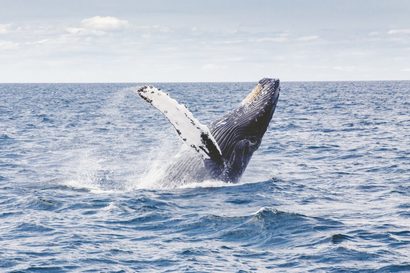 Wondering what the diet of the world's largest sea creature consists of?

Blue whales are MASSIVE, often growing to almost 100 feet in length and weighing nearly 200 tons! So yea, they need to eat quite a bit of food to maintain their size. And that exactly why they took the #1 spot on our largest whales list.

Though they are so large, they almost exclusively feed on tiny crustaceans called krill.

Luckily, krill is plentiful. They are found in giant swarms all over the ocean, some swarms with more than 40,000 individual krill in one cubic meter!

And, as you may have guessed, the blue whale has the largest appetite of any animal out there. Blue whales feed on more than four tons of krill each day!

With their large baleen plates, they will take in giant mouthfuls of food and water before pushing the water back out through their baleen plates and keeping the food in their mouths.

So, as you can see, different species of whales eat different things. They eat just about everything from giant squid to tiny krill and plankton, using different hunting methods to catch their prey.

The type of food that these large marine animals consume depends on several factors, including climate, location, social structure, and available marine life.

Those species lucky enough to be equipped with echolocation have a much easier time finding their food. The whales' echolocation measures density, location, and distance, in the same way our modern-day submarines navigate the ocean.

The good thing is, whales don't have a taste for humans!

Are There Sharks In The Great Lakes
January 4, 2022