With so many shark species on the planet, every shark has a slightly different eating habits. The majority of sharks are wild predators, feeding on other ocean creatures. However, some sharks out there prefer a readily available batch of plankton instead.

Sharks do whatever it takes to adapt and survive, and they certainly aren't picky eaters. In this article, we're going to break down what sharks eat! 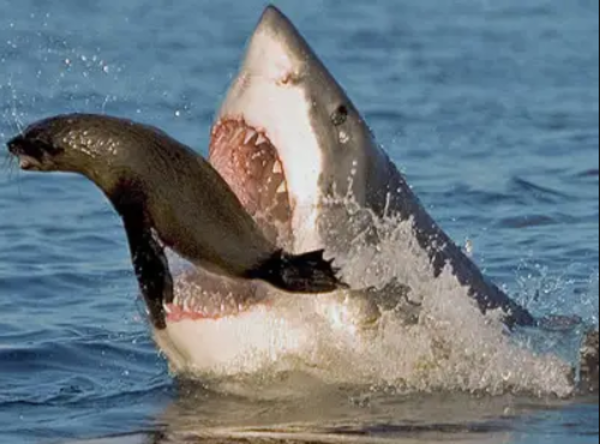 What Do Great White Sharks Eat?

A great white shark's favorite food is larger marine mammals, and they will eat them in one single gulp. They often consume dolphins, porpoises, sea birds, sea lions, seals, and fish such as tuna or mackerel. Great whites are known to eat other sharks as well.

As opportunistic hunters, there's not much they'll turn down.

What Do Most Sharks Eat?

Most sharks are carnivores, meaning their diets consist of live prey, including fish, crustaceans, and mollusks. However, larger shark species like to eat large marine mammals and large fish species, including dolphins, sea lions, tuna, mackerel, and seals. Some even like to dine on smaller shark species!

With that said, there are sharks out there that are a bit pickier when it comes to the food they eat. 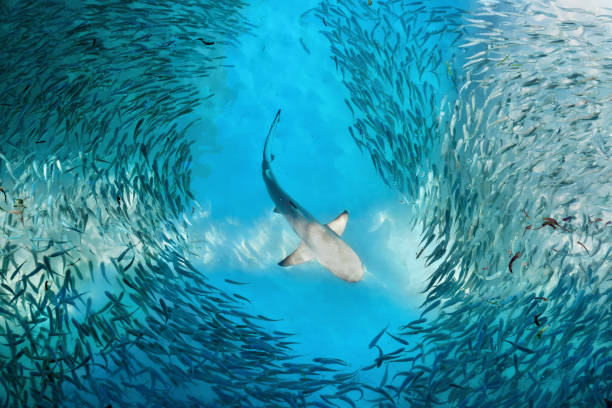 These species include hammerhead sharks and tiger sharks, both of which rightfully earned their places on our most dangerous & aggressive sharks list . While these two are both carnivorous, hammerheads like to eat rays, and tiger sharks love to eat blue sea turtles.

Blue sharks are quite interesting as well, as they prefer to eat squid. Other sharks, such as benthic sharks, only eat crustaceans.

Carnivorous sharks are skilled hunters, to say the least. When different sharks catch prey, they do so with varying strategies. Large shark species will swallow animals whole or use their mighty jaws to tear them apart. Smaller sharks have to be much more strategic about how they hunt their prey.

Carnivorous sharks use their sharp teeth to cut the flesh of their prey and pierce their bones. Some sharks have smooth teeth, while others have serrated teeth, which they can either use to crush or cut their victims depending on their needs. The tiger shark, for example, has teeth with jagged edges that it uses to bust open hard-bodied crustaceans.

Some smaller species of sharks hunt in packs, as they don't need large volumes of food compared to certain shark species.

FUN FACT: Thresher sharks may just have the most interesting way of hunting. This large species uses its the lobe of it's tail (or caudal fin) to corral large schools of fish.

Are There Non-Carnivorous Sharks?

Yes. Some sharks are planktivores, passively feeding on plankton or other microscopic sea creatures. It is often assumed that all sharks have the typical carnivorous diet that involves ripping larger animals to shreds, but it is not so.

The basking shark has a giant mouth, and efficient gills in which it can filter more than 2,000 tons of water in one hour to collect plankton. This species can eat hundreds of pounds of these tiny marine drifters per day.

How Much Do Sharks Eat?

How much a shark eats depends on the type of shark. For example, it might seem obvious that the eating habits of a 60-foot whale shark are much different than that of an 8" dogfish shark.

There are shark species that will eat a single large meal in one day and store it away, so they don't have to eat again for a few weeks. When they do eat, these sharks store a unique oil in their liver, which eliminates their instinct to hunt for more food.

Because sharks are cold-blooded animals, they don't have to eat as much. With cold blood, they have slower circulation than humans, meaning they burn energy much slower.

Shark digestive systems are different from other mammals in that they are incredibly slow. They have very short intestines and a spiral valve that sits within a short section of their stomach. As food passes from their mouths into their stomachs, it gets stored in the last portion of their digestive tracks. If the shark feels that the food it ingested was bad, it will expel the food through its mouth.

While we like to think of sharks as fearless predators, it is rare that they attack humans, and even rarer that they will eat one. A carnivorous shark may attack a human if the shark gets confused, curious, or scared, but they usually stick to fish and sea mammals.

Sharks are considered some of the most dangerous sea creatures because of their poor eyesight.  Humans typically get bitten by sharks because the shark has mistaken them for a seal or sea lion, and once realizing they've made a mistake, sharks generally leave humans alone after the first bite.

So, Who Eats Sharks? 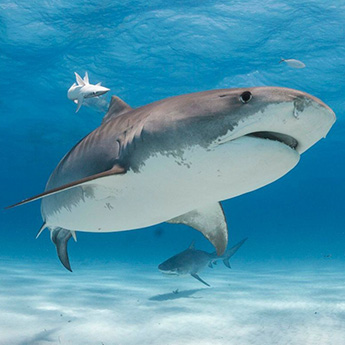 When it comes to the hierarchy of food in the ocean, sharks are typically at the top. However, even the fiercest great white sharks in the ocean can't live completely without fear.

Killer whales, weighing around five tons on average, can and have eaten great whites.

Younger sharks are often prey for seals, crocodiles, and other large sharks.

Of course, the most threatening predator for sharks is humans. As the years have gone on, shark meat has become a more and more popular source of food. Plus, many manufacturers have begun using shark cartilage in pharmaceuticals.

In 2007 alone, 4,160 tons of shark was exported out of the United States. Find out more in our "How Many Sharks Are Killed A Year" article.

However, nowadays, the practice of fishing for shark fins (cutting off a shark's fins before tossing it back into the ocean) has been banned in the U.S., Australia, New Zealand, Canada, and South Africa.

Final Thoughts - The Diet At The Top Of The Food Chain

Well, as you can see, sharks are all about variety when it comes to their diets. Because sharks are at the top of the food chain, the way they eat plays a VERY important role in how the ocean regulates its species. If sharks were to go extinct, for example, the ocean's octopus population would grow out of control, far more lobsters would be hunted by the octopus, meaning fewer lobsters in the sea. And the domino effect would continue down the line.

Beyond that, the hunting habits of sharks help perpetuate the survival of the fittest in the ocean. In order to conserve energy, a shark will most often target weak or sickly mammals and fish. Essentially, they weed out vulnerable sea creatures while keeping other much healthier animals alive.

While the vast majority of sharks are meat eaters, there are a few planktivore species. For many millennia, our ocean's sharks have evolved and adapted to the food available, allowing them to thrive and reproduce no matter the environment.