What Do Jellyfish Eat

The jellyfish is one of the ocean's most fascinating and unique specimens. With strange, bell-shaped bodies and a jaw-dropping luminescent glow, it's hard to believe that these sea creatures are of this world.

Though there are so many questions one could ask about the curious jellyfish species, we're here to answer one of the most popular:

What do jellyfish eat?

Come dive in with us to learn more about the diet of the Jellyfish species.

What Do Jellyfish Eat In The Ocean?

Though it might seem hard to believe, Jellyfish are carnivorous sea creatures, meaning they love to feast on other animals.

The jellyfish will eat just about anything that it floats into, making it what scientists call an "opportunistic predator."

While jellyfish certainly aren't picky about what they eat, a jellyfish's diet depends on how large it is.

​Some jellyfish even eat other jellyfish!

However, smaller jellyfish, some of which are as small as a pinhead, can only feed the tiniest sea creatures, called plankton. 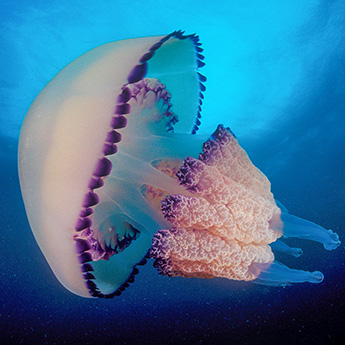 Beyond the typical species of jellyfish, there are a few unique exceptions. For example, the spotted jellyfish will raise algae inside its stomach. It will then use this alga to photosynthesize and deliver nutrients to the rest of its body.

We also know that many species of jellyfish are quite voracious when they eat. As a result, they are seen looking for prey in blooms. A jellyfish bloom is a congregation of jellyfish that can grow into the millions. In some cases, jellyfish blooms can devour so much food that entire fisheries disappear, leaving behind very little for humans to eat.

Ocean experts believe that the occurrence of blooms will skyrocket in the near future due to climate change, which could end up decimating the ocean's ecosystems.

How Do Jellyfish Eat?

How in the world does a sea creature that doesn't have a brain, a heart, or any bones eat other creatures?

Well, the answer depends on what life stage the jellyfish is in. It may seem strange, but the jellyfish's body can change radically throughout its life. Scientists often split the life of a jellyfish into four parts. In certain periods of its life, a jellyfish is sexual, while in other phases, it goes through asexual production. Throughout these different parts of their lives, jellyfish undergo incredible transformations.

The four stages of the jellyfish include:

The larva stage is the first stage when the jellyfish comes out of the egg and sperm of its parents. The larva will search for a surface to settle down on so it can continue developing. During this stage, it will become a sedentary polyp or baby jellyfish.

From there, the sedentary polyp will bud off into an ephyra, or a free-swimming jellyfish clone. These clones will continue living until they reach the adult jellyfish stage, otherwise known as the "medusa" stage. Interestingly, adult jellyfish only live long enough to reproduce.

The longest jellyfish stage is the polyp stage, in which the jellyfish remains for a few years while it continues to mature. During the polyp stage, the jellyfish will develop a digestive system. However, because these small jellyfish are still stuck to rocks during this stage, they have no way to get out and capture food. That is why we refer to them as passive predators during this stage, as they can only seize on organic matter or other tiny organisms that float by them.

Once the baby jellyfish reaches its adult stage, it becomes mobile, changing its eating habits. It will usually float passively through the water, letting the current move it.

Scientists have long studied the unique digestive system of the adult jellyfish species, which helps them to devour other animals. You'll find long tentacles on the jellyfish body, which scientists refer to as oral arms.

They use their oral arms to capture their prey. In addition, some jellyfish have tentacles with toxic venom that they use to murder their prey before eating.

However, because their muscular and neurological systems are quite limited, they don't maneuver or swim around to catch their prey. Jellyfish are not very good swimmers. Rather, they will spread their big tentacles to collect small fish, crabs, brine shrimp, or other jellyfish that pass them by.

How Do Jellyfish Digest Food 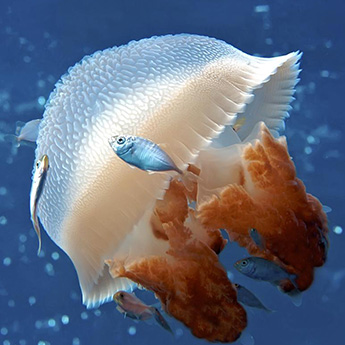 While the anatomy of a jellyfish might seem quite simple, similar to other animals, they have a normal digestive system. Once they kill or paralyze their prey with their tentacle stinging cells, many jellyfish will move their catch towards their mouth.

The mouth is located at the underside of a jellyfish's bell-shaped body, and it is pretty small. So the minute the food enters the jellyfish's mouth, it will end up in its stomach.

With the use of the coelenteron, very similar to the intestines in the human's stomach, jellyfish digest food with ease. Within the coelenteron are unique enzymes that allow the jellyfish to digest its food. Once digested through the stomach's cells, the body will reject it.

The overall process is incredibly efficient, as it's not possible for a jellyfish to eat once again until it has expelled the food inside its body. So even after 600 million years of evolution, the jellyfish is still able to thrive and discard waste without digestive organs like the liver and intestines.

Yes, humans can eat jellyfish. With that said, you won't find jellyfish on the menu at your average restaurants, as they're primarily available in luxury restaurants in eastern countries. People eat jellyfish in countries like Thailand, China, and Japan. Before eating a jellyfish, humans will dry it out and package it before exporting it.

Jellyfish can be found all around the world's oceans. Though jellyfish are predators in many ways, they are also the prey of larger animals, including:

What Do Pet Jellyfish Eat?

Sea jellies eat just about any type of small, planktonic larvae that float by. However, most aquarium bound jellyfish love to eat baby brine shrimp.