With more than 40 dolphin species around the world living in a wide variety of environments, including deep-sea oceans, coastal water, estuaries, and freshwater rivers, the dolphin diet ranges quite a bit.

Many scientists refer to dolphins as opportunistic feeders, meaning they eat what they can find around their homes. For example, a dolphin living in the deep ocean would likely eat jellyfish and squid.

So, what do dolphins eat?

Come dive in with us as we explore the diets of these fascinating marine mammals.

Yes, dolphins are carnivores. Though they might look adorable, these ferocious and wild animals eat other live creatures, including crabs, small fish, squid, octopus and other cephalopods, jellyfish, and crustaceans such as shrimp. Larger dolphins will consume larger fish, sea turtles, sea lions, and seals.

What Fish Do Dolphins Eat?

As we know, dolphins eat fish. But the kinds of fish that dolphins eat depends significantly on where they live and what is available in their habitat.

A dolphin's diet is flexible depending on where they are located, and their feeding habits reflect the food available.

For example, you can find bottlenose dolphins all over the world in both tropical and temperate seas. The types of fish they consume depend on where they are and the time of year.

A bottlenose dolphin living in the colder waters off the coast of Scotland, for example, would probably enjoy eating salmon when these fish appear during the spring and summer. However, salmon become much harder to find as the season slowly drifts into winter. 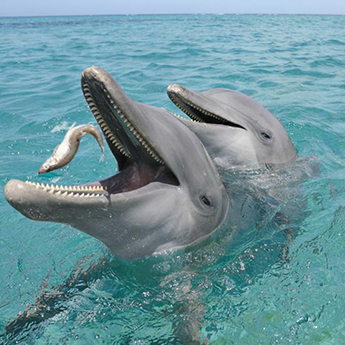 These same bottlenose dolphins will then adapt their diet, hunting mackerel or herring instead. Bottlenose dolphins living in tropical waters might hunt for catfish and mullet.  Other fish include sawfish and cod.

FUN FACT: While all dolphins have teeth, they don't use their teeth to chew their food. Instead, they will grab what they want with one hefty bite before swallowing their prey whole.

How Much Do Dolphins Eat?

The amount of food that a dolphin needs to eat depends on the type of fish it hunts. If we look at herring or mackerel, which have plenty of fat, they provide far more sustainability in smaller doses, so the dolphin may not need to eat as much. However, dolphins who eat squids primarily will need to eat more to maintain their body weight, as squids contain very little fat.

On average, dolphins that weigh between 400 and 500 pounds must consume about 30-50 pounds of food each day.

How Do Dolphins Hunt? 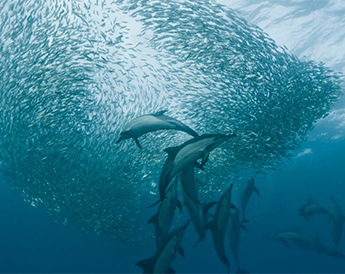 Dolphins are pod hunters, though they use different hunting techniques depending on the species.

Here are the most popular ways in which dolphins hunt:

How Many Stomachs Do Dolphins Have?

Dolphins have three stomachs, which allow their aquatic digestive systems to function in the most efficient way possible.

How Long Can Dolphins Hold Their Breath?

Dolphins can hold their breath for about 8-10 minutes on average.

You might ask, then, how in the world does a dolphin catch any shut-eye?

While asleep, a dolphin will only shut one eye, keeping only half of its brain working while the other one nods off. They will do this with either eye. Many dolphins will often do this every two hours, amounting to around eight hours of sleep throughout the day.

How Do Dolphins Drink Water?

Dolphins don't need to drink water, as they get plenty of water from the prey they feed on. Mainly, dolphins eat squid and fish, which contain tons of water. Unlike humans, dolphins don't sweat, so they don't lose that much water.

If you're not quite done learning about the dolphin species yet, our other dolphin articles include: