Reptiles were the rulers of the Earth for millions of years before humans arrived. The massive reptiles found on land were known as "dinosaurs." The proper term for those that lived semiaquatic and fully aquatic lives is "marine reptile". It is marine reptiles who made the world's oceans incredibly dangerous in the prehistoric days.

Many marine reptiles were the size of schools buses and could swim very fast. Today, we're going to explore the ins and outs of some of these extinct aquatic creatures.

If you watch Jurassic World, you can see some of these remarkable sea creatures make their appearances. The Mosasaurus species was seen chomping down a great white shark during the film, and pulling the massive T-Rex into the water at the end of the film.

Unfortunately, mosasaurs went extinct more than 65.5 million years ago during the same mass extinction that killed off the dinosaur population. But, according to the Philip J. Currie Dinosaur Museum, the Mosasaurus species is one of the most prominent members of this dinosaur family.

One of the largest ocean species ever found grew to 56 feet long during its life. However, not every mosasaur was that giant. Many of them were only the size of an average porpoise. Even with that said, many people refer to them as the T-Rex of the seas.

Uniquely enough, mosasaur fossils are often found with the content of their stomachs intact. Because of this incredible preservation, paleontologists are able to gather more information on their hunting strategies and diets.

Scientists also know that these creatures evolved to have shark-like tails, allowing them to propel themselves quickly through the water. The tail eventually progressed further, allowing them to use powerful breaststrokes with sudden bursts of speed.

While movies like Jurassic Park and Jurassic World give us a bit of insight into how these "swimming dinosaurs" lived, they don't provide us with all the facts. So let's look at a few things you might not be aware of when it comes to the prehistoric marine reptile world.

The word "dinosaur" has a very particular definition. When we talk about dinosaurs, we are talking about animals that have limbs and live/hunt on land. Though some dinosaurs were able to swim - like humans, their lives in the sea were temporary at most.

Instead of referring to swimming reptiles as dinosaurs, they're actually called marine reptiles, or aquatic reptiles. Some of these were similar to the crocodiles we have today, in that they had limbs on their bodies and spent most of their time in the water. Others looked more like dolphins and sharks, had fins, and spent the entirety of their lives underwater.

Both types roamed the Earth simultaneously, co-existing together. 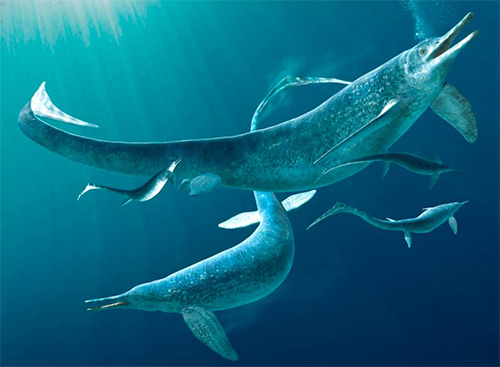 Ichthyosaur is the Greek term for "fish lizard." These unique swimming reptiles had fish-like bodies, and many of them grew anywhere from 10 to 40 feet in length. Few species survived the mass extinction around 252 million years ago, then had to evolve to better fit in with new environmental conditions.

Many of these "swimming dinosaurs" lived in coastal waters at continental edges, though some of them lived far from the edges of the land in the open ocean.

Similar to today's porpoises and whales, the Ichthyosaur gave birth to their babies at sea.

Plesiosaurs swam throughout the seas from around 65 to 200 million years ago.

These massive, carnivorous reptiles loved to eat weak sea creatures, such as Ichthyosaurs. In terms of looks, the plesiosaurs were known for their short tails and long necks.

Due to their unique broad bodies, short tails, and flippers, the plesiosaur flapped its arms to move about in the water, very similar to the way sea lions move around today.

However, even with its long neck, it only ranged from around 8 to 46 feet long. 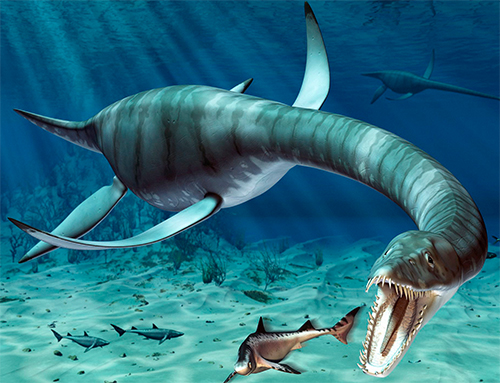 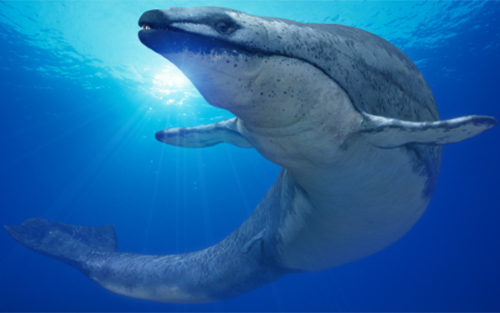 The Basilosaurus is a type of ancient whale species that could grow anywhere from 50 to 80 feet long and had sharp teeth, unlike today's sperm whales. The Basilosaurus usually dined on large fish, small whales, or other types of prey that other predators couldn't feed on.

Even though the Basilosaurus was one of the largest predators in the ocean, many studies have shown that its movements were quite restricted. Unlike today's whales, the Basilosaurus could not use echolocation to send out environmental calls.

At just over 15 feet long, the Helicoprion had many shark-like features.

Many consider this one of the most dangerous marine reptiles due to their ultra-sharp, razor like teeth.

Researchers aren't quite sure about how their teeth functioned, though it is widely believed that these teeth rotated backward when consuming prey, similar to a saw.

If there ever were a real-life sea monster, the Helicoprion would be it! 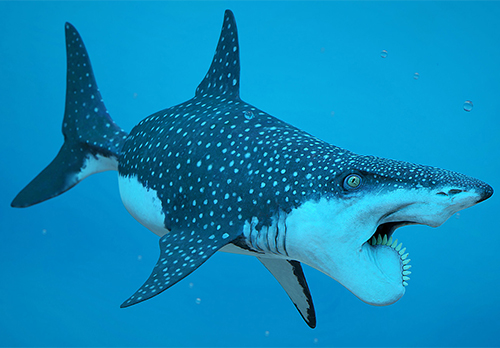 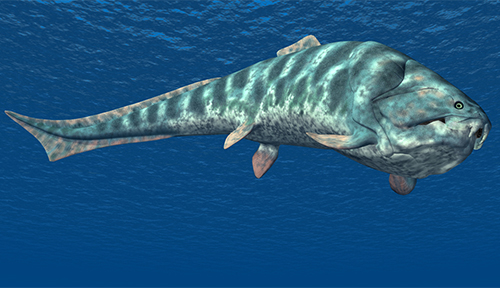 The Dunkelosteus was a massive fish that could grow well up to 30 feet in length. Many researchers compare this huge fish to a tank. Instead of using its teeth, this unique fish would use its 8,000-pound-per-square-inch toothless bite and the bony ridges on its body to devour its prey.

With all of the evidence collected, researchers assume that it could open its mouth as fast as one-fiftieth of a second, sucking prey into its mouth like a vacuum.

Thanks to their incredibly sharp ridges, the Dunkleosteus could easily smash through the bodies of other armored fish with bony bodies.

Because the armored skull is the only thing left of Dunkleosteus fossils, scientists could only make an educated guess as to what these animals looked like while they were living. However, we do know that this creature had a wildly strong head that complemented its extreme bite. 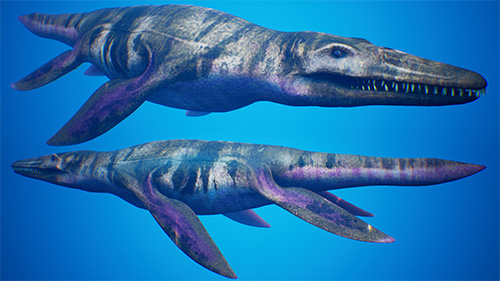 With pear-shaped bodies, short necks, and large heads, the pliosaur was one of the scariest marine reptiles in the ocean during the Jurassic era.

With such a large head and massive teeth, many believe that the bite of a pliosaur was four times stronger than that of a Tyrannosaurus rex.

Nothosaurs were very similar to today's crocodiles in that they had short legs, long, flat tails, and extremely sharp teeth.

They lived during the Triassic Period and were the very first large ocean reptiles. 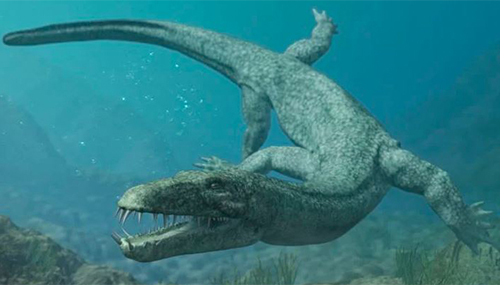 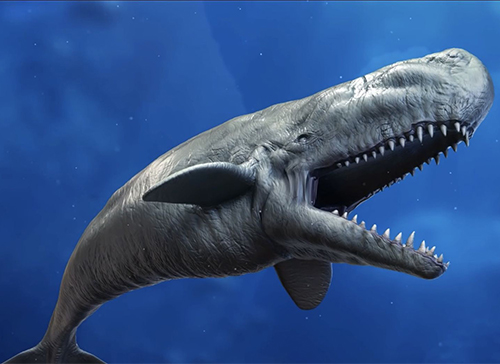 The Livyatan melvillei wasn't any bigger than the sperm whales of today, but unlike sperm whales, this creature used its massive teeth to chomp down on its prey and trap it within its 10-foot skull.

The Livyatan melvillei also had echolocation abilities, unlike the other marine life during the time, allowing it to survive the murkiest ocean depths.

This hyper-carnivorous whale loved to dine on shark species.

Other Dino Species That Lived In Water 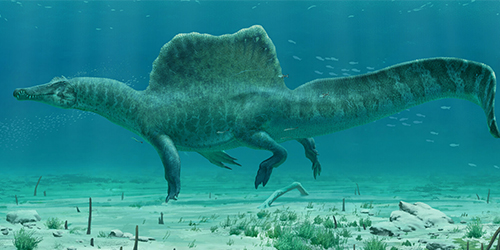 The megalodon was another terrifying species. As far as megalodon size comparison goes, these formidable sea creatures weighed as much as ten elephants and were as large as a school bus. With an abundance of fossilized teeth found on the seafloor, scientists have plenty of evidence surrounding the massive feeding frenzies of these wild sharks. Just like today's sharks, megalodons would spend their entire lives producing new teeth - up to 40,000 throughout their lifetime.

You definitely wouldn't want to be swimming at the same time as a megalodon, as these top predators had the ability to chomp whales in half with their massive jaws. To see the size of a Megalodon vs Blue Whale, see our recent article!