While these flat-bodied specimens may look like they are from another planet, stingrays are pretty common in many parts of the world. They're often found in the tropical and subtropical waters of the ocean, as well as rivers and freshwater lakes, so locking eyes with one of these funky little vertebrates at least once in your life, wouldn't be a surprise.

Of course, to respect and interact with wildlife, you must understand it.

So today, we want to take you through our little guide to stingrays so you can find out what makes these marine animals some of the most important and unique creatures around.

Stingrays have flat, wide bodies and long tails with barbs on the end.

While they do not have sharp teeth, stingrays are closely related to sharks and are similar in many ways.

For example, both sharks and stingrays belong to the cartilaginous fish family, meaning they have cartilage skeletons rather than bones.

So yes, rather than a bony skeleton, stingrays are made up of the same material you find in your own ears and nose. 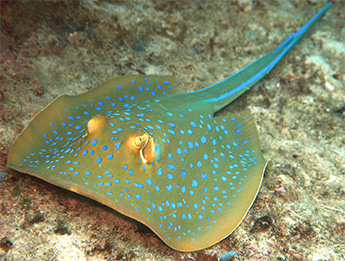 Their skin is similar to sharks' too. Plus, both sharks and stingrays use Lorenzini sensors, which pick up the electrical signals from their prey.

FUN FACT: The largest species of stingrays can be up to 6.5' feet or longer, weighing up to 800 pounds!

How Do Stingrays Get Around?

While many stingrays look as if they're flying through the water, most species use undulation to navigate the ocean floor, similar to how a wave moves. Scientific research showed that stingrays in South Africa often moved at around 1.35 kilometers per hour.

FUN FACT: Stingrays find prey with electro-sensors on their body, not their eyes.

What Color Are Stingrays?

You probably remember the sad day when Steve Irwin, famous Australian wildlife activist, was fatally pierced by the barbed tail of a stingray. Stingrays have long, venomous barbed tails, which can cause humans immense pain.

If untreated, this wound can lead to infection. According to the National Capital Poison Control Center, somewhere between 1,500 to 2,000 stingray injuries occur each year. Most stingrays will attack the feet or legs.

Stingrays will often use their barbs to protect themselves from predators or stun small fish on the seafloor to eat.

FUN FACT: While stingray venom can be painful, it isn't necessarily deadly unless the victim is stung in the abdomen or chest. Ancient Greek dentists used venom extracted from the spines of stingrays as an anesthetic for their patients.

Fact: Due to their barb, stingrays are one of the most dangerous sea creatures. 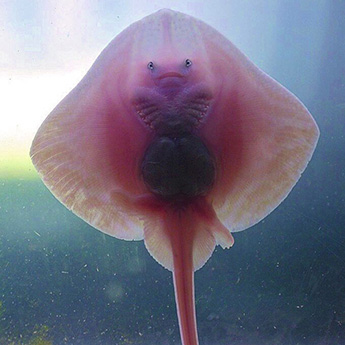 Baby stingrays are born fully formed and ready to swim. They are proportionate, miniature versions of their parents from the moment they enter the world.

However, even though they are excellent swimmers from birth, their mothers often stick around for the first three years until they can fend for themselves.

FUN FACT: Stingrays eat mussels, shrimp, and clams! They capture their prey with their bodies before crushing it with their powerful jaws.

One of the ocean's rarest species is the small-eye stingray, which has small eyes, white spots, and a wingspan greater than seven feet long!

Most stingrays like swimming around in shallow water, especially in tropical and subtropical regions, as it's much warmer here than in the open ocean.

Are Sting Rays The Same As Manta Rays?

While many people lump these two marine creatures into the same category, they are quite different. For example, a stingray's mouth can be found on the underside of its body, while a manta ray's mouth lies at the front of its body.

Manta rays do not have a barb or stinger on their tails, and they spend most of their lives in the open water instead of on the sandy ocean bottom.

Head over to our Manta Ray vs Stingray article to learn more!

FUN FACT: The leathery skin of the Stingray has been used to make belts, boots, jackets, wallets, and exotic shoes. The Japanese will often use stingray skin to make the underside layer of Japanese swords.

Stingrays Have Been Around For A Long Time

A fossil was discovered by the Institute of Paleontology of the University of Vienna back in 2019. This fossil dated back 50 million years and was, you guessed it, a stingray fossil!

Researchers linked the radiation to the aftermath of the Cretaceous extinction event, which wiped out millions of creatures around the globe. Data now suggests that the modern stingray diverged from a similar species that was around 150 million years ago during the Late Jurassic period.

So yes, stingrays were around during the same time as the dinosaurs. 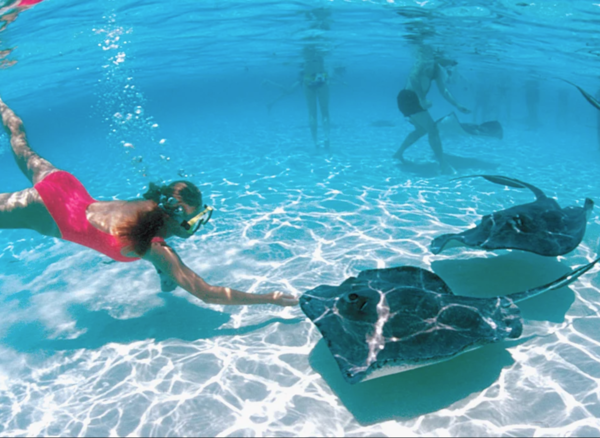 Do Your Part to Protect Stingrays

Stingrays are slowly becoming an endangered species due to habitat loss. One of the best ways to protect stingrays is by purchasing sustainable seafood that supports non-overfishing policies.

If you ever see stingrays near the shoreline, it is best to practice the "stingray shuffle" to avoid getting stung. Essentially, rather than walking in shallow waters the same way you would on land, shuffle your feet in the sand to keep from stepping on a stingray. The sand you kick up with your feet alerts them, letting them know you are nearby, so that they won't sting you in an attempt to protect themselves. Not only will you prevent harming wild stingrays by stepping on their bodies, but you'll also protect yourself from getting stung!