Every time sharks are mentioned, massive great whites immediately come to mind. However, there are many unique smaller versions that deserve some attention too. You won't have to worry about shark attacks with these guys, as some of the smallest full-grown sharks can fit in the palm of your hand!

If you're ready to learn more about these tiny predators, come with us as we dive in and explore the world of small shark species.

The world's smallest species of shark is the green lanternshark. To put it in perspective, one of the largest lanternsharks ever found was only 10.2 inches long.

You can find these tiny guys through the Caribbean Sea, Gulf of Mexico, Central Atlantic, and Atlantic Ocean.

Males are often smaller at about seven inches in length, while female sharks tend to be a bit longer at nine inches.

Despite their tiny size, these sharks work together in large packs to gang up on larger animals, such as octopus and squid. 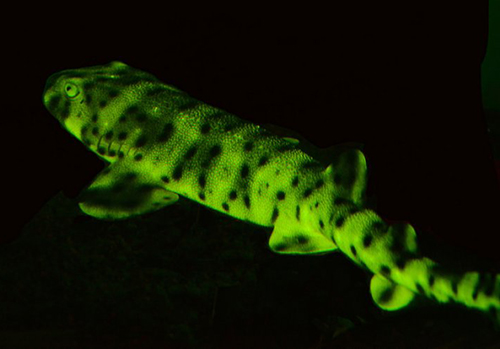 The most astounding thing about this species of shark is that they are bioluminescent! Melatonin in the green lantern shark's cells cause them to glow and this glowing acts as camouflage, allowing them to be less detectable to predators that may be lurking blow them.

More often than not, they can be found swimming in deep water anywhere from 1,200 to 3,000 feet beneath the surface. 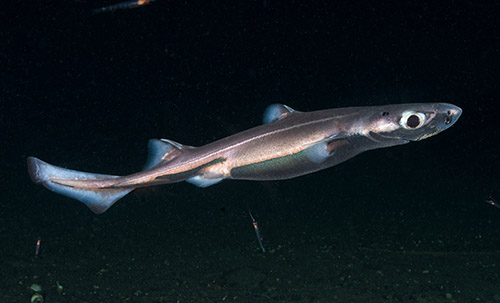 African lanternsharks are slightly larger than their Green lanternshark cousins at about 9.4 inches in length.

They are found off the African coast, hence the name. This small species can often be found anywhere from 1,000 to 3,300 feet below the surface of the West African continental shelf.

Similar to green lanternsharks, even though they are a bottom-dwelling species, they're often unintentionally caught in the fishing nets of commercial shrimpers.

Just how many sharks are killed a year? The answer may surprise you. Read our recent article to find out!

These 9.4 inch sharks spend most of their lives in complete darkness. To attract prey or confuse predators, they use a unique luminescence.

Like many sea creatures found in deep water, the African lanternshark is quite challenging to study. But we do know that they eat cephalopods, crustaceans and bony fish.

The Atlantic Ghost Catshark is another species of sharks living in deep water.

As the name implies, they are often found on the continental shelf of the Atlantic Ocean near the Madeira area and the British Isles.

However, they love the ocean's darkest depths and rarely make their way above 4,900 feet.

Inspecting their dorsal fins is the best way to identify this shark species.

Their first dorsal fin is smaller than the second, which is seen in the reverse in most other species. 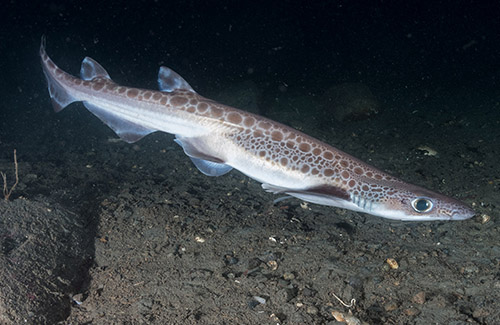 These sharks also have elongated eyes, which are around 5% of the length of their bodies, giving them an appearance similar to cats.

Even more than the other sharks above, this shark is extremely rare, and scientists know very little about how they breed or behave in the wild. However, we believe that they love eating small bony fish such as teleost, as well as crustaceans and cephalopods. On average, they grow to be about 9.25 inches long. 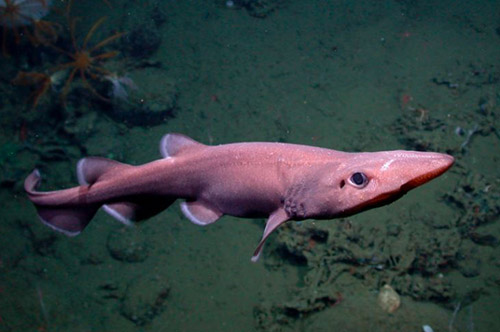 Like most sharks on this list, Panama Ghost catsharks are bottom-dwelling sharks. Typically, you'll find this shark swimming in depths anywhere from 3,000 to 3,200 feet.

One interesting fact is that these sharks are nocturnal. Any activities, such as hunting, are done during the nighttime.

Another special thing about this shark is that it lays eggs that contain its young. However, that is most of what we know about this shark, as it is sporadic and difficult to study. The exact size of its young is pretty much unknown, as scientists haven't been able to gather much data. The technology of deep sea explorers is improving, however, so we can expect more research to be conducted in the future.

Just slightly smaller than the other sharks above, the smalleye pygmy shark only grows to be about 8.7 inches in length.

This shark lives in the Pacific Ocean in can be found in just about every water layer.

However, where it resides depends on the time of day, and you'll rarely see this shark swimming around the abyssopelagic zone.

During the night, the smalleye pygmy shark will swim to the higher ocean layers to feed before making its way down to deeper water during the day. 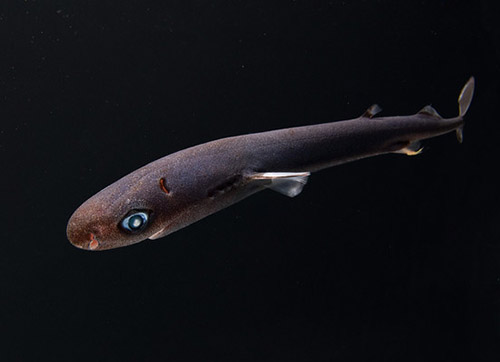 The smalleye pygmy shark spends most of its life on continental slopes, which is why it can migrate at such impressive rates. Most often, you'll find this shark around the coasts of Japan, Taiwan, Indonesia, and Australia.

With relatively high population numbers, there is no concern of this species becoming endangered or added to our list of extinct ocean animals anytime soon. 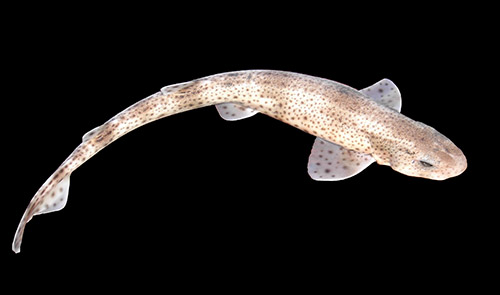 Found in the shallower water of the Indo-Pacific region and the Indian Ocean is the Pygmy Ribbontail Catshark. You'll often find this shark swimming about in the continental slopes between 230 and 2,500 feet.

Unfortunately, this shark is a major bycatch product, plagued by shrimp trawlers in Southeast Asia and India. To avoid being part of bycatch, the pigmy ribbontail catshark will often swim deep beneath the surface to avoid trawlers altogether.

You can find Pygmy Ribbontail Catsharks in the Gulf of Aden and off the coast of Yemen, as there are no commercial fisheries in these regions.

This species is quite small. Most males only grow up to 7.4 inches in length, while females grow to 6.3 inches in length. However, one of the largest Pygmy Ribbontail Catsharks ever found was about nine inches long.

The Spined Pygmy Catshark has the widest population distribution compared to the other species on this list.

While the shark population is quite fragmented, you can find them spread out off the coasts of various continents and islands throughout the Indian Ocean, Pacific Ocean, and the Atlantic Ocean.

This deep-water shark spends most of its time between 2,000 and 2,500 feet beneath the surface, though it can make its way between 30 and 5,900 feet, giving it quite a range.

This tiny shark births live pups, often anywhere from 3-5 at a time. Most of these pups will come out at only three inches in length. Males often grow to be around 5.9 inches long, while females are slightly larger at 6.9-7.7 inches long.

At one point, scientists believed the spined pygmy shark was the smallest in the world. However, they eventually discovered what would hold the record... 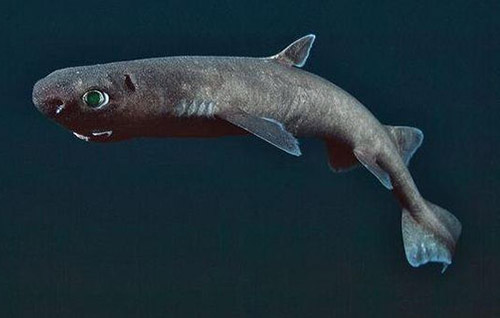 According to the Guinness Book of World Records, the smallest shark in the world is the Dwarf Lanternshark.

However, even when accounting for both sexes, these sharks still hold the world record.

Similar to other lanternshark species, the dwarf lanternshark is bioluminescent, which it uses to attract prey and confuse predators.

Instead of laying eggs, the Dwarf Lanternshark gives birth to live pups, often with litters of two to three pups at once. In terms of their habitat range, it is quite small. You will only find them throughout the continental slopes of Venezuela and Colombia.

As with many other small species, these sharks will often become products of bycatch with other small fish in deepwater fisheries. The good thing is that because this species can live beneath the surface at around 2,000 feet, they can often avoid commercial fishers.