Whether you are a surfer, stand-up-paddleboarder, bodyboarder, or scuba diver, you've likely seen a shaka sign thrown up before.

The Shaka sign, otherwise known as the "Hang Loose" sign, is used by ocean lovers across the globe. The question is,

How did this little gesture that was once a sign used exclusively by the Hawaiian locals spread so far and wide?

The Shaka sign was born in Hawaii. Surfers who would come to the island to visit eventually took the hand sign and made it popular in other places besides the island.

In Hawaii, the Shaka sign is used by all of the locals.

This unique hand gesture carries a variety of meanings, such as "cool," All Right," or "Thanks." Similar to Aloha, it can also mean "Hello" and "Goodbye."

When asked about the Shaka, however, Hawaiians will tell you that it is a sign of love and appreciation. Similar to a wave, it is a part of daily life in the islands.

Many people to this day attribute the phrase "hang loose" to the Shaka. 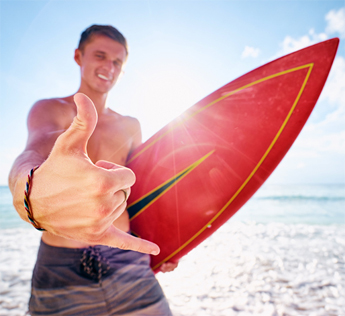 How To Make a Shaka

One reason why the Shaka is so popular is that it is very easy to make. Plus, it just feels good.

To start, create a fist with your three middle fingers curled, but keep it loose. Open only your thumb and pinky.

Lastly, any Hawaiian local will tell you that the recipient of the Shaka should see the back of your hand, as it shows respect. To punctuate it, a bit of subtle back and forth is always a nice touch!

The Origin of the Shaka 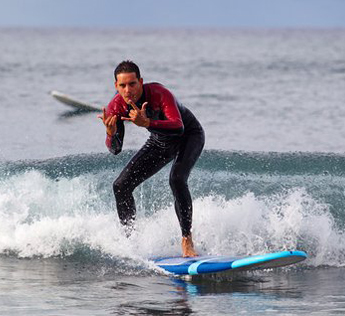 The way in which the Shaka originated is up for debate, as there are many versions of the story. However, the most popular one comes from the East side of Oahu.

According to legend, a man named Hamana Kalili from the east side of Oahu lost his three middle fingers on his right hand while working at the Kahuku Sugar Mill, leaving him with only his thumb and his pinky.

Now while there are many versions of the story, just about every Hawaiian can agree that his name was Hamana Kalili, he lost his right hand, and that after his accident, he was put in charge of the Sunset Beach sugar train.

He would go on to use this gesture to indicate that the train was free of jumpers, which would eventually become the popular symbol throughout Hawaii and the world.

There are a few other origin stories out there as well.

Some surfers say that it came from a man who had his three fingers bitten off by a shark.

Others say that it came from Spanish Immigrants who folded their middle fingers to gesture sharing a drink with someone.

Why Do People Call It The Shaka?

Most people will tell you that the 0rigin of the word "shaka" came from a man named Lippy Espinda, a Hawaiian car salesman. In his ads, he would often throw up the symbol and yell Shaka Brah!

Surfers and other locals would go on to use the same gesture with the same words.

Shaka Culture Around The World

The Shaka is just as much a part of Hawaiian culture as Aloha.

Whether you think the origins of the Shaka come from the Kahuku Sugar Mill, a two-fingered surfer, or a Spanish immigrant, it doesn't stop the fact that this gesture is used by water lovers across the world.

Even today, two riders who are complete strangers may use this gesture to create an instant bond.