When people think of porpoises and dolphins, they often think of the same animal. So, of course, when they find out that they are two totally distinct species, they're often surprised.

While these two creatures do share similarities, their unique characteristics are what gives each of them a separate place in the animal kingdom.

So, what's the difference between dolphins and porpoises?

Lets dive in and find out!

Difference Between Dolphins And Porpoises

The main difference between these two marine mammals is most noticeable in their faces, fins, and body shapes.

Dolphins have elongated beaks that stick off prominently from their faces, as well as cone-shaped teeth. They also have a curved dorsal fin, which many people refer to as "hooked," which sits on the center of their back. More often than not, dolphins have lean and long bodies compared to porpoises.

Porpoises, on the other hand, have much smaller mouths and spade-shaped teeth. In addition, their triangular fins differ from the curved dorsal fins on dolphins, and their portly bodies are much smaller than dolphin bodies. 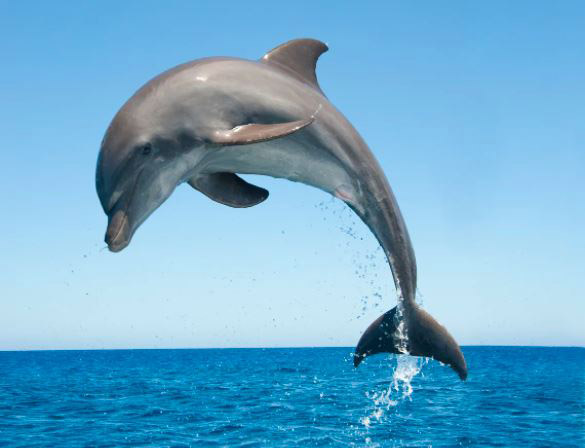 Beyond the way these two species look, the way they act is different. Dolphins tend to "talk" a lot more than porpoises, using their blowholes to whistle at each other beneath the water's surface. After much research, scientists have come to the conclusion that porpoise blowholes are not structured the same way as dolphins', making porpoises incapable of "speaking" the same way that dolphins do.

Similarities Between Dolphins And Porpoises 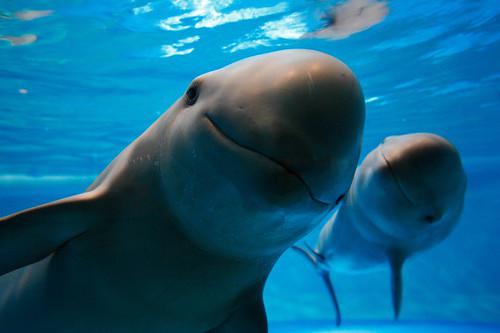 Dolphins and porpoises are closely-related species, which is why they have notable similarities.

For starters, they both have incredibly complex brains, which is why both dolphins and porpoises are so intelligent. The melon, which is found in the front part of the forehead of both these marine mammals, generates sonar or sound waves so that they can explore their marine environment.

Neither of these marine mammals has a sense of smell, as their blowholes remain closed when they're below the water's surface.

When it comes to their personalities, both are very playful and charismatic. You'll often see them leaping out of the water and swimming in quick bursts.

One way scientists tend to differentiate these creatures is by their habitats.

As for their primary environments, they tend to live in coastal waters.

However, porpoises require much shallower water, and they enjoy both freshwater and saltwater. So you'll often find them throughout the Pacific and Atlantic Oceans, though many live in the Black Sea too.

Dolphins typically have more say in the environment in which they choose to reside. However, most dolphins prefer warm waters, which is why they are often found in temperature or tropical locations. Dolphins also venture much deeper into the ocean than porpoises.

As of today, scientists know of 49 species of dolphins.

Some of the most common dolphin species include: 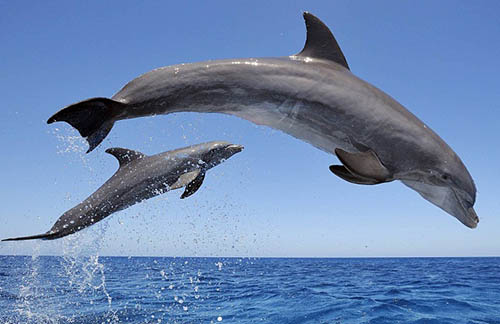 In terms of color, you can find dolphins in white, brown, blue, grey, pink, and black!

The orca, otherwise known as the killer whale, is actually not a whale at all, but the largest dolphin species in the dolphin family!

If that is news to you, (as it is to most of us) head over to our Are Orcas Dolphins Or Whales article!

As of today, scientists know of 7 porpoise species.

These porpoise species include: 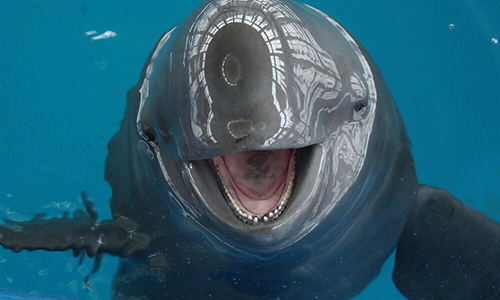 In terms of color, you can find porpoises in black, light grey, dark grey, and white. As you can see, compared to dolphins, there are much fewer color variations in porpoises.

Can Dolphins And Porpoises Mate?

Absolutely! Dolphins and porpoises have mated, according to a few recent studies. Scientists even say that these hybrids are fertile!

How Smart Are Dolphins?

You've probably heard about how smart dolphins are, they're constantly praised for their intelligence. They learn quickly and can problem solve on a dime. They also show emotions, which we associate with intelligence, including joy, grief, playfulness, and more.

What is possibly the most remarkable, is that dolphins demonstrate self-awareness. Our "How Smart Are Dolphins" article explains in further detail.

While many think of dolphins as fun-loving, carefree animals that show off in aquariums and swim alongside ships to pose for pictures, they are actually quite aggressive. The dolphin family has a dark side, as they're often seen hunting down porpoises and hurting them purely for entertainment. They almost act like big bullies, biting and scarring porpoises, leaving them dead to wash ashore.

You may now be wondering, "Do dolphins attack humans?" There have in fact been several instances where wild dolphins have caused significant harm to people, even hospitalizing and killing them.

On the other hand, porpoises don't act aggressively towards humans often, even though they have sharp teeth that can do some significant damage.