Sharks are often referred to as "living fossils," as they've been roaming the Earth for hundreds of millions of years. In fact, they've not only survived, but thrived throughout the past five mass extinctions. So, you might be wondering,

What is the oldest shark alive?

Dive in with us as we explore some shocking facts about the oldest living shark!

The Oldest Shark In The World

The oldest shark in the world is thought to be around 392 years old, which is astonishing compared to the average shark lifespan of 20-30 years.

Marine biologists found the world's longest-lived shark while studying Greenland Sharks off the coast of the North Atlantic and Arctic oceans.

Greenland sharks are definitely not small sharks. They're categorized as cartilaginous fishes, and they're one of the largest in their grouping. They are roughly the same size as great whites. 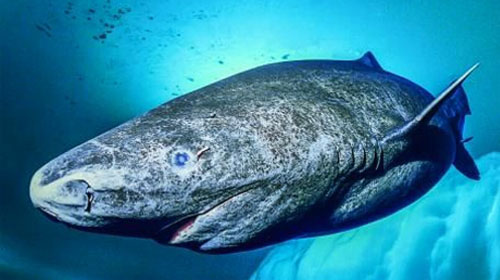 Not only is the Greenland shark the oldest shark species, but scientists agree that it is one of the oldest animals in the world with backbones.

The largest Greenland shark ever found was a five-meter female Greenland shark found in bycatch in the North Atlantic. A marine biologist was able to carbon-date the proteins on the Greenland shark's body to determine its age. Of course, carbon dating only gives us an estimate, so this particular Greenland shark could have been much older, it's just difficult to say. 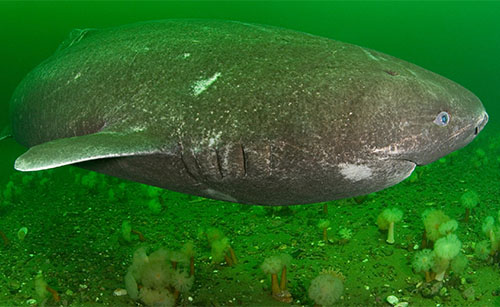 So, how long do Greenland Sharks live?

In a recent study by Science, marine biologists determined that the average age of a Greenland Shark was around 272 years old.

The age was determined after closely researching a group of 28 Greenland sharks.

Greenland sharks are ablet to live so long because they have such slow metabolisms, allowing them to adapt to the cold, deep waters in which they thrive. In fact, the Greenland shark is the only shark able to survive in the Arctic Ocean throughout the entire year.

Because these sharks grow at such a slow pace, they don't reach sexual maturity until they have lived for about a century! Greenland sharks do end up getting stuck in fishing nets and caught accidentally. However, long before modern times, the Greenland Shark species was hunted for its liver oil. We've got an article dedicated to answering the question: how many sharks are killed a year? Read it to learn more! The answer may surprise you.

How Long Do Sharks Live On Average?

The Greenland shark is by far the longest-living shark out there.

Most sharks will live to be anywhere from 20 to 30 years old, though some can live to be up to 70 years old while other species never make it past 15.

Great white sharks have a lifespan that is very close to that of humans. We now know that that great whites can live as long as 70 years, which is far longer than scientists previously thought.

The whale shark is the biggest shark in the world. While much about whale sharks still remains a mystery, scientists estimate that these sharks can live up to 130 years, though they live anywhere from 80 to 120 years on average.

Average thresher sharks have a wide lifespan, living anywhere from 19 to 50 years. They often live longer because they reproduce later in their lives. A male thresher won't reach sexual maturity until it is around 3 to 6 years old.

Hammerheads are incredible sharks, and they've rightfully earned their place on our most dangerous & aggressive sharks list. A female can have anywhere from 7 to 45 pups during her lifetime. However, they don't have the greatest of lifespans, as they only make it to 20 or 30 years. With that said, scientists have discovered hammerhead sharks that have had 44 years under their belt.

Tiger sharks have incredible eyesight compared to other shark species, and they are some of the best hunters around. Tiger sharks only live for around 12 years, and they reach sexual maturity around ages 4 to 6.