When people think of the ocean, they often focus on whales, sharks, dolphins, and other marine life that moves, eats, and has similar traits to us. However, we often forget about marine plants, which there are thousands of unique species.

Plants that live in the ocean vary based on salinity levels, available sunlight, and water temperature. However, ALL of them play a crucial role in delivering oxygen to the world's oceans while providing food and shelter to help animals thrive.

Come dive in with us as we explore the common types of marine plants.

Plants In The Ocean

There are two main categories of underwater plants living in the ocean, including floating plants and rooted plants.

Floating plants live near the water's surface, while rooted plants are often found rooted on the ocean floor near shorelines because of their need for sunlight to survive.

Let's look at a few common floating and rooted plants.

You've undoubtedly seen a kelp forest if you've ever spent time swimming about in the ocean.

Kelp beds are more often found in cold-water oceans, mostly near roky coastlines at around 20 to 90 feet deep.

With a unique, root-like structure, these algae plants are able to float thanks to special bulbs attached to their stems.

However, kelp needs sunlight to survive, which is why it is only found in shallow waters. 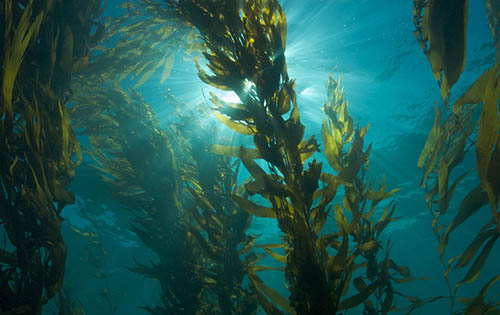 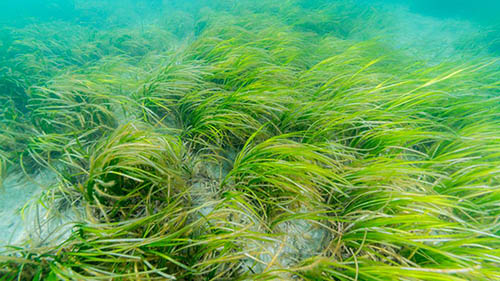 Sea grass is a rooted plant that lives in shallow waters along the coastline, as it needs sunlight for survival. There are many species of sea grass out there, some of the most popular of which include shoal grass, turtle grass, and manatee grass. These unique marine species have evolved over thousands of years to thrive in saltwater.

In addition, sea grass plays a crucial role in providing oxygen for the ocean, though it also releases pollen for other sea plants to thrive.

Beyond that, seagrass is home to many smaller forms of sea life, making it one of the most important types of aquatic plants in the ocean.

Scientists estimate there are anywhere from 30,000 to one million species of algae living in the world.

Red algae have been around for more than 500 million years and can be found in warmer, tropical waters throughout the world. This unique algae gets its color from a pigment called phycoerythrin, which absorbs blue light while reflecting red light.

The red tide is caused by this specific algae. 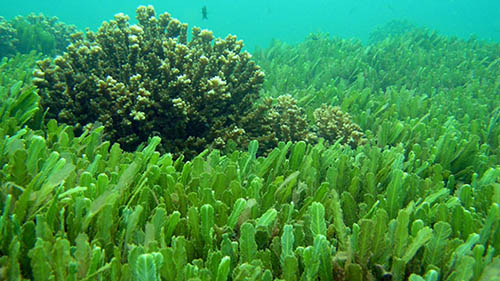 Red algae are very similar to kelp in that it is full of vitamins and proteins.  This is one of the reasons it has become such a popular food source for humans, especially in Asian countries.

Coralline alga is a unique type of red algae that is made up of ultra-fine, rock-hard filaments. This alga supports the structures of coral reefs.

One of our other favorite algal species is Muskgrass. Though it has "grass" in the name, muskgrass is a form of nutrient-rich algae. It is an incredibly popular food source for several fish. However, the characteristic that truly sets it apart is its garlic-like smell. 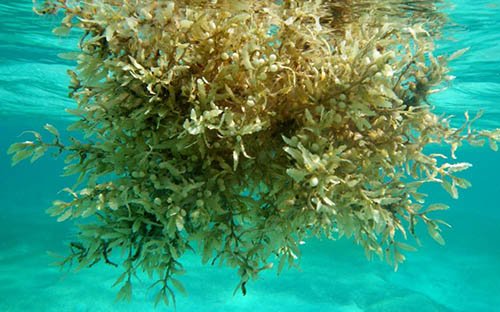 There are several species of free-floating plants found in ocean water, many of which can make their way between freshwater and saltwater environments. Let's look at some of the most popular.

Often referred to as sea holly or gulfweed, sargassum belongs to the category of floating ocean plants, playing a crucial role in the development of thousands of marine species. You can differentiate sargassum from other underwater plants thanks to its characteristic bushy, brownish-green fronds and its gas-filled bladders that help it float.

With these special floating bladders, sargassum can stay near the water's surface, helping it to photosynthesize. Young sea turtles use it for food and shelter while they develop, using it as stops throughout the long journey back home.

Many people refer to the North Atlantic Ocean as the Sargasso Sea, thanks to the abundance of Sargassum.

A few other popular, free-floating aquatic plants include duckweed, water hyacinth, mosquito fern, and watermeal. These plants float freely on the surface of the water, thriving on sunlight.

Though older science tells us that the sea anemone is a marine animal, new studies show us that this ocean creature is actually half-plant, half-animal.

For that reason, we believe it belongs on this list!

There are more than 1,200 anemone species in the ocean.

In our opinion, they are some of the most breathtaking natural wonders the sea has to offer. 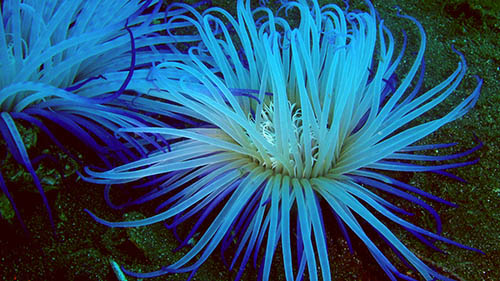 You probably remember the sea anemone from Finding Nemo and how Marlin and Nemo (the two clownfish) were the only fish immune to its stings. This is true, which is why clownfish use sea anemone for shelter.

The green sea anemone is one of the most striking anemone species and looks very similar to the Anastasia Flower, which is found on land. You can find this wonderful little green species attaching itself to rock surfaces and coral reefs.

Another incredible anemone species is the white-plumed anemone. These unique sea plants thrive in the cold waters of the Pacific Ocean from San Diego to Alaska, growing as tall as three feet. Exploring a coral reef, you might think that the pillowy-looking tops could provide a nice little place for fish to take a nap. However, those pillowy tops are actually stinging tentacles which the anemones use for catching prey. 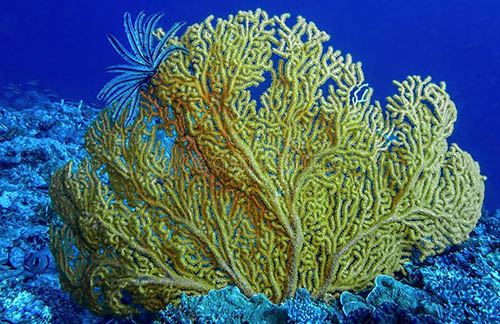 With more than 6,000 coral species throughout the world, we could write an entire novel about them.

However, in our opinion, there are a few types of coral that stand out from the rest. One of them is purple coral, which has a lilac-purple look. It is part of the Acropora coral family, one of the most popular types of coral found in coral reefs throughout the world.

Many refer to these corals as reef-building species, as they are usually the first things that appear when a new reef is on the horizon.

Another incredible coral species is the sun coral. Despite its name, it doesn't need much sunlight to live. In fact, this coral species often makes its home in dark caves ​deep beneath​ the water's surface. To get the energy they require, they often feed on zooplankton. With homes deep beneath the surface of the water on the ocean floor, some people refer to them as stony coral.

FUN FACT: Sun coral can be found all over the Caribbean Ocean, as long ago, it attached to the ballasts of ships coming from its Indo-Pacific Ocean homeland.

If you've ever explored a coral reef, you've likely laid eyes on soft coral as well. These brightly-colored organisms are part of the subclass Octocarllia and are known for their jaw-dropping colors and radical symmetry. In terms of shape and size, soft corals vary. You can find soft coral in shallow waters throughout tropical regions and cold, deep waters throughout the ocean.

Next on the important coral species list is the red sea whip, which is a type of soft coral and part of the Alcyonacea family. Unlike hard corals, soft corals do not have calcium carbonate skeletons, giving them their softer characteristics. The red sea whip has several coral polyps, which are small tubular parts with tiny tentacles that it uses to take in food. You can find these corals in shallow water throughout tropical and sub-tropical regions.

Of course, we can't end our coral discussion without talking about open-brain coral. The unique open-brain coral species can be found throughout the warm and shallow waters of Indonesia, the Red Sea, and the Australian archipelago.

Open-brain coral is a type of stony coral that is often harvested for aquariums. Unfortunately, with the reduction of its coral reef habitat, it is one of the many near-threatened coral species. 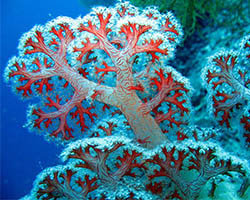 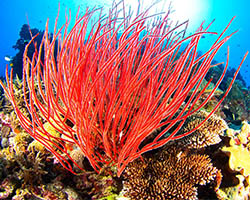 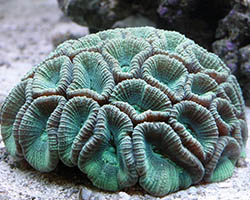 You won't find a diverse ecosystem quite like a coral reef anywhere else in the world. Unfortunately, these dramatic and detailed landscapes are under threat due to pollution, global warming, and overfishing.

The Great Barrier Reef is the largest coral reef on Earth. With rising water temperatures, this reef is dying. Scientists refer to this dying process as "coral bleaching." With dramatic temperature increases, microscopic algae are dying. Other sea life that requires these algae to survive is dying in the process, creating a devastating chain reaction.

Luckily, there are things we can do to protect coral reefs and the gorgeous plant life found inside them, including: