Going on Vacation? Will you be swimming in the Indian Ocean? Maybe you will be visiting Pacific Ocean coastal regions? Have you considered the dangerous sea creatures that could be lurking?

Don't panic! Although there are many dangerous sea creatures, if you know how to spot them and avoid their territories, you'll reduce you risk of any nasty encounters.

Scroll down to learn all about the 12 most dangerous sea creatures. 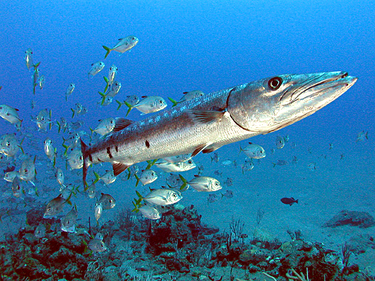 The great barracuda is a large torpedo-shaped fish with multiple of rows of sharp teeth. Although attacks to humans are rare, they do occur when barracudas attempt to take prey from a diver's fishing spear, or when they spot the glint of a shiny object on a diver, confusing it with a shiny fish they would like to eat. A bite from a great barracuda can leave you with deep cuts and chunks of missing tissue.

The triggerfish is not venomous, but bites from its sharp teeth are painful and can result in injuries needing medical attention. Divers and snorkelers are often victims.

The triggerfish's territory is shaped like a cone, extending upward from the seabed. If faced with a feisty titan triggerfish, you have to swim away horizontally rather than upwards to escape the attack. 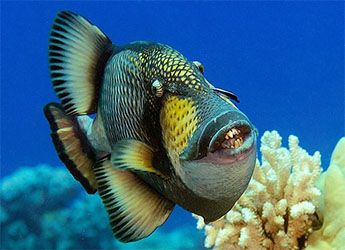 Fun Fact- The titan triggerfish's cousin, the reef triggerfish is the official Hawaii State Fish, called "Humuhumunukunukuapua`a" in Hawaiian, and has the same strong cutting teeth! 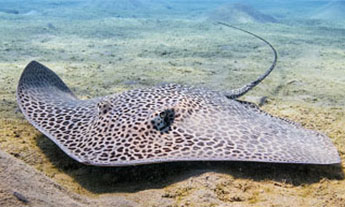 Stingrays are usually gentle creatures, but can sting if provoked or accidentally disturbed by a swimmer.

They spend a lot of time partly buried in the sand in shallow waters, and are frequently stepped on by people. They are many different species found all over the world.

A few stingray facts are that they have a long and thin tail with a barbed end, which contains venom. The sting can be extremely painful but is very rarely fatal.

There are maybe a couple of deaths each year. Sadly, a freak incident involving an Australian bull ray resulted in the death of conservationist Steve Irwin, also known as 'The crocodile hunter", when its venomous spine pierced his chest.

Brought into the limelight by Steve 'The Crocodile Hunter' Irwin, saltwater crocs are considered the most dangerous creature in Australia.

They kill around 2 people every year in Australia alone. Saltwater crocodiles are massive, weighing over 1000kg.

Their sheer size coupled with speed and an incredibly powerful bite, makes them not only one of the deadliest creatures in the water, but also on land. 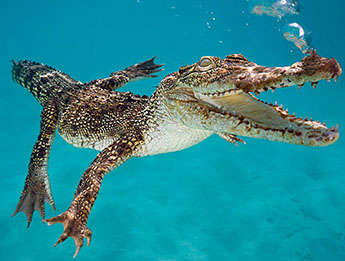 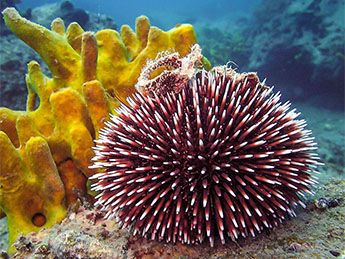 There are many species of sea urchins. They have sharp poisonous spines which are extremely painful if they pierce the skin.

The puncture wounds also have a tendency to become infected.

The flower urchin is one of the more perilous sea creatures, as their extremely painful stings can lead to paralysis and even death.

They are usually found in rocky or sandy sea beds and coral reefs in the Pacific and Indian Oceans, so take care to avoid their venomous sting.

Out of the several hundred different species of sharks, only about 12 species are thought to pose a danger to humans.

Loaded with row after row of razor-sharp teeth, the great white shark is considered to be the deadliest. 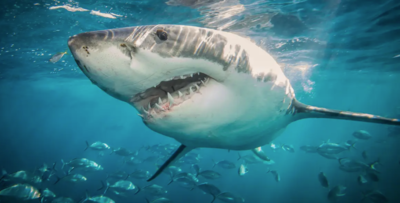 hammerhead and nurse sharks have also been known to attack humans. Although some people consider sharks to be terrifying, these beautiful creatures are actually only responsible for an average of ten deaths, and about a hundred attacks each year, some of which are due to the shark being provoked.

Generally, most shark attacks occur while surfing or undertaking other types of board sports. 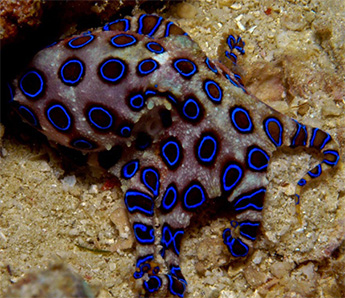 The most venomous marine animal in the world, the blue-ringed octopus is a tiny creature weighing in at about 30g, but contains enough venom to kill almost 30 adults within minutes.

When a person is bitten, the highly toxic venom causes paralysis, and the unfortunate victim can die of suffocation as their muscles required for breathing become paralyzed.

For example, if accidentally stepped on or poked.

In the unlikely event of being bitten by a blue-ringed octopus, the venom will wear off on its own after a day or so, but the victim requires hospital treatment with a ventilator to keep them breathing in the meantime. The blue-ringed octopus is known to have killed at least 3 people. Many others have survived a bite.

For more info, see our are octopus dangerous guide.

Because there are hundreds of different species of cone snails, they are found all over the world including the Red Sea, Southern African Cape Coast, and the Indian and Pacific Oceans. The more dangerous species populate the Indo-Pacific regions. The cone snail's venomous sting is not only painful, it is deadly.

They use it for hunting, but humans are frequently stung after picking up, or standing on a live cone snail. One of the more toxic species, the textile cone snail, is a particularly beautiful creature with an intricately patterned shell, making it popular with shell collectors. 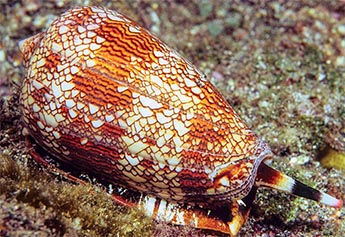 Shell collectors must take extra care not to collect a live textile cone snail to avoid getting stung. The most deadly cone snail is the cigarette snail, receiving this name as it can kill its victim in the time it takes them to smoke their last cigarette. Around 30 recorded deaths have been caused by cone snails, but the real number is likely to be higher. 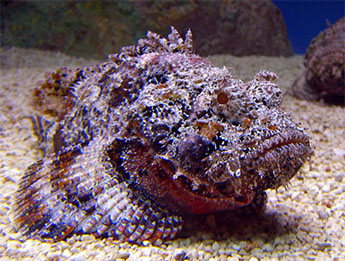 The stonefish is the most venomous fish in the world. Originally native to the Indian and Pacific Oceans, they have spread to areas like the Caribbean.

Stonefish are masters of camouflage and as their name suggests, they look very much like a stone, and are found in shallower areas of the sea hiding amongst rocks.

They inject venom via sharp spikes on their dorsal fin. This often happens when they are accidentally stepped on. In Australia alone, there are about 1000 reported stonefish stings each year.

This venomous fish has an extremely painful sting which can cause paralysis, heart failure, and death. However, an anti-venom is available, which is why no deaths have been reported for a long time.

There are over fifty different species of sea snake and they are found in the warm water of the Indian and Pacific Oceans. These highly venomous marine animals actually belong to a larger family of dangerous snakes, the cobra.

Generally, they are not aggressive creatures, but their short fangs hold highly toxic venom. Human deaths are rare because they only inject their venom in small amounts.

They are usually found in shallower waters, less than 100 feet deep, around coral reefs and mangroves, where they hunt. 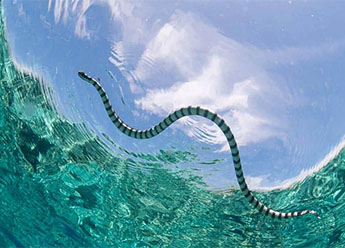 Up to 75, 000 sea snakes bites occur every year with only 3% of cases being fatal due to medical advances.

Another venomous species is the Dubois' sea snake. It spends its time in shallow coral reefs and also the sandy ocean floor. It's mostly found in the Indo-Pacific Region. Like the beaked sea snake, the Dubois' sea snake can be a bit irritable and will attack if provoked, so it does pose a concern for diving and fishing communities in these areas. 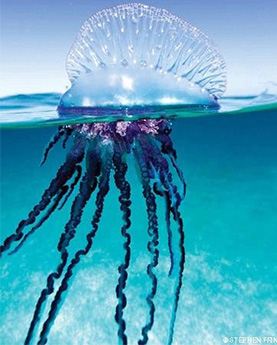 Portuguese Man O War is a type of jellyfish that is found in the Atlantic, Pacific, and Indian Oceans. It is also known as the Portuguese Man of War, Man-of-War, and bluebottle jellyfish.

The Man-of-War spends its life floating on the surface of the ocean. It does not actively swim, but is carried around by ocean currents.

In Australia alone, it causes around 10,000 stinging incidents each year. The extremely painful sting is delivered by needle-like venom-filled nematocysts on the long tentacles.

These jellyfish are often washed up on the beach, and coming in contact with dead ones or detached tentacles can result in stings. Luckily, deaths caused by the Portuguese Man O War are very rare.

This extremely dangerous sea creature is found in Indo-Pacific regions. Their bodies are see-through with some blue coloring, so they are difficult to see in the water, making them particularly dangerous for unsuspecting swimmers.

In addition to being dangerous, box jellyfish are also one of the biggest jellyfish species in the world as well. 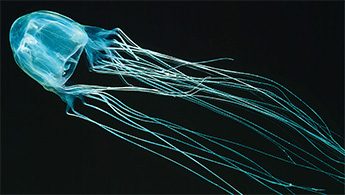 One box jellyfish has enough venom to kill around sixty people and the extremely painful sting can cause death in under 5 minutes.

One of the most dangerous sea creatures, they have long tentacles with hundreds of venom-filled nematocysts. If stimulated by contact, these dart-shaped nematocytes can inject venom into the human body. One of the deadliest creatures out there, the box jellyfish venom can cause tissue death and heart failure and results in about 50 to 100 deaths every year.

The ocean is full of beautiful creatures, some of which are very dangerous and potentially deadly. The most dangerous sea creatures are box jellyfish, man-of-war jellyfish, and sea snakes, as these 3 have the largest number of reported attacks and fatalities each year.

There are simple measures you can take to reduce the risk of unpleasant encounters with dangerous sea creatures. Treating all marine life with respect, and not provoking them is the most straightforward way of avoiding injury.

Accidental injuries are more difficult to avoid, but the risk can be minimized by taking precautions such as swimming at a beach with a lifeguard, not entering the ocean alone, looking where you are stepping, avoiding unknown marine animals, and taking extra care near rocks and coral reefs.