Since the beginning of time, humans have been fascinated with massive creatures. In the aquatic world, two huge sea species come to mind:

The megalodon and the blue whale.

To this day, the blue whale holds the medal for the largest animal in existence, yet the main thing we all seem to wonder is,

Was the megalodon REALLY smaller than today's blue whale?

Come dive in with us as we explore the difference!

Is A Megalodon Bigger Than A Blue Whale?

With the information scientists have now, the marine biology community estimates the Megalodon shark was around 60 feet long, meaning this apex predator was smaller than the blue whale when it existed.

With that said, megalodons were the largest marine reptiles and the largest fish of their time, far bigger than the great white sharks alive today.

While creatures like the Liopleurodon and Kronosaurus grew up to 40 tons, they still couldn't hold a candle to the megalodon.

To put this in perspective, a great white shark will never grow any larger than three tons. 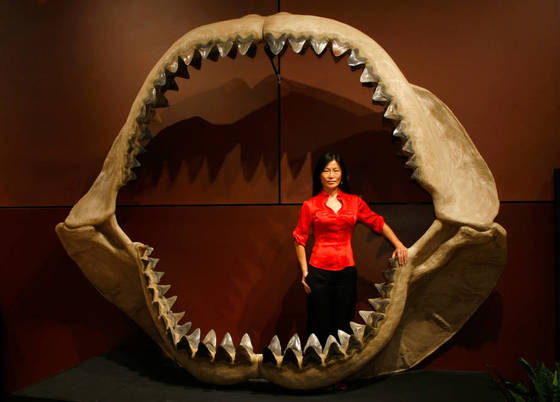 FUN FACT: While scientist used to think that the megalodon looked like a larger version of a modern great white shark, it is now believed that this creature had a much shorter nose, a flatter jaw, and much larger pectoral fins that were needed to support its massive size.

Because megalodons did not possess skeletons, it has always been difficult for researchers to come up with exact sizes. For this reason, data surrounding the size of the megalodon shark has been guesswork.

However, scientists estimate that the Megalodon shark was around 60 feet or 18 meters long.

As the biggest whale in the world, the average blue whale can grow to be anywhere from 90 to 100 feet long, trumping the size of Megalodons and other marine mammals. Even the tongue of a blue whale weighs the same as an adult elephant! The largest blue whale out there lies in the southern ocean near Antarctica. Scientists believe this particular Antarctic whale can grow so big because the waters are freezing, helping to slow down the cellular aging process.

FUN FACT: The water spray that emanates from the blowhole of blue whales can reach the top of a three-story building.

As one of the scariest prehistoric animals around, many people ask,

What did the megalodon eat?

Well, just like the sharks and killer whales of today, these apex predators would dine on just about anything that got in their way. A prehistoric whale would have been a tasty treat for an adult megalodon. They also had appetites for large turtles, large whales, dugongs, squids, dolphins, fish, and other sharks.

Megalodons were able to eat just about anything because of their incredible teeth. One megalodon tooth measures in at six inches, which is twice as long compared to the great white shark. The only creature scientists know of that had longer teeth than the megalodon was the T-Rex.

Megalodon teeth were also serrated, meaning that these massive animals would have eaten meat. Plus, we know that any animal that large requires a lot of prey.

Scientists have come upon the fossil remains of whale bones, which gives us evidence of the feeding habits of megalodons. Some of these whale fossils have Megalodon tooth cut marks etched into them, telling us that these whales were part of a feeding frenzy more than two million years ago.

These sharks had jaws lined with around 276 teeth at any given time. With reconstructions of megalodon jaws, we're able to measure the bite force of this beast, which was somewhere between 108,000 and 182,000 Newtons.

To put that in perspective, the bite force of a human is around 1,317 Newtons, while the force of a great white shark is around 18,216 Newtons. So, to put it simply, you would never want to find yourself within the jaws of the great megalodon. 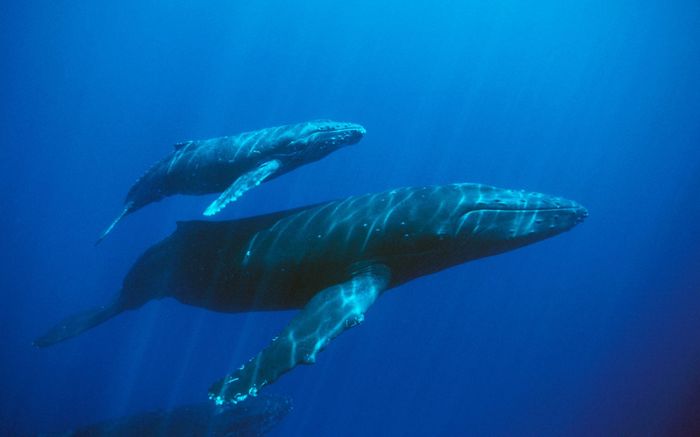 So, what do whales eat? As large as they are, blue whales do not prey on large marine animals.

They instead eat small crustaceans called krill. Krill is the staple of the blue whale diet. These gentle giants belong to the group of toothless whales, otherwise known as baleen whales.

While humans don't consider blue whales "deadly predators," when you consider the fact that they're able to consume six tons of krill each day, they become a bit more frightening.

Instead of large Megalodon teeth, blue whales use baleen plates to filter out large quantities of water when swallowing their food.

We don't know much about the way megalodons communicated, though many researchers believe that they traveled alone most of their lives.

On the other hand, blue whales travel alone or in small groups. In fact, when they're not eating, most of their time is spent traveling.

Blue whales produce some of the loudest noises in the world.

Scientists have recorded utterances from their vocal cords from hundreds of miles away in the deep ocean. Unfortunately, we don't have a clear understanding of the meaning of these sounds yet. However, it's clear that the "songs" they use differ based on the ocean basin, meaning different blue whales from different places use different songs to communicate with one another.

Why Did The Megalodon Go Extinct?

It's hard to imagine that at one point in time, megalodons were EVERYWHERE. Scientists have found their remains in warm water oceans all over the world. Unfortunately, these massive sharks went extinct by the end of the Pliocene era, which was around 2.6 million years ago.

During this time, the planet entered a global cooling phase. The scientific community does not know exactly when the last megalodon died, though the general consensus is that it was about 3.6 million years ago. Scientists also believe that the cooling of the planet was a major contributor to this species' demise. These adult sharks depended on tropical waters, and when their prey either died off or adapted and moved to colder waters where they could not follow, they were not able to survive.

It is also thought that megalodons gave birth close to the shoreline. They used shallow waters on the coast for nursing their pups and protecting them from other animals in the open ocean, such as large toothed whales. Ice began forming at the poles when the Earth cooled, meaning these shoreline nurseries were likely destroyed.

Although many believe the mighty meg is still alive and lurking in the deep sea, modern science dictates that megalodons do not exist anymore. If these massive animals were swimming around in the open ocean, we would know by now. However, if they were alive, they would be one of the most dangerous animals in the animal kingdom. It's hard to believe that dolphins or whales would be any threat to them.

That said, though killer whales are half the size of the biggest megalodon, they could be potential threats. The killer whale is one of the only marine mammals out there that hunts and kills sharks.

Did Blue Whales And Megalodons Exist At The Same Time?

Though we could definitely see it happening in the next Hollywood blockbuster starring The Rock, the Megalodon and the blue whale never met. The earliest 'modern' blue whale fossil only dates back to around 1.5 million years ago, which is slightly more than one million years after the last megalodon existed.

Why Do So Many Megalodon Teeth Exist?

Just about every fossilized remain we have of the largest shark in existence is in the form of teeth. Most sharks produce teeth throughout their entire lives. A shark can lose its set of teeth every two to three weeks, depending on its diet. In a single lifetime, a shark can go through 40,000 teeth, meaning you'll find shark teeth all over the ocean floor.

With so many of these teeth out there, there are more chances of them becoming fossilized. Plus, a shark's tooth is the hardest part of its skeleton. Sharks bones are made out of soft cartilage, which is very similar to the material found in our ears and noses. There must be very special circumstances for this cartilage to fossilize, which is why we lack skeletal evidence of this massive prehistoric shark. 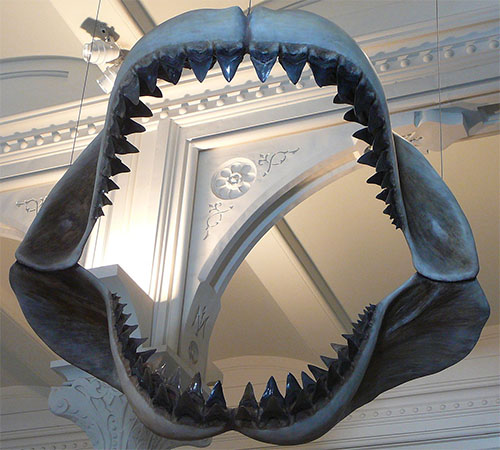