Mavericks is one of the largest and most dangerous surf breaks in the world. This immense wave has taken out several of the world's most seasoned surfers.

If you're feeling ready to take on this killer big wave, we've got all the information you'll need.

Ready to paddle out?

Mavericks is in Northern California, about four miles north of Half Moon Bay Beach, next to a town called Princeton-By-The-Sea.

Pillar Point Beach, which is only 20 miles south of San Francisco, produces the most epic right-hand wave in California.

While the calmer waters next to the harbor are great for sailing, kayaking, and paddleboarding, paddling out just over the jetty gets you into one of the deadliest big wave surfing spots on the West Coast. 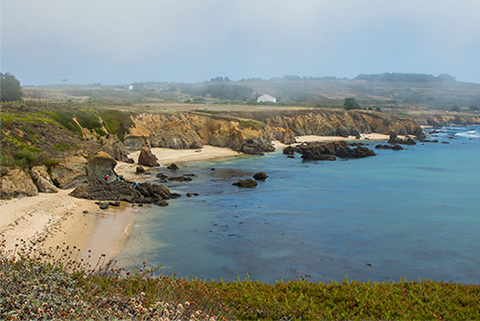 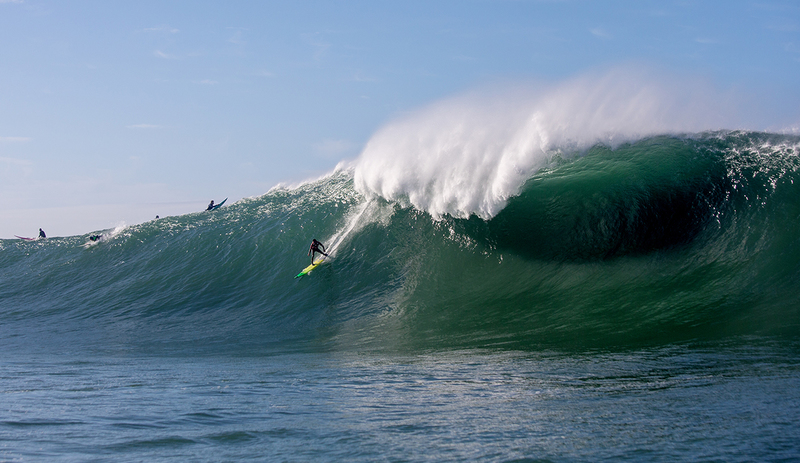 How To Get To Mavericks Surf Spot

Mavericks is a bit of a "hidden" surf spot in Half Moon Bay. You won't find any signs leading to it. Plus, getting to the nearest beach, which is known as Pillar Point, is not an easy trek either.

One of the best ways to find this giant wave is to head to Princeton-By-The-Sea. From there, you will hit Pillar Point Harbor and get directions to Mavericks Surf Shop. One of the employees at this shop will provide you with a slip that has written directions to get you to the break.

When making your way out to the break, you will want to look for the "Point." This "Point" is composed of multiple bluffs sitting just a tad northwest of Pillar Point Harbor. The massive golf ball on the hill is a good landmark to orient yourself with, which is the local radar station.

You can typically find parking by heading out to West Point in Princeton and following the narrow road to the Pillar Point dirt parking lot.

PRO TIP: Get there EARLY if you want to find parking.

Note that you cannot drive up to the top of the bluff, as it is off-limits to non-Vandenberg AFB employees.

It will be a half-mile walk from the bluffs out to the beach, so make sure to consolidate all of your gear.

Once you're at the base of the bluffs on the rocks, you will have to paddle out a half-mile into the waves to get to the outer reef. As a word of advice, be very cautious when paddling out and NEVER turn your back to the waves.

We recommending standing down at the beach for a bit and watching the people surfing out at sea before getting in. Bring some binoculars so that you can watch and study the way they're riding.

If you get in the area and have trouble finding it, the locals are extremely friendly and can help you figure out where you need to go. 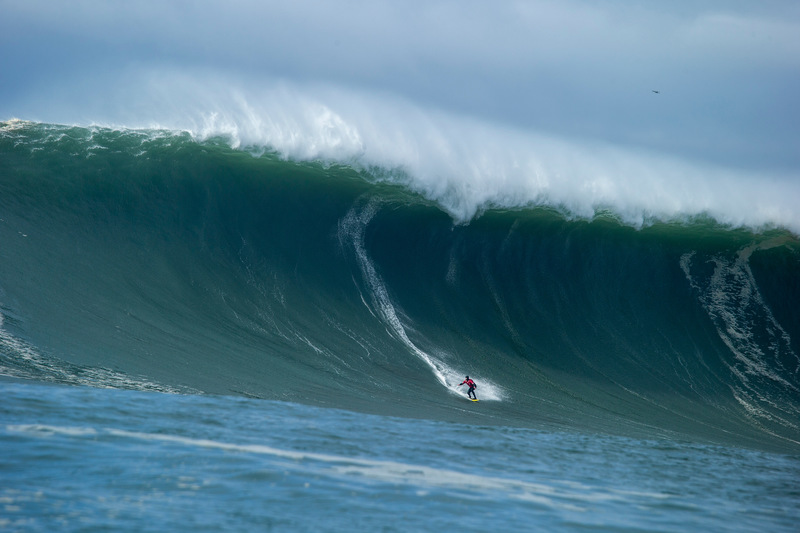 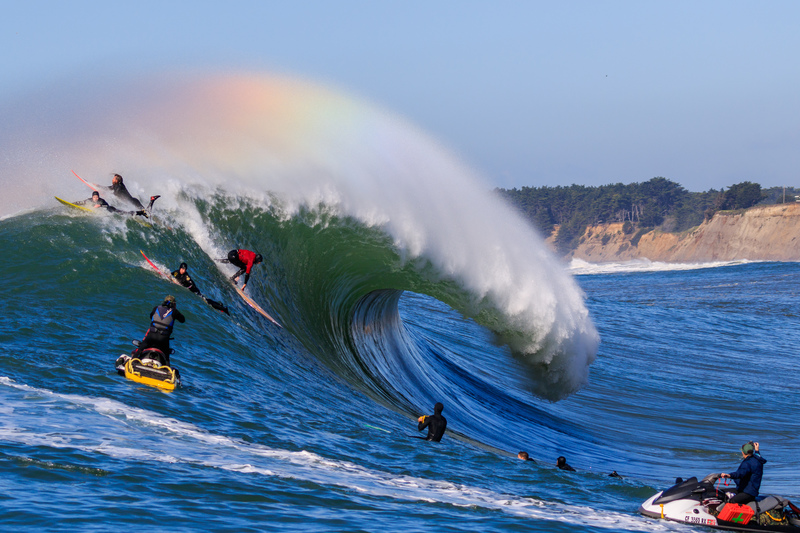 When Is The Best Time To Go To Mavericks?

If you want to visit one of the biggest waves ever surfed, take a trip to Half Moon Bay during the winter to enjoy some of the biggest swells. Breaks at Mavericks loom large during the California winter from November to March. January is the best month if you're looking for major waves.

During the winter, swells travel through from the North, pushing water over the reef, forming these massive waves. The beach surrounding the location will often disappear completely. Among the whitewater you'll find rocks poking out of the where beach would usually be.

If you want to enjoy the beach and get some mellower surfing in, head out to Mavericks during the spring or summer. During this time, the beach is very peaceful with rolling waves softly lapping the coast and slipping through the cracks in the rocks.

For those looking to explore the reef, spring and summer are the seasons to go!

PRO TIP: When you get to Mavericks, ask the locals about Outer Bowl. This is the location's most popular peak, which sits at the north end of the break.

Famous Surfers Who Have Ridden Mavericks

Here is a list of a few of the most famous surfers who have surfed the biggest wave in California. 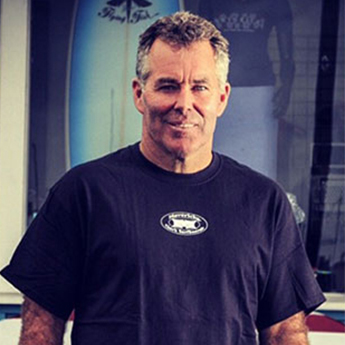 Jeff Clark was one of the founders of surfing in Mavericks Surfing Spot.

This local carpenter made Mavericks a regular spot back in 1975, surfing it without many others around for about 15 years.

He would often tell people about the massive wave at this surfing spot, though not many people believed him.

FUN FACT: Surfer Alex Matienzo gave Clark a painting of Maverick the dog overlooking the waves out at Mavericks, which is where the surfing spot got its name. 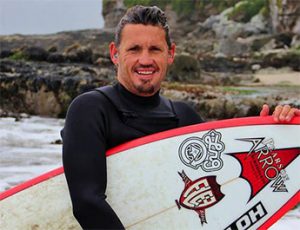 Darryl Virostko was the winner of the first big wave contest out at Mavericks back in 1999.

It was in that very same year that Sarah Gerhardt became the first woman to ride this massive break. The competition has been held here ever since.

This competition has been given many names over the years, including the Mavericks Challenge, Titans of Mavericks, Mavericks Big Wave Invitational, The Jay at Mavericks, and Mavericks Surf Contest.

Jay Moriarity, a 12-year-old student of Richard "Frosty" Hesson, became one of the youngest people to ever ride Mavericks.

On December 19, 1994, after four years of instruction, Moriarity rode this 35-footer in an elevator-like drop.

The ride ended up making headlines in surfer magazines around the world. 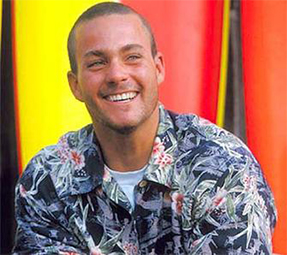 Some of our favorite movies about Mavericks include:

If you're ready to take on the best swell on the West Coast, there is no better place to visit than Mavericks. As one of the deadliest surfing spots and biggest waves in the world, it continues to instill high doses of fear and anxiety into the hearts and minds of the world's best surfers.

However, there is no better feat in a surfer's life than taking on the most dangerous challenges the ocean has to offer. When you feel ready to risk your life riding one of the most incredible breaks on Earth, Mavericks will be waiting.