Manta Rays and Stingrays belong to a fascinating family of sea creatures. But, what's the difference between stingrays and manta rays? Are they even really different species?

A lot of people get confused between Manta Rays and Stingrays, either believing them to be different names for the same species or losing track of which is which. As with any wild animals, it's important to be able to identify fish species correctly, especially since some can be dangerous.

Here I'll explain how to correctly distinguish between Manta Rays and their closest Stingray cousins, in addition to providing a host of facts about both of these fascinating animals.

Both Manta Rays and Stingrays are members of the same family of cartilaginous fish, which also contains all of the sharks. Unlike most fish, these species have skeletons made of flexible cartilage instead of bones.

Manta's and stingrays share some other basic features, including similar tail-like appendages, which lead some people to assume they are the same animal. This is most definitely not the case, however. Let's take a closer look at the difference between Stingray and Manta Ray species.

The largest ray of all is the Giant Oceanic Manta Ray (Manta Birostris), far larger than any species of Stingray and boasting a huge wingspan of up to 29 feet, measured between the tips of the wide pectoral fins. By contrast, the largest Stingrays e.g. Giant Freshwater Stingrays only reach a little over half that, at around 16'.

The other Manta species, Reef Manta Rays, have a maximum wingspan of just under 15 feet. This is smaller than the largest River Stingrays but still dwarfs the majority of Stingray species. 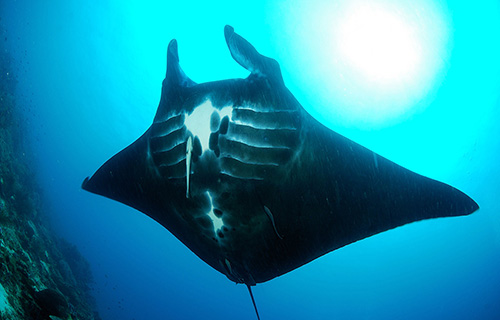 Size varies wildly within Stingrays. A few other species are close in size to the Giant Freshwater Stingray, while others are less than 12" in width. The smallest known species of Stingray is Potamotrygon Scobina, with an average wingspan of approximately 8-10". 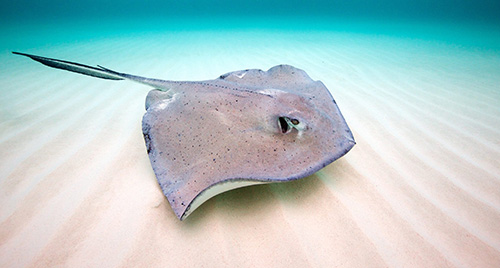 Perhaps the most significant difference between Stingray and Manta Ray lifestyles is in what (and how) they eat.

This filter feeding is achieved by swimming with their distinctive mouth wide open, and facilitated by structures called gill rakers.

These gill rakers help filter feeders to sift small prey from the water without the gills themselves becoming clogged up.

However, despite having been generally considered as filter feeders, Giant Oceanic Manta Rays have also been observed in deeper water opportunistically hunting smaller fish. A Manta Ray's mouth does have teeth and they are capable of swallowing significantly sized fish, given the size of that mouth. Some researchers have even suggested that these supposedly gentle giants are, in fact, primarily macropredators, perhaps gaining over 70% of their overall nutrition this way.

Unlike Manta Rays, Stingrays feed entirely by hunting around the ocean floor. They primarily prey on shellfish, crabs, and small fish, although they do also sometimes eat a range of other marine animals including squid and octopus. Most Stingrays are predatory carnivores right from birth, eating a similar diet to their parents.

Because they are primarily bottom feeders, a Stingray's mouth is located on the underside of its head to help them eat prey buried in the sand. Stingrays also use the barbed stinger on their tails to stun their prey before they eat it.

How to Tell The Difference Between Manta Rays and Stingrays

In adult specimens, the most obvious difference between stingray and manta ray species is their size. However, there are also some tell-tale signs in the body shapes and coloring etc., which can help you spot the differences, even when comparing Manta Ray Vs Stingray pictures without anything of obvious size shown for scale.

The flat bodies and enlarged triangular pectoral fins of Manta Rays are quite distinct. Although the general shape is shared with other types of Eagle Rays (their closest relatives), the pectoral fins on mantas have a much sharper, more pronounced point.

Their wide mouth sits at the front edge of the body and is fringed by two curved cephalic fins.

A Manta Ray's eyes sit on the sides of their head behind these fins.

Mantas have a small dorsal fin, located close to the tail. The tail itself is thin and does not contain any skeletal structures.

In Giant Mantas, there is a caudal spike by the tail which is an evolutionary remnant of the barbed spike that Stingrays use to inject their venom. 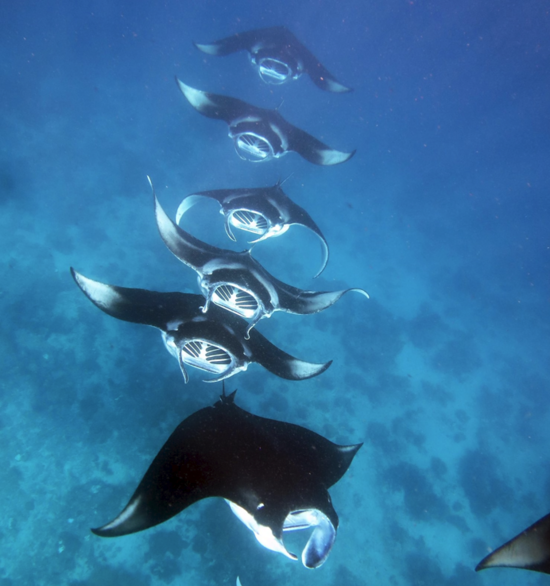 There also appears to be a rare genetic mutation that can cause Manta Rays to take on a pinkish color, as recently observed in an individual spotted near Australia's Great Barrier reef. 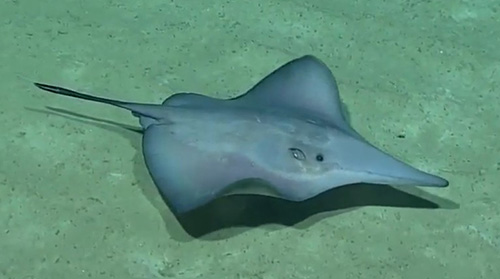 There are actually 8 distinct families of Stingray species, each of which have their own distinctive appearance:

Only the Eagle Ray stingrays (including Devil Rays) could potentially be mistaken for Manta Rays, having a relatively similar overall outline.

However, it is still fairly easy to distinguish them if you know what to look for.

Eagle Rays can be identified when compared to Manta Rays by looking at the head. Eagle rays have a narrower head shape, with eyes mounted high up, a protruding snout, and their mouth is on the underside of the head. They also lack the Manta Ray's uniquely shaped cephalic fins.

While both Manta Rays and Eagle Rays have large triangular pectoral fins, those of the Eagle ray do not have the white tips found in Mantas. Instead, the backs of eagle rays tend to be either a plain grey or spotted, depending on the species.

Both types of Manta Ray are migratory species found in temperate to tropical waters, although their patterns of movement are different. Reef Mantas prefer to remain in shallow coastal waters and range from the Indo-Pacific region to the East Atlantic.

Giant Oceanic Manta Rays tend to travel greater distances across the open ocean and are found wherever the conditions are suitable.

Manta Rays live for around 50+ years, with Giant Mantas being slower to reach adulthood than Reef Mantas. 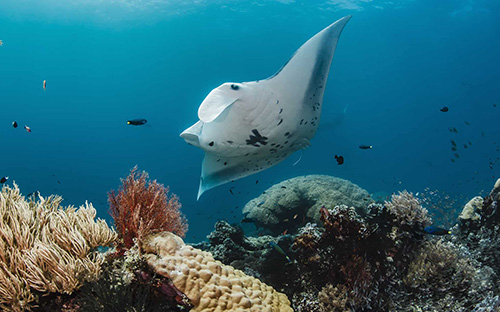 The former can take approximately ten years to reach sexual maturity. Although they are sometimes seen alone, Manta Rays can also travel in groups of 50 or more, and even sometimes seem to voluntarily associate with other marine animals including whales and dolphins.

Marine animals can be prone to parasites, and filter feeders especially need to look after their gills. Mantas appear to visit "cleaning stations", where cleaner wrasse or other small animals remove parasites they are unable to get to themselves.

Not at all. Even though they are known to hunt, Mantas are definitely gentle giants as far as people are concerned. When divers encounter them in the open ocean, they either ignore the humans completely or even show signs of friendly curiosity.

If only the same could be said by return. Both of the two species of Manta Ray are considered by the International Union for the Conservation of Nature as "vulnerable", due to a mixture of pollution in their native tropical waters, accidental capture in fishing nets, and even unregulated fishing in a few remaining countries. As recently as May 2022, fishermen in Mirissa Sri Lanka caught a beautiful 500kg Manta Ray, which was promptly sold as a "delicacy" 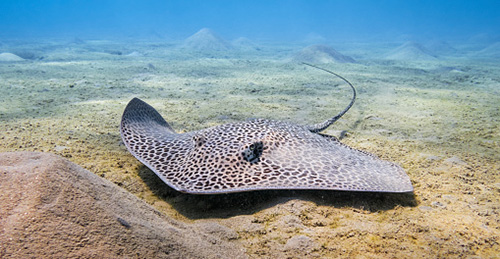 Although many stingrays share common features beyond their poisonous tail spikes, it's hard to make too many generalizations about their lifestyles. Most stingrays are bottom feeders and share a similar diet for example, but there are huge variations in size, habitat, longevity, etc.

Most stingrays live low in the oceanic water column, but some are pelagic and others are confined to freshwater habitats i.e. rivers.

There are even cases such as the Atlantic Stingray, which are equally at home in salt or freshwater environments.

Body shapes are equally diverse, aside from all having elongated tails. Many stingray species actually have an almost perfectly circular body plan (aside from the tail), quite in contrast to the Eagle Rays discussed earlier.

Stingrays are not usually aggressive toward humans. Stories of people being stung are almost always the result of defensive action, usually when someone has stepped on a ray, not knowing it was there.

In most Stingray species, the sting is painful but not especially dangerous. The spike is often barbed and can break off, so a doctor should be consulted to help remove it and prevent secondary infection. In the few cases where humans have dies as a result of being stung the cause has either been an allergic reaction to the venom

and/or, as in the case of world-famous naturalist Steve Irwin, because of specific circumstances leading to the sting occurring almost directly to vital organs.

Once again, we pose much more of a threat to them than they do to us, with several species of Stingray being endangered, largely due to the unscrupulous and unregulated fishing of an animal which does not breed especially quickly. 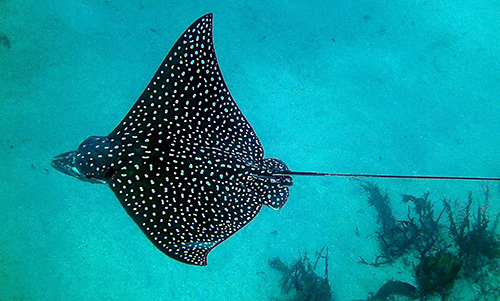