What is the largest ocean in the world? What is the difference between an ocean and a sea? How much water is in the oceans?

The body of water covering so much of the earth's surface is truly fascinating and often seems mysterious. The sheer scale and depth of the largest oceans make them hard to explore but people have been tirelessly investigating the world's oceans for centuries and modern technology is giving us better data than ever before.

For all who want to know about the largest ocean on earth, and the other oceans too, read on.

What is the Largest Ocean on Earth?

Which Ocean Is The Largest?

The Pacific Ocean accounts for almost half of the Earth's water surface. 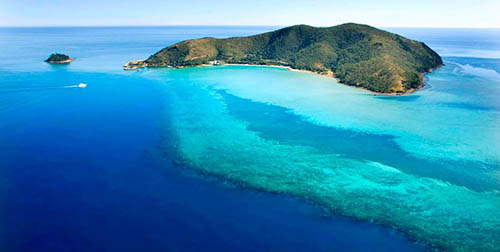 In terms of its width, the Pacific Ocean covers an enormous maximum distance of a little over 11,000 miles (including the seas at either end, measured from Panama to Peninsular Malaysia). From the South China Sea to the Panama Basin, the world's largest body of water spans so far that at the widest point it stretches almost halfway around the world and encompasses 12 time zones.

Volume-wise, a truly mind-boggling 171 million cubic miles of water are contained in the Pacific ocean, accounting for more than half of the seawater in the world. Just imagine, you could fit all of the planet's other existing ocean basins into the Pacific with room to spare!

Parts of the Pacific Ocean

Oceans are usually made up of several seas (more on this later). The Pacific ocean is so large as to constitute well over 30 separate named seas, with the biggest five each having an area of over 1 million square miles each. 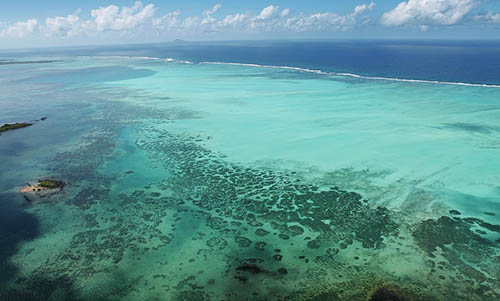 Which Ocean is the Deepest? 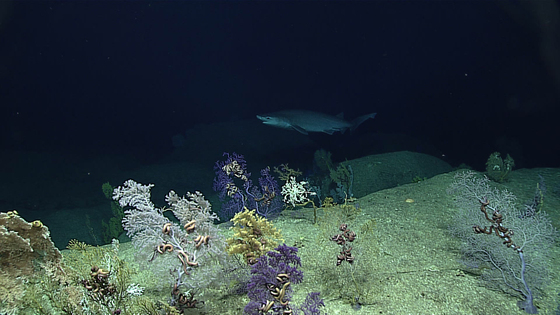 Not only is the Pacific ocean the largest ocean on Earth by surface area, but it is also the deepest.

The deepest point currently known to researchers is a section of the Mariana Trench in the western Pacific, with a maximum charted depth of approximately 6.8 miles!

Surprisingly, a host of animals thrive in the deep, dark Mariana trench.

In addition to the deepest place in earth's oceans, the next six deepest locations are also in the Pacific.

The deepest point of any other ocean in the world is the Puerto Rico Trench in the western Atlantic ocean, at just under 5.4 miles.

In terms of average depth, the Pacific ocean's impressive 14,040 feet makes it the world's deepest ocean, closely followed by the Indian ocean at 12,274 feet and the Atlantic ocean (11,962 feet). By contrast, the Arctic ocean is the world's shallowest ocean, with a mean depth of just 3,953 feet.

What Makes an Ocean an Ocean?

In order to understand the question of which is the largest ocean in the world, and why the Pacific Ocean is bigger than the others, it's important to understand what an ocean is and how we decide where one ocean ends and another begins.

All the oceans in the world are actually connected, so why do we consider them separate and how do we decide what makes one ocean distinct from another? What's the difference between oceans and seas?

The "world ocean" covers just over 70% of the earth's surface and contains approximately 97% of all the world's water. For geographical/cartographical convenience, we consider the sections of the ocean bounded by different sets of continents as separate named oceans.

The boundaries between all the oceans tend to be decided based on where specific currents meet or based on the position of land features such as the capes.

How Many Oceans Are There?

The basic system is to divide the main body of water covering the Earth into five oceans, based on which continents border them. However, there is also a common convention is to split the Pacific and Atlantic Oceans into their Northern and Southern parts.

The world's oceans are as follows:

The Pacific Ocean lies between the West coast of the North and South America and the Eastern edge of Asia/Australasia.

The Pacific is the largest ocean on earth, with the Pacific basin meeting all four other oceans at its extremities.

The pacific and Indian oceans are joined by the Australasian Mediterranean Sea, which is also considered part of the Pacific ocean basin.

In the Northern Hemisphere, the Bering sea connects the Pacific basin to the Arctic Ocean. 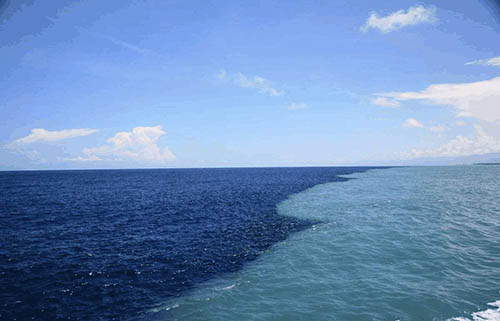 To the South, the Pacific meets the Southern Ocean and borders the Atlantic Ocean at Cape Horn in South America. 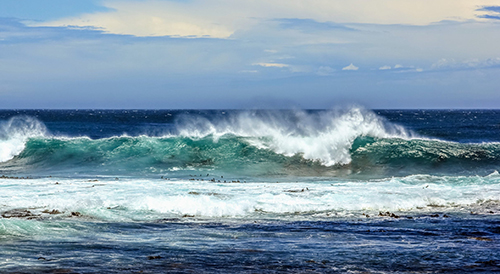 The Arctic Ocean comprises the seas around the North Pole.

The Arctic ocean basin is the smallest ocean in the world and has the shallowest average depth.

It is largely frozen over in winter, creating unique challenges for the wildlife around its coasts.

Where the Arctic Ocean meets the Pacific via the Bering Sea, the freezing of the 55 mile strait makes it possible to cross from Alaska to Siberia on foot. 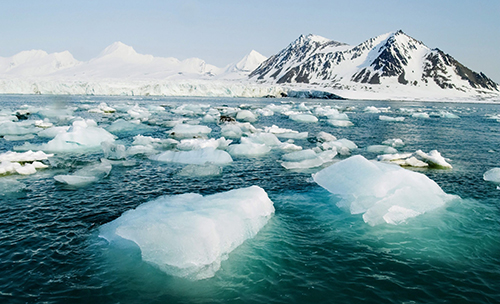 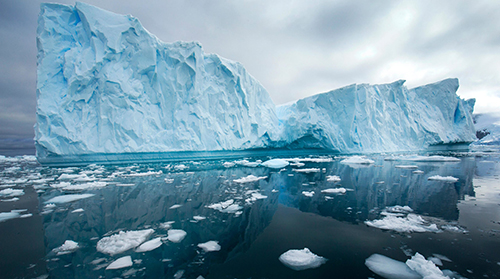 The seas surrounding Antarctica and as far north as Tierra del Fuego and Southern Australia form the Southern Ocean.

The Southern Ocean is also often referred to as the Antarctic Ocean or Austral Ocean, and is the fourth largest ocean in the world.

Where it meets the warmer sub-Antarctic waters, the cold, northward flowing waters sink, causing a distinctive pattern of currents known as the Antarctic polar front.

The Indian Ocean lies east of Africa, bounded by Southeast Asia and the Indian Subcontinent in the North and Australasia to the East.

The Indian Ocean, formerly known as the Great Indian Sea, is the third largest ocean in the world behind the Atlantic and Pacific Oceans.

It is also home to the world's fourth largest island, the iconic Madagascar.

The Southern and Indian oceans meet at Cape Leeuwin in Western Australia. 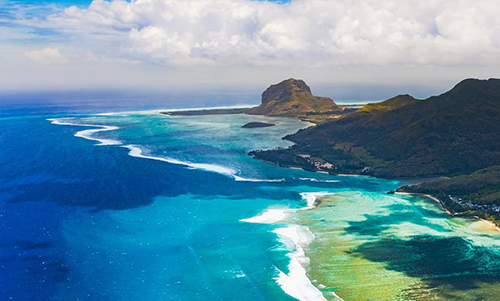 Are Oceans and Seas the Same Thing?

Most people use both words to refer to whichever large body of water they happen to be looking at. However, the word "sea" has a specific meaning, referring to a smaller subdivision within an ocean, usually distinct because of being partially enclosed by landmasses.

For example, the Caribbean Sea is the part of the Atlantic ocean next to Central America, whilst the Baltic Sea lies between Scandinavia and continental Europe. The Arabian peninsula is bounded by two long narrow seas, the Red Sea separating it from Africa, and the Persian Gulf. Both of these open into the Arabian Sea, with these neighboring seas all forming part of the Indian Ocean basin.

The Mediterranean sea is an interesting case, since it fulfills the characteristics of a sea (hence the name) but could also have been considered an ocean due to it's size and position between continents. There are also several bodies of water which are known as seas, but are really very large lakes e.g. the Caspian sea or the Dead sea. Being primarily fed and drained by rivers, these tend to vary significantly in salinity from the open seas/oceans.

How Important are the Oceans?

Covering more than half of the planet's surface and containing a staggering array of marine life, the health of the oceans is absolutely vital to life on Earth and especially for the wellbeing of the human race. Here are some of the main reasons we need to take good care of our oceans:

Sadly, we are already seeing the negative effects of human activity on the world's oceans. Reductions in marine life caused by overfishing and climate change, including the degradation of the Great Barrier Reef in Australia, demand urgent action.

Human waste is also taking over the ocean surface. There's so much rubbish in the ocean that one area of the North Pacific ocean is now known as the Great Pacific Garbage Patch, a swirling mass of floating detritus covering a million square miles.

The United Nations organization has designated June 8th each year as World Oceans Day, raising awareness of the importance of the oceans and fundraising for ocean preservation projects around the world.

​Difference Between Sea And Ocean