Little do many of us think about it, but we are surrounded by the remnants of the once-great dinosaurs.

When it comes to these giant creatures, people often wonder,

"What was the largest crocodile that ever lived?"

If you've ever asked yourself that question, then you've come to the right place. So come dive in with us as we explore the largest crocodiles in the world!

The world's largest crocodile ever recorded, based on fossil evidence, of course, was the Sarcosuchus imperator. This massive saltwater crocodile measured in at around 40 feet and weighed next to 17,600 pounds!

This massive saltwater crocodile was found in Agusan del Sur, Philippines, and eventually caught alive after a two-year battle. Many people suspected Lolong was a man-eating crocodile who had attacked several humans over the course of his lifetime.

Lolong died in 2013 due to congestive heart failure. 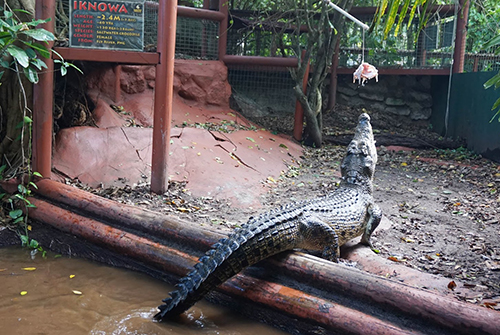 Crocodile hunters brought him to Green Island from Australia's Northern Territory (a 1,988-mile journey) by truck in 1987.

He currently lives in the Marineland Melanasi Zoo on Green Island, a unique zoo where visitors can see more than 50 crocodiles!

Brutus often frequents the Adelaide River, and stands out fo reasons beyond his massive size. For starters, Brutus is missing a front leg. Many researchers believe Brutus lost a leg while swimming in estuarine waters, where he got in a fight with a Bull Shark.

People estimate Brutus to be around 80 years old, which is quite old for an Australian saltwater crocodile.

FUN FACT: Many people who visit Australia take the Jumping Croc Cruise, which runs down the Adelaide River. Guides will often dangle bait over the side of the boat to get crocs to hop out. Take the tour and you might just get the chance to see Brutus! But don't get too close, these guys earned 4th place on our list of the most dangerous sea creatures!

While Cassius and Brutus take the trophy as some of the biggest Australian saltwater crocodiles in the world, there are some honorable mentions we need to shine light on.

One of those honorable mentions is Gomek, a saltwater crocodile that was captured in Papua New Guinea, where he eventually wound up in Florida's St. Augustine Alligator Farm. Gomek, who weighed around 1,896 pounds and was 17.75 feet long, had a surprisingly calm disposition towards humans and even performed tricks while living at the zoo! Gomek eventually passed away from heart disease in 1997.

Another honorable mention is Gustave, a Nile crocodile who was 17 feet long and weighed around 2,000 pounds. Many people refer to the Nile crocodile species as the "apex predator", and Gustave was Africa's largest Nile crocodile. It was rumored that he had eaten up to 300 people who ventured a bit too close to Lake Tanganyika and the Ruzizi River. Many also say that he not only killed for sustenance, but for pleasure as well.

We know that these saltwater crocodiles are massive, though many scientists believe prehistoric crocodiles were much bigger.

Let's take a look at some of the biggest crocodile species in the world.

The biggest crocodile that ever lived was the Sarcosuchus imperator.

​Scientists were able to measure its skull, which was about 5 feet 6 inches in length.

Its body was around 41 feet long.

If that wasn't terrifying enough, this giant crocodile had around 100 teeth in its skull, which allowed it to hunt larger animals, even though many believe it mostly ate fish. 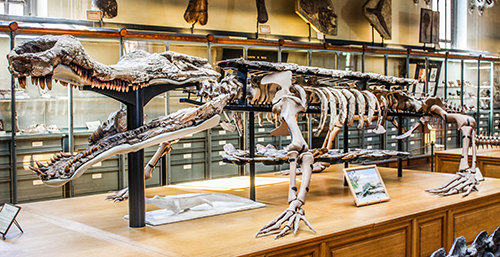 These giant crocs also grew a new armor plate each year, helping to protect it from even larger predators.

The largest fossils of this particular crocodile come from Niger's Sahara Desert.

The Purussaurus brasilensis was one of the largest crocodiles to have ever lived, weighing in at around 18,500 pounds. This killer croc resided in South America during the Late Miocene and was believed to have had very few predators thanks to its massive teeth.

FUN FACT: Scientists have determined that this giant reptile could bite with more than 15,500 pounds of force. 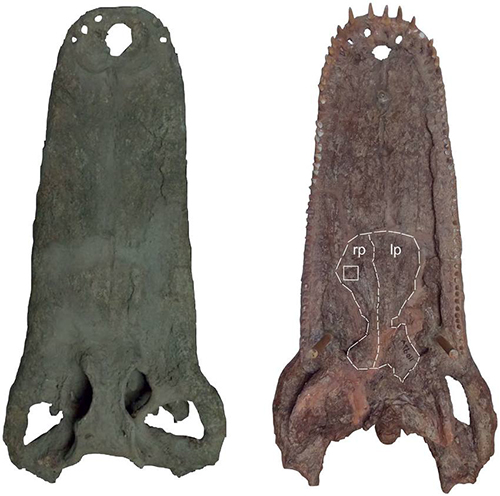 Scientists believe these massive crocodiles were split into ten different subspecies, the biggest of which could grow up to 39 feet 4 inches long.

These crocs could be differentiated from other crocodiles thanks to their duck-like faces, which had wide mouths, allowing them to scoop up their prey and swallow it whole.

The Mourasuchus lived in the regions around Brazil and Venezuela about six million years ago.

The Rhamphosuchus was alive during the Miocene period and lived in the region of present-day Pakistan. This massive crocodile grew up to around 36 feet long, according to a few fossils discovered by archaeologists during the mid-1800s.

This crocodile was unique in that it had a beak-shaped stout, which is why most scientists believe it mainly ate fish. However, it could have also easily eaten other animals that came close to its watering holes.

The Deinosuchus could grow to be around 35 feet long. Many believe this massive alligator was one of the early ancestors of the famed American Alligator, as the fossil record shows that there were many of them living in the eastern portion of the modern-day United States. However, some large fossils are also found in the Western Inland Seaway that date back to around 80 million years ago.

Scientists believe this animal weighed up to around 11,000 pounds, which was plenty large enough to crush other dinosaurs. 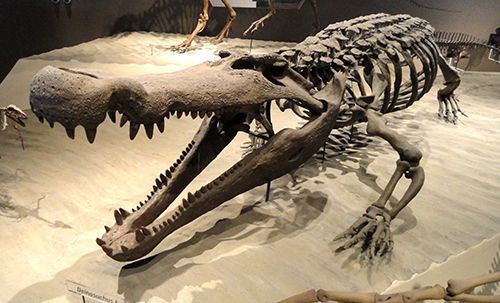 However, they also believe that it mainly ate fish.

One unique thing about this species was that it had specialized plates near its nares containing holes.  This is not seen in any other crocodilian. The function of these holes is unknown, but it has been proposed that they enabled this ancient species to breathe while underwater.

The ancient Gryposuchus croizati, which lived during the mid to late Miocene period, were believed to have been around 33 feet long, though multiple scientists suggest it could have been a lot bigger. Researchers found some of the biggest Gryposuchus croizati fossils outside of Venezuela's Urumaco Formation, some of which indicate that this crocodile could have weighed around 3,800 pounds or so. 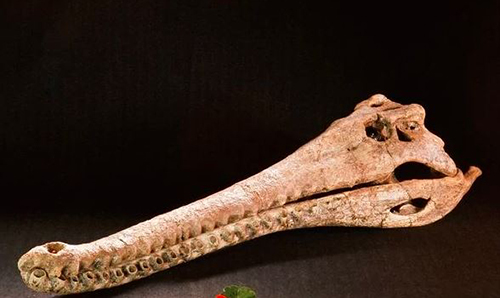 The Euthecodon brumpti lived during the Early Miocene and Early Pleistocene eras in modern-day Afirca and was known for its short snout.

The largest Euthecodon brumpti fossil ever found was in Kenya, though many fossils of this species have been found in the Turkana Basin, where it was believed to have dined on fish.

Many scientists speculate that this particular croc grew to be around 33 feet in length.

The Purussaurus mirandai was a 5,700-pound crocodile that measured around 32 feet 9 inches long. It was said to have lived in modern-day Venezuela around 7.5 million years ago.

One of the peculiar things about this particular crocodile was its extra vertebra, which was found in its spine, taking one of the vertebra out of its trunk.

Many researchers say this unique feature was the reason it was able to carry so much weight.

For more Crocodylia fun, head over to these articles!

How Fast Can An Alligator Run

Biggest Alligator In The World