While we often think of the great white shark as the ocean's most fearsome ocean predator, many ocean experts believe they'd be no match for the killer whale (orca)!

Orcas are larger than great white sharks and far more strategic. Plus, when researchers find the carcasses of great white sharks washed up on ocean shores, it becomes quite obvious that some have come to their demise by way of the killer whale.

Come dive in with us as we explore why we believe the orca would outmatch the great white shark in a battle!

Both killer whales and great white sharks are apex predators.

Great white sharks are incredibly voracious hunters, spending most of their lives in temperate ecosystems.

However, the great white shark is no match for the great killer whale, as killer whales are far braver, larger, and more strategic.

If pit against each other in a fight, killer whales would come out on top.

It's pretty clear when you see them interact in nature. 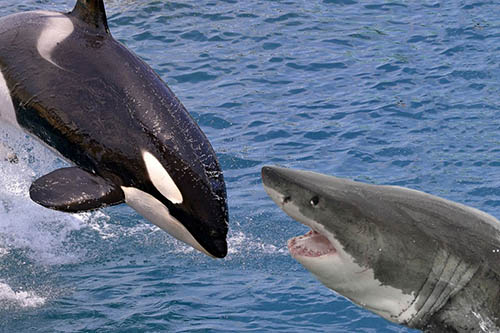 In 2009, a group of researchers set out to keep track of the movement of sharks, tagging 17 great whites while they spent a month hunting elephant seals. However, the moment killer whales arrived on the scene, these sharks brought their predatory habits to a halt.

In fact, the sharks fled the scene altogether, waiting for many months to return to the hunting area until they knew the killer whales were gone.

The one main advantage that great white sharks have over orcas is that they can maintain their swimming speed for much longer than orcas. Great white sharks can swim up to 25 mph for very long periods. Though orcas can reach speeds of up to 28 mph, they can only swim this fast for short bursts.

Typically, orcas cruise at around 8 mph.

Orca Vs. Great White At A Glance 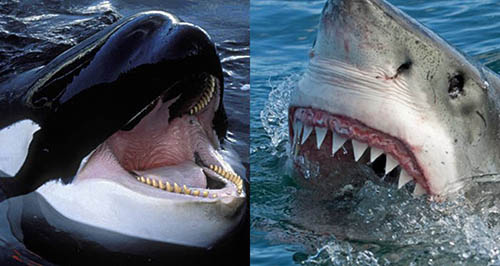 Orcas, unlike sharks, are marine mammals. They are the largest dolphin species in the ocean and the strongest predators on Earth. They received the "killer whale" nickname ages ago, as many sailors would see this apex predator killing other whales.

Of course, with such a strong moniker, people believe that these killer whales also kill human beings, which is not the case.

Orcas are quite unique in that they have the ability to adapt to almost any climate. They reside throughout the waters of the North Pole, South Pole, and the Equator.

Great white sharks are fish. While they might seem like the scariest and most aggressive predators in the ocean, they are actually quite careful and skilled when it comes to hunting. They really only fight when necessary.

You can find great white sharks on the Pacific and Atlantic sides of North America, dwelling near the coastlines. They are also often found in Australia, Japan, the Mediterranean Sea, and South Africa.

While great whites are incredibly strong and have purely carnivore diets, they won't feed on species that are larger than them. The only reason they'd eat larger species, such as whales, is if they were old, sick, or dead.

Killer whales can grow anywhere from 26 to 30 feet long, with males often growing larger than females.

They have very distinct black and white colors except for the small grey path that rests behind their dorsal fins. You can see white on the undersides of their bodies and flukes, as well as white spots behind each eye.

As we said before, the orca is an apex predator, meaning it sits at the top of the food chain. No other animal dares prey on an orca. They are always the hunters, and never the hunted. Orcas often prey on fish (including sharks), sea turtles, squid, birds, octopuses, and rays. However, many orcas have also been seen pulling seals down off the ice for a quick snack.

Orcas have a number of unique hunting techniques they employ, which is why they are able to have such rich diets.

For example, orcas preying on seals will breach out of the water and onto land to drag seals back into the water. They will also often form large hunting parties to take down larger prey animals and schools of fish, which is one of the ways they take down great white sharks.

The great white shark will hunt very similar animals, including sea turtles, sea lions, birds, fish, and other sharks. They use different hunting strategies depending on how large the animal that they're hunting is.

Sharks will use stealth to sneak up on their prey before inflicting powerful bites and waiting for their victims to fully bleed out before they consume them.

In some cases, one large bite won't do the trick. In this case, they will hold their prey down with their lower teeth and use the upper ones to tear away at their tissues. It's a pretty gruesome thing to watch. 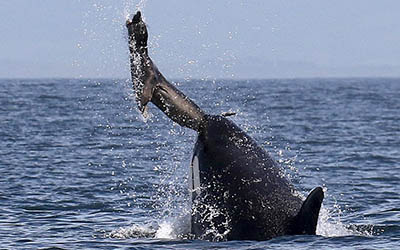 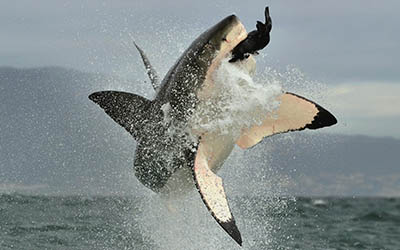 Great Whites Washing Up On Shore

We've seen many reports in the past of great white sharks washing up mutilated onshore due to killer whale attacks. In 2017, five great white shark bodies washed up in Western Cape Province, a small region in South Africa.

The sharks were pretty large, varying from around 9 to 16 feet.

Each shark had large puncture marks on its pectoral fins, and all of them were missing livers.

Scientists studying this event determined that the only predator that could have been capable of mutilating these large sharks like this were killer whales.

Orcas attack great white sharks for the same reason any predator would attack another creature — food. 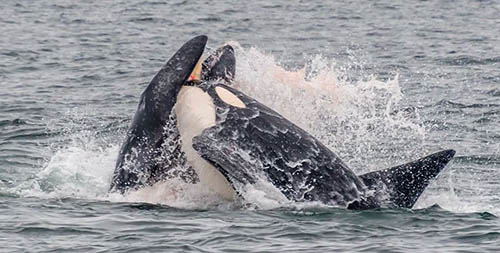 Often, mutilated great white sharks will have very surgical bites all over their bodies, which tells us that orcas enjoy certain cuts of meat.

The shark's liver, for example, is a delight for orcas. They also enjoy stomachs and testicles. Sharks contain very high fat and oil quantities, which is why they are so sought-after as food. Their livers are very large compared to other species as well.

Researchers have observed orcas flipping sharks onto their backs and holding them there for up to 15 minutes! When a great white shark gets flipped over, it goes into a state of tonic immobility, in which it is completely paralyzed. Once the great white is completely immobile, orcas will feed on its liver. The liver is a pretty good snack considering the fact that it makes up more than 25% of the great white's body weight.

Final Thoughts - Who Would Win In A Fight?

While the great white shark certainly has a reputation that one could only describe as "fearsome," it would lose in a fight against an orca almost every time. Orcas are not only much larger than great whites, but they are also much smarter.

While the great white is a warm-blooded animal, orcas still maintain much higher metabolic rates thanks to the fact that they have lungs and breathe air. This gives them more energy and the ability to eat more.

With all of that on the table, it's easy to see why any great white shark would flee the scene when orcas arrive.