From Kelly Slater to Laird Hamilton, there are many big names in surfing that people worldwide are familiar with. However, many surfers never quite reached the height of fame outside the surfing community, though still inspired surfers across the world.

One of those surfers was Jay Moriarity.

While Jay Moriarity died at the ripe age of 22, he became one of the biggest legends in surfing history.

Come dive in with us as we explore the life of Jay Moriarity. 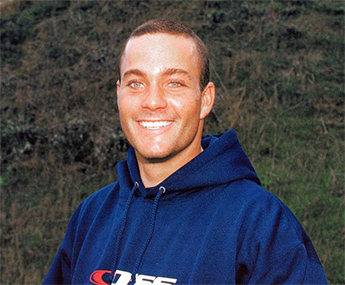 Most people find out about Jay Moriarity through "Chasing Mavericks," a 2012 film that portrayed him as a young surfer discovering one of the biggest waves in the world next to his home in Santa Cruz, California.

In the movie, Jay Moriarity enlists the help of Frosty Hesson, a local Santa Cruz surf legend, to train him.

The movie is based on a true story, detailing Jay Moriarity's life when he was just 15 years old, and surfing throughout Santa Cruz, California. He and his mentor Frosty Hesson embark on a quest to tame Mavericks, all while becoming close friends.

Who Was The Real Rick "Frosty" Hesson?

Rick "Frosty" Hesson was 45 at the time he met Jay Moriarity. At the time Rick met Jay, Jay was only 13.

Soon after they met, Frosty Hesson became a mentor for jay, developing a two-year training program, which involved hundreds of miles of swimming, many hours of paddling, and over 55 essays regarding surfing and the art of visualization.

Rick Frosty Hesson felt it was his job to challenge Jay so that Jay would be able to take on Mavericks with success.

It would be four years until Frost Hesson would allow Jay to surf Mavericks. 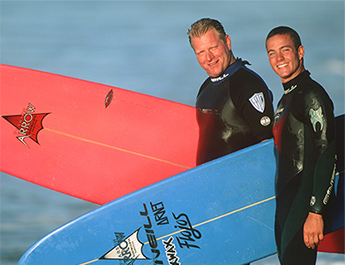 Before that, Frosty Hesson trained Jay for two years, not even allowing him to paddle out into Half Moon Bay for almost a year-and-a-half.

FUN FACT: Rick Frosty Hesson was on set during the making of "Chasing Mavericks," teaching actor Jonny Weston how to ride a longboard.

Jay began surfing big waves out at Mavericks, a famous cold water peak next to Pillar Point in Half Moon Bay when he was just a teenager. Contrary to what the movie implies, Jay Moriarity's first attempts at Mavericks were not wipeouts. In fact, he had been surfing Mavericks for a few months before wiping out on the big wave.

While he had surfed the wave back in April 1, 1994 at the age of 15, his flashiest attempt wouldn't come until eight months down the line.

Jay woke up early on December 19, 1994 and drove out to Mavericks with two 10-footers. Moriarity knew that the wind was strong that day, meaning he had to paddle hard and stay low to get through the waves.

When he finally dropped off his first wave of the day, a gust of offshore wind caught him on the lip, sending him free-falling 40 feet down into the flats.

Bob Barbour caught this unforgettable Mavericks wipeout with his camera. The photo was later given the nickname "The Iron Cross."

You can see the wipeout photo on the cover of Surfer Magazine in May of 1995, or you can watch a video of the wipeout here. 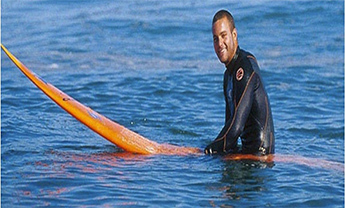 Jay Moriarity passed away on June 15, 2001, a single day before his 23rd birthday. Jay was spending time free diving in the warm Maldives water off the coast of the island Lohifushi. During the time, he was practicing holding his breath for his big wave surfing attempts at Mavericks.

What happened on June 15, 2001, is still unknown, though news spread fast throughout the big wave surfing community, shocking many friends and family members.

This Santa Cruz legend was getting ready to become a pro firefighter after passing his EMT Entrance Exam.

Luckily, before Jay Moriarity's passing, he was able to marry his long-time girlfriend, Kim Moriarity. Kim Moriarity was a significant influence on Jay's surfing and is featured throughout the movie.

His ashes were spread throughout Mavericks and Pleasure Point.

Bob Pearson, one of the most legendary surfers in Santa Cruz, designed surfboards for Jay Moriarity and Frosty Hesson back in the day. He remembers the young surfer very well, noting that Jay "taught people how to live."

If you drive around Sant Cruz today, you'll see the quote "Live Like Jay" printed on bumper stickers all around town. The "Live Like Jay" saying came from several surfers who spray painted it onto a wall in Santa Cruz as a sign of remembrance.

Over time, "Live Like Jay" began translating to "Be True To Yourself."

Where Did The Name Mavericks Come From?

There are many sources that point to two individual stories.

Some sources point to Jeff Clark, who opened up the Mavericks Surf Shop, while others point to Alex Matienzo, who reportedly paddled out into the waves one day with his two surfer buddies, only to look back and find his white-haired German Shepherd named "Mavericks" following them.

While locals in Santa Cruz never quite recovered from losing surfing legend Jay Moriarity, his spirit and love for surfing lives on. Many surfers still follow in his footsteps, surfing the incredible waves out in Santa Cruz.

We also recommend checking out "Inside Maverick's: Portrait of a Monster Wave" for an in-depth look at big wave surfing throughout Nor Cal in places like Santa Cruz and Half Moon Bay.