Jaws is considered to be the largest, fastest, and heaviest wave throughout the Pacific Ocean so one can imagine it's a hot spot for surfers to challenge its immense and unique opportunity.

It's the kind of wave that you see in the movies using special effects only it's real which is a staggering reality. However, this location has indeed been implemented in famous films for the realism effect and this proves how epic and monstrous this location can be.

Also given the name Peahi, this wave is located in Maui and is sought after by professional surfers who want to challenge themselves with an exhilarating experience as the wave thunders with approval.

In this location, one can expect the conditions to shift rapidly and it requires a keen eye to adapt. Needless to say, this experience is not for beginners

​The location of the sought after Wave

The wave is located in Maui and also goes by the name Peahi where it breaks over the deep-water reef creating a mighty crash that is sought after by surfers around the world.

Jaws surf spot is well known as one of the biggest waves in the world.

Although it can be a daunting and terrifying experience, it is equally exciting for experienced surfers who want to test themselves against nature's most intense waves.

It's not every day a surfer can effectively tackle this wave and it requires intense focus and skill to carry out this mighty task. 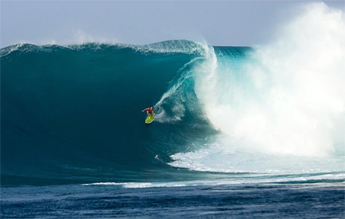 Nevertheless, there is no other swell on Earth like it and one can expect an experience that will stick with them for a lifetime. The impressive wave can reach heights of up to 70 feet and traverses across the Pacific ocean from the Alaskan Aleutian island chain all the way up to the Northern section of the Bering Sea. The location of this wave is important because the reef beneath the water facilitates the most amazing and eye-catching waves known to man because of the way it is situated.

It is truly a special spot for tourists and surfers alike with opportunities for picturesque experiences that elevate the senses and stimulate the imagination. Because of the special location, these gigantic waves can reach a speed of up to 30 miles an hour which is astounding!

Jaws is one of the biggest waves ever surfed. This incredible location has the potential to reach over 70 feet in height which is the size of a smaller skyscraper. Some people, including professional surfers, have claimed they have observed waves that were around 100 ft. tall at incredible speeds so the potential of this location is unparalleled.

It's rather frightening to think about it because you're essentially riding a roller coaster at a lower speed but the same height. In fact, it is even taller than some rides found at amusement parks and you aren't safely strapped in when you wipe out.

Because of the sheer size and speed of this wave, Jaws is a risky experience especially for those who haven't tackled similar waves of this magnitude. All one needs to do to gain perspective on this wave is visit a building and go to the roof while looking down to see how intense this experience would be. Imagine a giant slide of water and this gives you a good picture of what it would be like to surf on this otherworldly wave.

It is a legendary swell that leaves nothing to be desired for the professional surfer and over-delivers with a challenge that gives even the best a run for their money. Because of this enormous size, surfers have the option to choose lengthy routines that couldn't be accomplished otherwise, but it takes immense skill and self-control to manage the nerves.

History and People who have surfed it 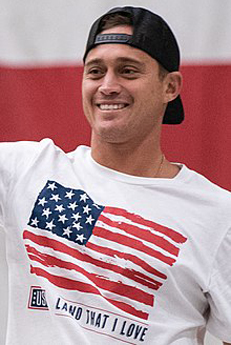 Makua Rothman is a famous surfer who recently caught a major wave in 2019 and has been listed in the past as the 2015 World Surf League surfer of the year.

The wave he conquered that day was so massive that it was pummeling jet skis in the water like they were toy boats in a bathtub.

It's important to recognize that this is a very serious endeavor because surfers risk their lives when paddling out to catch one of these unforgiving waves.

Another famous surfer who has conquered this amazing feat is Shane Dorian who paddled out to the unknown and came out victorious.

He is a prestigious surfer found in video games and other media who wanted to put his skills to the test.

There is always a risk factor which is why it's important that an inexperienced surfer never attempt one of the most aggressive waves on earth.

Jaws have been the wave of legendary feats and competitions throughout History where people seek to compete and prove who is the best surfer. Male surfers aren't the only ones who have taken on the amazing location. Paige Alms won a contest yet suffered a severe shoulder dislocation where her arm was nearly ripped off her body.

The attention this wave gets: Famous surfers and movies

As one would expect, this particular wave garners considerable attention from the media and this includes features in movies, competitions, and photography for stunning results. One of the most notable features of this location was in the James Bond movie "Die Another Day" where the opening sequence is carried out by stunt doubles Kalama and Doerner to accomplish one of the most memorable intros in film history. This wave is not a joking matter or something to take lightly as solely a fun experience. There are rocky cliffs that require a surfer's attention before they paddle out. One must be made aware of the risk factors of rocky cliffs in the event of a wipeout.

A surfer's worst nightmare is to get caught in the Jaws of this monstrous beast! This is why stunt doubles are absolutely necessary to accomplish safe practices and get a stellar shot. Historically, the best way to capture the wave is to traverse up high in a helicopter and take multiple photos successively to capture that perfect moment. The elements are definitely against sports enthusiasts when they attempt this feat, and it's an exciting occurrence when someone manages to conquer it and come out with no injuries or complications.

The science behind the Jaws wave

Boaters and surfers are both concerned with the science of waves and the implications they have for any given activity or sport. Ocean waves are a natural occurrence in nature that is generated by the wind. The wind blows on the surface of the water and creates friction that stimulates the sea surface. Because wind can be incredibly unpredictable and has an immense variance, we observe that the result is that waves are also hard to manage and are very free. Initially, capillary waves are formed which are smaller and less aggressive. However, when the wind continues to blow they can expand and continue to grow until you get an amazing wave with incredible surfing potential. The way a large wave is formed is through increasingly strong winds for a long period of time and across a long distance.

An interesting fact about waves is that they can travel thousands of miles from their original source so surfers can harvest the fruit of storms that originated elsewhere. There are two types of waves that can be generated and they include regular wind-driven waves and the ones that originate from a further source. Even if the water is calm it's possible to randomly get some amazing swells from distant storms so there is an intense element of surprise that surfers live for. Jaws is an example of a location that has both types of these waves and the most incredible ones are formed when the winds are at their highest speeds.