During the 90s, a few of the sport's most legendary riders took on this beast of a wave, forever cementing it into the history of surfing. Nowadays, you can find hundreds of surfers waiting in crowded lineups to get their chance at a wave when the right swell hits.

If you're looking to tame Jaws, continue reading to find out everything you need to know.

Where Is Jaws Surf Spot?

Jaws, otherwise known as the break of Pe'ahi, lies on Maui's north shore, just off the Hana Highway.

Surfers only started referring to this portion of Maui's North Shore as "Jaws" after a few crazy big-wave surfers, including John Potterick, John Robertson, and John Lemus, rode it for the first time back in 1975. When they went out surfing for the first time, they said that the conditions changed from small to MASSIVE in a matter of minutes.

The reason they referred to it as "Jaws" was because it reminded them of the unpredictability and fear you feel when you see a shark in the water. 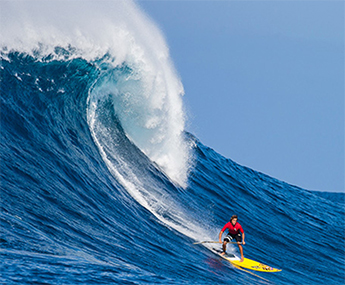 Note that you'll need a vehicle with 4WD to get there, as the dirt road is not 2WD friendly. Make sure to stay on the road while you're there, as many non-locals will drive through the pineapple fields to get there. This is private property, and driving off the main road ends up destroying neighboring crops.

When you're done with a day of surfing, continue taking Hana Highway around the island for one of the most incredibly scenic drives you've even been on.

A bit of key information for finding it: 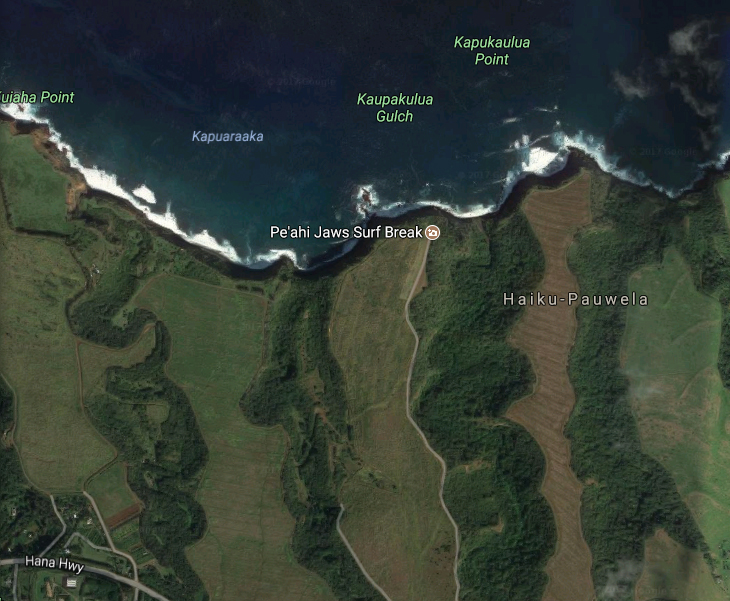 The Most Well Known Riders At Jaws Surf Break

In Hawaiian, Pe'ahi means 'to beckon.' However, back in the 90s, the surf break was far from inviting. There were only a few surfers who had the guts to take one of the biggest waves in the world.

Laird Hamilton and Dave Kalama were the first wild watermen after the three Johns to take on Pe'ahi and in doing so, they sent the surf break to popularity as well as cementing their names as legends that surfed one of the biggest waves ever surfed. These men were at the forefront of tow-in surfing during the 90s. The most proficient way to get beyond the chaotic bay was to get towed out during certain parts of the season.

A few other notable surfers to make Jaws the legendary spot today include Paige Alms, Maria Souza, and Kai Lenny.

Perhaps one of the most impressive Jaws wave riders is Mark Visser, who can often be found riding the monster after dark.

Tow-In Vs. Paddling at Jaws

Initially, people who went surfing Jaws would use a two-person tow-in system. One person would go out with a jet ski that had a rescue sled attached to it. The jet ski would tow the surfer, getting up to speeds of around 20-25 mph to better match the speed of the incoming waves, which were often about 40-50 feet high.

Of course, more and more surfers have been getting into the waves with solo paddle expeditions in the past decade. To do this, surfers had to paddle out into the whitewater from the Maliko Gulch or the rocky shores of Pe'ahi to get into the pounding ocean waves. Even now, you'll find many jet skis from tow-in surfing teams waiting in the water just in case something goes wrong. 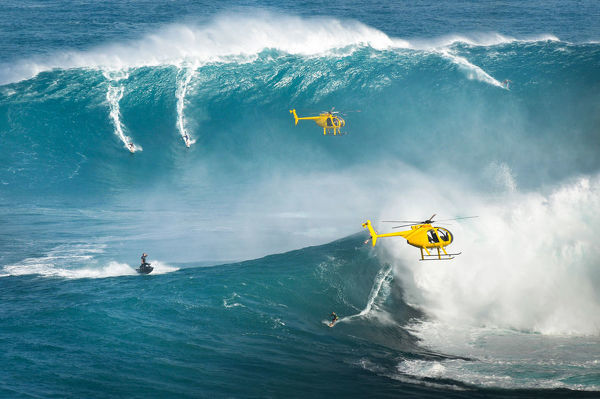 When To Surf Jaws

During your Maui vacation, you'll want to watch the surf report to see if waves are breaking on the North Shore. If the waves are less than 20 feet, you probably won't get a break. For Jaws to truly wake up, you need massive swell energy.

Make sure to check the winds as well. If the winds are stronger than 20mph, the quality of the waves will strongly diminish.

The underwater topography is composed of a deep water reef that throws the surf vertically during a good north or northwest swell. During the best days at Jaws, you'll find waves around 50 feet in height.

If you want to determine whether or not the surf is good the local way, head up to Pe'ahi Lookout, which is one of the best vantage points for Jaws on this Hawaiian island. To get up to the Pe'ahi Cliffs overlook, you'll have to drive on a 1.5-mile dirt road, which requires 4WD. Up there, you'll find a few places next to the road where you can park your vehicle. Just be sure that your vehicle does not block access roads, as you will get ticketed.

If you're daring enough for a three-mile round trip on foot, you can walk up to the lookout point with your boards.

Globally there are dozens of big wave spots, but the biggest wave surfed goes to Pe'ahi each year more than anywhere else. Billabong's XXL Global Big Wave tournament often lists Jaws as the world's winning break as well.

If you're ready to follow in the footsteps of the big wave surf masters, then Jaws is one of a few places in the world where you can see spectacular waves that will change your life. Just make sure that you have the proper training and stamina to take on its thunderous roar.

Make sure to time your trip to Hawaiian islands properly, as you'll often find big wave events taking place when conditions are prime. The best time to go surfing if you want to catch massive waves is during the winter months.

If you go at a good time, keep your eye on the surf forecasts or head up to the Pe'ahi vantage point to find the best day to paddle out.