Is The Megalodon Still Alive

The megalodon has gained somewhat of a mythical reputation over the past few decades.

As the largest shark that ever roamed the Earth, people can't help but imagine whether or not this giant predator is still lurking in the ocean's depths.

Is the megalodon still alive?

Come dive in with us as we explore everything you need to know about the all-powerful megalodon.

Do Megalodons Still Exist In The Marina Trench?

Despite what you may have heard on the Discovery Channel back in the day, true ocean experts say that there is no way the megalodon still exists in the deep oceans.

In fact, if it were still alive in the deepest point of the ocean, the Mariana trench, we would know about it at this point.

Researchers are aware of some interesting Mariana trench animals, but the megalodon is not one of them.

These massive sharks would be leaving telltale bite marks on large marine animals, of which no reports have been made. Plus, we would see thousands more megalodon teeth covering the ocean floors that we currently do, if they were still alive and roaming.

Beyond all that, the megalodon lived in warm waters rather than the colder waters close to the Arctic. Our depth of warm ocean knowledge is much stronger than that of the cold oceans, meaning we would have noticed a giant shark at this point.

The Extinction of the Meg 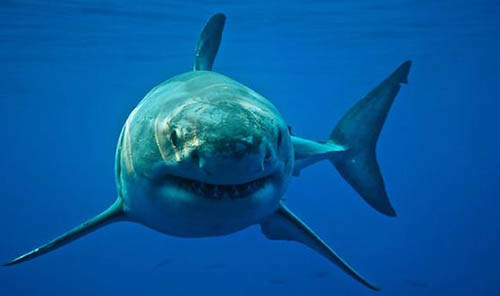 The megalodon went extinct near the Pliocene era's end, when planet Earth went through a phase of cooling. While we don't know exactly when the last megalodon existed, experts believe it was somewhere between 3.5 and 3.6 million years ago.

The megalodon wasn't alone in this global cooling extinction, however. Experts believe that a third of the world's large marine creatures went extinct when the world's temperatures plummeted, including sea birds and turtles.

This mass extinction was due to food chain disruption, which negatively impacted apex predators more than anything.

Was the Megalodon the World's Biggest Shark?

So now that we can come to the conclusion that the megalodon extinction was an event from long ago, the new question becomes,

Was this the biggest shark that ever existed?

Megalodon fossil evidence from around 20 million years ago provides us with the answer.

For starters, we know that these giant sharks roamed the oceans for more than 13 million years before they went extinct around 3.5 million years ago.

The only way the scientific community is able to make these size estimates is because of megalodon teeth. Because sharks don't have bones, we will never have a full megalodon skeleton, which means we have to base the size figures on the megalodon shark teeth. In fact, the term "megalodon" actually means "large tooth."

Megalodon teeth give us a surprising amount of information about this shark, including what it ate and what it looked like. 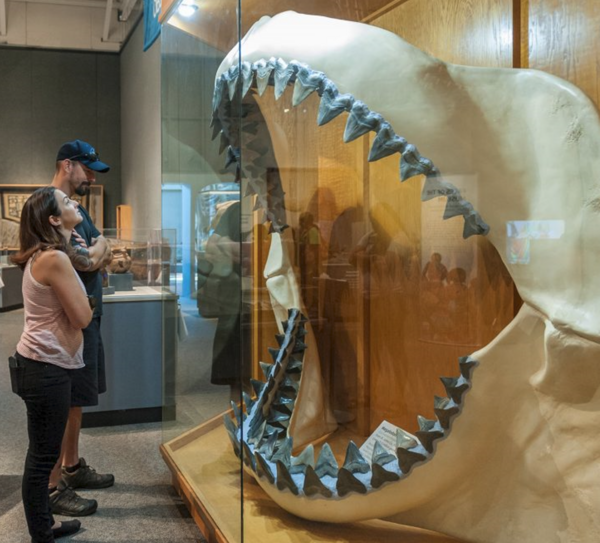 Scientists believe that with such huge teeth, this enormous shark most likely ate meat, including large fish, whales, and any other kinds of large marine animals it could wrap its jaw around.

It was also likely that it ate other sharks. With such a large body, eating large prey was likely a requirement.

One way that we know these megatooth sharks ate large creatures is through fossilized whale bones.

Scientists have found whale bones from more than 3.5 million years ago with the etchings of megalodon teeth in them.

Some of these whale skeletons include fossil shark teeth in them, which likely broke off during a predator-prey battle a few million years back.

One unique thing scientists have gathered from this evidence is that megalodons must have been able to open their mouths wide to tackle this kind of prey. Based on what we know about this megatooth shark, scientists estimate that their jaws could open anywhere from 2.7 to 3.4 meters wide.

To put that into perspective, this apex predator could have eaten two average adult humans standing beside one another in a single bite.

Fossil remains also tell us that the megalodon had around 276 teeth. Using information about its jaw and the number of teeth in its mouth, scientists also say that it likely had one of the most powerful bite forces in animal history — somewhere between 108,500 and 182,200 Newtons.

Again, to put this into perspective, the average human bite force is around 1,317 Newtons, while the average bite force of great white sharks is 18,200 Newtons.

Look at fake documentaries from the Discovery Channel or photos from typical reconstructions, and the megalodon almost looks like a great white shark, yet way bigger.

Evidence suggests this is an incorrect reconstruction.

The Otodus megalodon had a rostrum (nose) that was much shorter compared to the great white shark. Plus, their jaws were also a bit flatter than that of the great white.

Similar to the great white, however, the Otodus megalodon had ultra-long pectoral fins to support its massive size. The reason people typically reconstruct the megalodon as a large great white is because many thought they were related for a long time.

This shark was over 32 feet long.

However, there are also scientists who say the lineage of this apex predator stretches back even further. These scientists say the megalodon evolved from the Cretalamna appendiculata, a creature dating back more than 105 million years.

As scientists study the fossil record more and more, it is becoming quite obvious that megalodons lived alongside great whites. Many believe they may have competed with each other for food.

Where Did The Megalodon Live?

Information we have regarding the megalodon habitat has to do with where we find its teeth.

It is believed that the megalodon lived in tropical and sub-tropical waters throughout the world.

We know this because we have found megalodon teeth in deep seas around the globe in every ocean except the Antarctic.

Many megalodon teeth have been found off of the North American east coast, between the saltwater creek bottoms and coastlines of North Carolina and Florida. 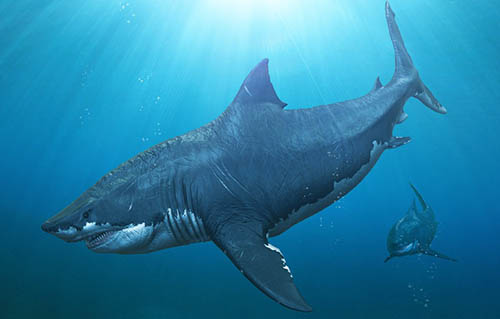 Megalodon diving is very popular around these parts, and you'll often find divers going into the dark depths to try and score a megalodon tooth.

Researchers say their teeth are also commonly found around Australia and Morocco, though you can even find them around the UK.

Why Is The Megalodon Tooth So Common?

The only part of the megalodon fossils that remain is the teeth.

One unique thing about sharks is that they continue producing teeth throughout their lives. Some sharks can lose entire sets of teeth every week, depending on what they eat. Many sharks can go through around 40,000 teeth during their lives.

With sharks constantly losing teeth to the murky depths, it is no wonder collectors are so easily able to find fossilized teeth on the ocean floor!

Another reason megalodon fossils don't contain skeletons is that shark skeletons are made of cartilage, which is the same material found in our ears and nose. Human bones and bones of other large marine animals are typically made of mineral calcium phosphate, which hardens and is fossilized much easier.

However, because its cartilage is so soft compared to its teeth, there are only very rare circumstances in which we find well-preserved soft tissue. With that said, we have found a few unique megalodon parts.

For example, megalodon vertebrae have been found, which are about as large as your average food plate. One megalodon fossil was said to have been found near Peru, which included a small string of vertebrae, the braincase, and teeth.

Though there is not much information surrounding this particular fossil right now, scientists say that it could help us craft a better idea of what these massive sharks looked like.

While the megalodon does not exist any longer, the vast ocean is still deeply unexplored, leaving us with millions of unanswered questions. In all likeliness, we'll eventually discover something just as incredible as the largest shark in existence.