By human standards, dolphins are some of the most intelligent animals on the planet. Many argue that they are smarter than any primates. With exceptionally large brains compared to the sizes of their bodies and incredible social and emotional capacity, they are, in many ways, just like us!

Like humans, they have their own language, use tools, solve seemingly complex problems, and stick with their pods just like we stick with our families and friends.

So, just how smart are these oceanic creatures, and how does dolphin intelligence compare to human intelligence?

Why The Dolphin Brain Is Exceptional

Over thousands of generations, the dolphin species have developed relatively large and complex brains to meet their environmental needs. In addition, dolphins have long used social interaction as a means of survival, meaning their brains had to adapt accordingly.

Here are a few reasons why dolphin brains are so expectations compared to other animals:

Cognition is a term we use to describe brain functionality at a high level. We use cognition to think, remember, problem-solve, and judge. Without cognition, perception, imagination, language, and future-planning abilities wouldn't exist.

In 2020, a research facility in Florida was studying bottlenose dolphins. They decided to blindfold one of the dolphins to see if it could still imitate the actions of its trainer and the other dolphins around it. To their surprise, this dolphin (Tanner) was able to tap into his hearing and echolocation senses, knowing that he did not have his eyes.

To decipher which pod member is "speaking," dolphins use complex communication systems.

Peter Tyack, a renowned behavioral ecologist, performed a study in 2000 on dolphin communication.

He found that every dolphin in the pod had a signature whistle to let other dolphins know where in the pod they were. 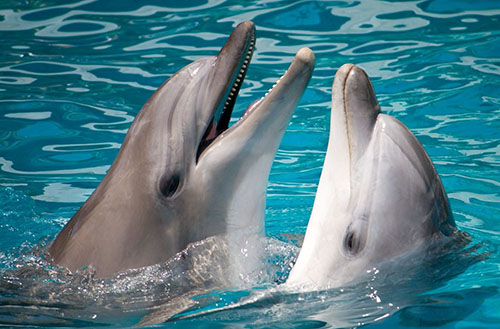 Further research showed that dolphins could carry conversations in complete "sentences" by stringing together various whistles and pitched pulses.

Like bats, shrews, and toothed whales, dolphins use a unique physiological skill known as echolocation. We think of echolocation as a biological sonar.

Echolocation allows dolphins to locate objects as small as a dime far off in the distance using sound waves exclusively. Sound waves travel 4.5 times faster in the water than on land.

With this unique ability, dolphins can find food sources and can alert themselves of potential danger in the distance.

Kelly, a bottlenose dolphin from Mississippi's Institute for Marine Mammal Studies, used gull baiting to show off her future-planning skills. The staff would give the dolphins a fish as a reward every time they cleaned up a piece of litter from the pool.

Kelly hid a piece of paper at the bottom of the pool and tore a small piece of it off to bring to the staff every time they came out with fish, as she recognized the piece of paper meant a reward. At one point, she realized that seagulls would earn her even more fish, so she began stashing the treats the staff gave her, using them to bait gulls instead.

It became clear that Kelly had a clear understanding of the concept of delayed gratification, something that other marine mammals and animals do not possess. 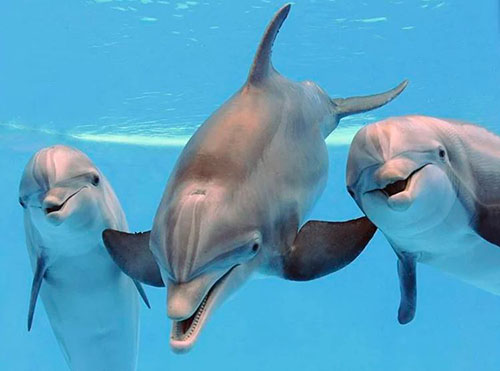 Perhaps one of the most important signs of emotional and social intelligence in these marine mammals is self-recognition.

To determine whether a certain species has self-awareness, humans will use the "mirror test."

During the mirror test, the administrator will anesthetize the animals and mark a portion of their body that they cannot typically see.

Then, once the animal wakes up, they will put it in front of the mirror to see if it tries to investigate the suspicious mark.

If the animal investigates the mark, it shows some semblance of self-awareness or self-recognition.

In 2001, two bottlenose dolphins were put to the test and passed with flying colors. In fact, the test administrators said these two dolphins showed human-like traits during the test, including "close viewing of the eye in the mirror" and "repetitive head circling."

At one point in time, we believed that humans were the only species to use tools. However, we now know that dolphins, similar to sea otters, crows, and primates, also use tools.

Back in the 1990s, researchers found Indo-Pacific bottlenose dolphins carrying sponges around on the tips of their noses to protect themselves while hunting in deep water channels.

While dolphin and human brains are different in many ways, they also have many similarities. For starters, dolphins have the unique ability to form complex social groups, solve complex problems, and change their surroundings.

They also possess the ability to have structured discussions in the way humans do.

Are Dolphins Smarter Than Humans?

While we're constantly coming up with new ways to test dolphins' brains, the most recent tests for dolphin intelligence indicate that dolphin brains do not possess the same cognitive abilities that human brains too, meaning humans are actually "smarter".

While dolphin behavior has made it clear that dolphins have cognition, to truly measure their intelligence, more information is needed.

For this reason, we've started to dive deep to look at their social and emotional intelligence.

In 20187, a study surveying numerous cetacean species showed that dolphins feel grief and experience complex emotions. The study showed these smart animals pushing deceased pod mates around in the water for many days, noting that they recognized death and felt strongly about it.

As for social intelligence, dolphins spend most of their lives with their pods, learning how to forage together, play together, and perform tricks together. They watch their pod members and pick up new skills along the way.

While social learning is frequent in many wild species, the techniques typically involve essential tasks, such as mating and feeding. Dolphins that teach each other tail-walking, a trick in which they skirt vertically across the top of the water, teach each other even though it has no necessary function.