How Long Do Seagulls Live

If you live by the coastline, then seagulls are very much a part of your life. However, even though we coastal dwellers spend a fair amount of our lives interacting with these birds, we don't know a whole lot about them.

For that reason, we're going to answer one of the most popular questions regarding seagulls, which is:

How long do they live?

The majority of seagulls have white and grey feathers, and they are closely related to tern species. 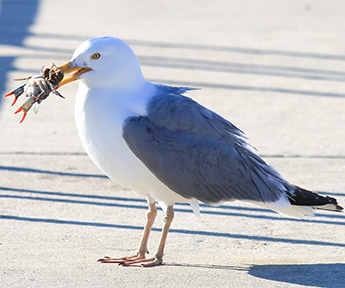 However, there are a few exceptions, including Bonaparte's gulls and Franklin's gulls, which obtain darker hoods during the breeding season.

On average, the lifespan of a seagull in the wild is between 10-20 years, though the species can significantly impact these numbers.

For example, herring gulls can live up to 30 years or more, while ring-billed gulls often live between 12 and 15 years.

However, several factors play into the lifespan of a seagull.

What Affects The Lifespan Of A Seagull?

A seagull's lifespan depends on a few different elements, including protection from predators, food availability, and climate. For these reasons, a seagull living in a zoo will often outlive a seagull living in the wild. With that said, if wild young gulls can survive the hardships of their first year, they have a much better chance at maintaining a prosperous life as each year passes.

In fact, most seagulls that survive the first year of life in the wild will die from natural causes.

Many seagulls are often the prey of other animals in the wild, including cats, sharks, weasels, and foxes, which is why seagulls living in the wild have it so much harder.

In the late 1890s, there was a record of an American Herring Gull named Gull Dick, who took trips to the same neighborhood for more than two decades. From October 12 to April 7 each year, he would visit the Brenton's Reef lightship in Narragansett Bay to feed on fish and bird-boiled pork. This famous Herring Gull offered us insight as to how intelligent these feathered creatures really are.

We now know that these birds have incredible memories. For example, they can remember a person's face and a set of garbage cans that they stored food at many days ago. Seagulls are also great with association, as they will often remember other seagulls as friends or enemies depending on their calls.

Seagulls, often referred to as gulls, live in low-lying coastal regions, coastal towns, and coastal cliffs. That's not to say that you can't find the gull species inland as well, hanging out in parking lots or next to dumpsters where they can find food.

Compared to other birds, gulls enjoy more variety in their habitat. As long as food is plentiful, they are more than happy living along the shore as well as deeper inland.

Gulls are scavengers for the most part, eating any kind of rubbish that is edible. However, they also enjoy prawns, shrimps, fish, marine invertebrates, and other small birds. If they can, they'd much rather scavenge for a dead fish in the harbor rather than catch one out at sea. It's also true that they love human food.

FUN FACT: Each day, a seagull can easily eat up to 20% of its body weight. Of course, seagulls are quite light at about 1.5 pounds each, meaning they only consume up to about three ounces of food daily.

Once a year, a female seagull will lay one clutch of eggs. Gulls nest in large colonies, and every female will lay anywhere between two to three eggs. How long the eggs take to incubate depends on the species of gull.

Many gulls will make nests from twigs, sticks, and stones, building them close to the ground for safety. Babies will stay close to the nest for the first five or so weeks after they hatch. Then, once they learn how to hunt or scavenge from their parents, they will venture out independently.

You probably see seagulls as a nuisance if you live on the coastline. These birds can threaten human safety and are known to damage crops.

More than any other bird species, seagulls collide with aircraft.

Most gull species build their nests next to heavily-populated human regions to scavenge food. Because they spend much of their time near water reservoirs, inland waterways, and dumpsters, they are high-risk disease transmitters.

With all of that said, the United States still protects these large birds under federal law and considers them migratory birds. No one can take seagulls from a specific region with a professional license or permit from the U.S. Fish and Wildlife Service.

Seagulls are long-lived birds that have existed on Earth for many thousands of years, which is why there are so many different species. As of today, we know of more than 50 gull species, though there are four main types, including:

FUN FACT: A large grouping of seagulls is referred to as a "colony." For a group of seagulls to be considered a colony, must be thousands of individual birds.

Seagulls Are Fast as Hell

Scientists have studied seagulls get up to speeds of up to 35 mph in the wild.

Seagull Poop Is Used as Fertilizer

Seagull poop, otherwise known as "guano," is used as fertilizer for crops and plants. However, guano isn't exclusive to seagulls, as this is the same term we use to describe the excrement of seals, bats, and seabirds that live in coastal regions or islands.

Guano is unique in that it is made up of nitrogen-rich ammonia salts. These salts are necessary for soil nutrients.

A Seagull Can Detect Food From More Than Three Miles Away

We know that seagulls are opportunistic feeders, though many of us don't realize just how skilled they are at finding food. With an incredible sense of smell, seagulls can detect the faintest whiff of food from more than three miles away. These birds have very sensitive nerve endings inside their nostrils called Jacobson's Organs, which allows them to more easily find dinner.

A seagull's ability to detect food is crucial to its survival. In addition to their keen sense of smell, seagulls also have excellent vision, which allows them to see objects located up to two miles away. In addition, with eyes on the sides of their heads, they get near-panoramic views of whatever they're looking at, giving them the ability to see predators from any direction. This is a major advantage, as they are able to escape much more quickly.

Many Gulls Return to the Same Nesting Site Each Year

The majority of seagulls return to their original nesting sites each year. After two years of being away, some seagulls can even return to the exact location, which is pretty impressive. Often, seagulls will use the same nesting sites for many generations, which is why human disturbance has become a significant issue.

They Mate For Life

Seagulls are much like humans in that they are monogamous creatures. They will find a mate and stick with them until one of them dies, forming a lifelong bond with their chosen mate. They will raise chicks, build nests, and find food alongside their partners. Female seagulls will often stay home and care for the young chicks or eggs, while male seagulls go out looking for various food sources.

Seagulls aren't the only ones we're interested in here at Center For Surf Research.

Take a peek at our marine creature lifespan articles!